Most lentil producers in Western Canada use pre-harvest desiccants in lentil for two reasons: to speed up crop dry down, which helps with ease and efficiency of harvest, and to achieve perennial weed control going into the next growing season. 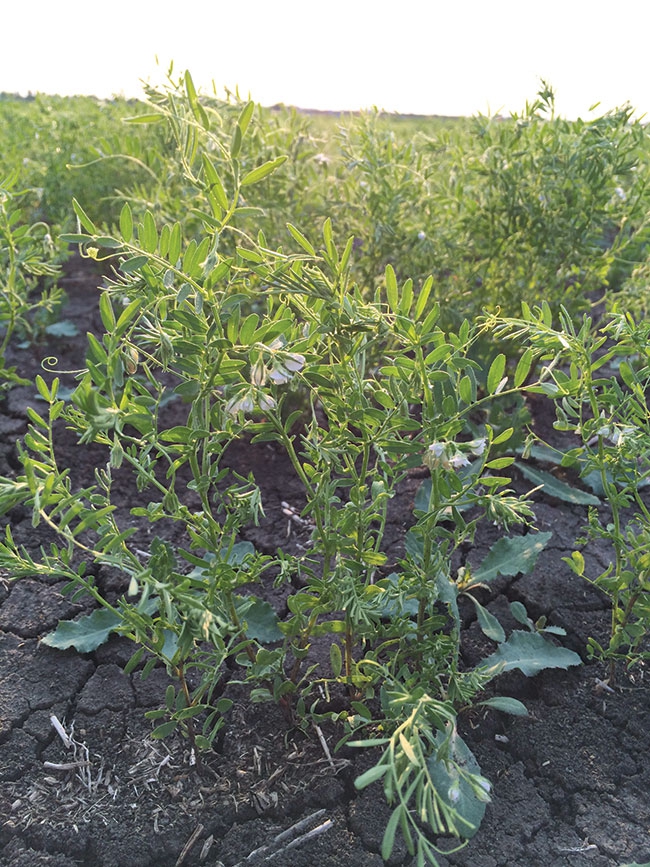 Glufosinate or diquat tank mixed with glyphosate had no effect on yield or seed weight. Most lentil producers in Western Canada use pre-harvest desiccants

But the wrong tank mixes – or the wrong timing – for desiccant application may result in unintended consequences.

In 2011, the European Union rejected a shipment containing Canadian lentils for exceeding its 0.1 parts per million (PPM) default maximum residue limit (MRL) for glyphosate. Following that episode, Pulse Canada reached out to the University of Saskatchewan, asking researchers to look into growing conditions that might precede similar trade issues in the future.

“In 2013, after a year or two of hard lobbying, the EU did increase the glyphosate MRL to 10 PPM, but at the same time we had already begun our research to build on the things that were known in other pulse crops about glyphosate used as a desiccant in combination with other products,” says Christian Willenborg, an associate professor in the university’s department of plant sciences.

Similar work had just been initiated in bean crops by researchers at the University of Guelph, so Willenborg and his graduate student, Ti Zhang, took their inspiration from that project.

From 2012 to 2014, they conducted field trials in Saskatoon and Scott, Sask., to test whether a variety of desiccants applied alone or tank mixed with glyphosate improved desiccation and reduced the potential for high glyphosate residue in lentil seed.

The researchers found the best combinations were glufosinate or diquat tank mixed with glyphosate.

“Basically, glufosinate and diquat, when they were mixed with glyphosate, were the most consistent, and resulted in a general reduction in seed residues,” Willenborg says. These treatments had no effect on yield or seed weight.

By contrast, saflufenacil didn’t result in the reduction in residues the researchers were looking for. Pyraflufen-ethyl and flumioxazin didn’t have an adequate effect on dry down and also failed to consistently decrease glyphosate residues.

Timing
The right desiccant combinations are not the only consideration for growers hoping to optimize dry down and minimize residues. Timing is another major factor.

“Applying too early can result in high herbicide residue levels concentrated in the seed and it can also detract from crop yield and quality,”
Willenborg says. “If you’re a seed grower, applying glyphosate too early can often inhibit germination for the following year. It detracts from yield because if you get it too early you’re stopping the plant from filling those seeds.”

Proof that desiccants are being applied too early comes in the form of shriveled seeds and higher residue levels later on.

But desiccant application timing is a catch-22 situation for many growers.

“Part of the reason it’s happening too soon is that it’s hard for growers to time it exactly, and the other reason is pragmatic. We have big farms and, when frost is coming, they need to get that product dried down and sometimes they have to pull the trigger,” Willenborg says. “Maybe it’s not the best time, but they have to get that crop off.”

A second aspect of Willenborg and Zhang’s desiccant study looked at application timing. Results from this component of the study were published early this year in Agronomy Journal.

Treatments were applied at seed moisture content levels ranging from 20 per cent to 60 per cent. Based on residue levels and crop yield and quality, the researchers concluded applications before 30 per cent seed moisture resulted in detrimental effects.

“Regardless of the product chosen, our results with respect to seed residue levels show it is imperative to ensure applications of glyphosate or saflufenacil are not made prior to the 30 per cent seed moisture stage,” the authors concluded.

Willenborg suspects premature application of desiccants is happening in other crops as well. He’s just begun a similar study in fababean, for which good desiccant choices are not known. Willenborg says it’s possible tannin and non-tannin varieties have different responses to treatment. He’s also working on a major oat research project instigated by a push from grain millers to reject oats treated with pre-harvest desiccants.

Further research is needed to look at the effects of desiccant products and application timing in many crops, but for now the chapter’s closed on lentil. All that remains is getting the word out to growers.