Just over 20 years ago, researchers initiated the first bioherbicide research and development program in the country at Agriculture and Agri-Food Canada (AAFC) in Saskatoon. Led by Karen Bailey (who recently retired), the program has made significant advancements in bioherbicide development for horticulture and turf crops, and more recently, promising solutions for agriculture. Bioherbicide product development is a welcome addition to the integrated weed management toolbox for crop production. Biopesticides are classified as “reduced-risk” products by the Pest Management Regulatory Agency (PMRA). 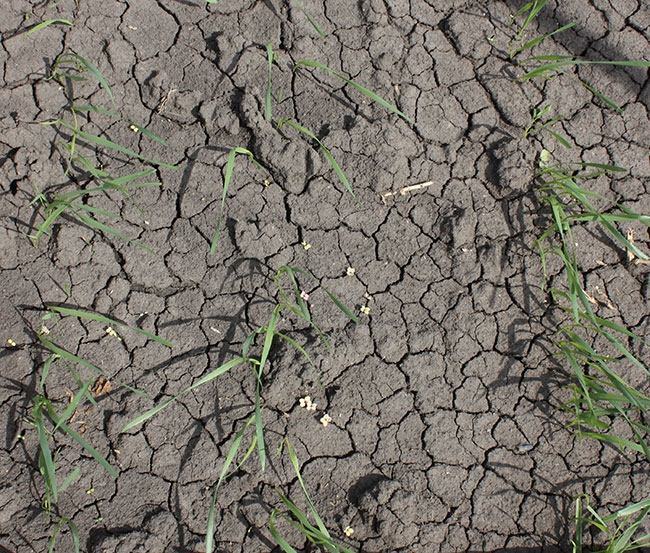 Wild mustard and wheat following the application of the bioherbicide Phoma. Just over 20 years ago

First discovery
Bailey was the first to discover a local fungus that naturally infects Canada thistle, causing plants to die, which set in motion the research and development program for a potential bioherbicide for horticulture and turf vegetation. By the early 2000s Bailey and her team had identified and patented the most effective isolate of Phoma macrostoma. Since then, they have been working with industry partners to isolate and produce Phoma and to collect the multiple years of data on multiple crops required by regulators. In 2011 and 2012, P. macrostoma was registered for broadleaf weed control in turf grass in Canada and the United States, respectively. P. macrostoma controls Canada thistle and other broadleaf weeds such as dandelion, clover, wild mustard and others.

Russell Hynes, a research scientist at AAFC in Saskatoon, began working with Bailey in 2007, and for the past five years has been leading the efforts to help advance the research and development work in agriculture crops. “The alfalfa seed growers in Saskatchewan and Alberta funded some of the first agriculture field crop research to see if Phoma could be used to control Canada thistle and wild mustard,” Hynes explains. “Regrettably, the research showed that in the first year of establishment alfalfa was sensitive to the product. However, in year two and in subsequent years, alfalfa proved to be quite tolerant of Phoma applications, and provided good control of Canada thistle, wild mustard and other broadleaved weeds. Early and mid-season applications were more effective in reducing weed numbers and biomass than late season applications.”

Hynes began working on Phoma broadleaf control with other field crops in Western Canada, and after achieving proof of concept of good activity, additional funding from the Western Grains Research Foundation helped expand the program to include studies on crop tolerance and residual effects. Greenhouse experiments provided some background information, but researchers needed to find out what happened in the field.

“In 2015, we started new field experiments both under dry land conditions at the Saskatoon Research and Development Centre and replicated under irrigation at the Canada-Saskatchewan Irrigation Diversification Centre in Outlook,” Hynes says. “Various field crops … and horticulture crops were used in the trials, including wheat, barley, peas, lentils, soybeans, canola, flax, potato and corn. Two varieties of each crop were seeded into replicated research plots at both locations. Treatments included two doses of Phoma applied as a dry granular formulation at seeding to control weeds and monitor crop tolerance.”

The results from the first year indicated Phoma was very successful for cereals, corn and potatoes, showing no effects from application. However, there was a lack of tolerance by pulse and oilseed crops, with peas, lentils, flax and canola being sensitive to the treatment. The results provided a good indication of which western Canadian field crops Phoma could be used on. In 2016, the sensitive crops were grown on the previous plots to determine if there were any residual effects on crop tolerance. The results did not show any residual effects on any of the crops. Hynes adds they were very pleased with the results because they mean growers can follow their traditional crop rotations, using Phoma on cereals for weed control, without concerns of any impacts or any limitations on subsequent crops.

Recent research shows promise
In 2016, researchers also compared granular treatments of Phoma at different application timings, including at seeding and in-crop. Plots of wheat and barley were seeded together with wild mustard and other weeds, and initial results showed very good control at both timings. “We are also working on developing different formulations for agriculture use,” Hynes explains. “The formulation for turf grass applications is in granular form and will be economical for the company who is going to advance this product into the market for turf. However, formulation development for agriculture use has to be considerably less expensive, so we are looking at different scenarios about how to control weeds with both spray and granular applications. In 2017, the first experiments with a spray application will be trialed, at both an early stage and after weed emergence, which may be more economical.”

Researchers continue to advance their understanding of exactly how Phoma moves into the plants and the complex mechanisms of control. Hynes and his colleagues published the results of an in-depth study in 2015, outlining more precise details of how Phoma metabolites are taken up by the plant roots, causing phytotoxicity to the plant and providing control. The study showed the Phoma micro-organism produces secondary metabolites (macrocidins) that are taken up by the roots and moved through the plant into the young growing leaves. The metabolites interfere with the photosynthesis of the plant, preventing it from producing chlorophyll, eventually inducing chlorosis, bleaching and plant death.

Researchers also realized higher levels of the metabolites in P. macrostoma formulations correlated with improved weed control, which also points toward new strategies for developing a bioherbicide that would be more effective at lower doses, and therefore more cost-efficient.

Hynes explains the principles of a Phoma treatment follow the exact same process growers use when inoculating pulses with rhizobium micro-organisms.

“The Phoma micro-organisms are applied in a large dose, upwards of 1,000 times or more than what would naturally occur, either as a granular or a spray application, inundating the target broadleaf weeds and providing control. Studies measuring Phoma populations showed that the fungus was detected in soil at one, two and four months after application, but was not detected after 12 months. It also was not competitive with other naturally-occurring soil micro-organisms and fauna, all of which makes the use as a bioherbicide very attractive.”

After years of research and development efforts, Hynes says to expect an exciting announcement early in 2017 around the turf registration and products. As for agriculture, the research work on crop tolerance, formulations, timing and other aspects will continue in 2017 and over the next few years. “We will continue our work with cereals, potatoes and other crops with good crop tolerance to Phoma. We will also be focusing on spray application formulations, which we expect will be more cost-effective than granular formulations. Although granular formulations may be suitable for smaller areas or weed patches in agriculture operations, spray applications will likely be more cost effective for larger fields.”

The regulatory approval steps will take another few years, so growers will have to wait a bit longer before a commercial Phoma bioherbicide product is registered for use on agriculture crops. But when it is registered, it will be a welcome addition for integrated weed management programs.