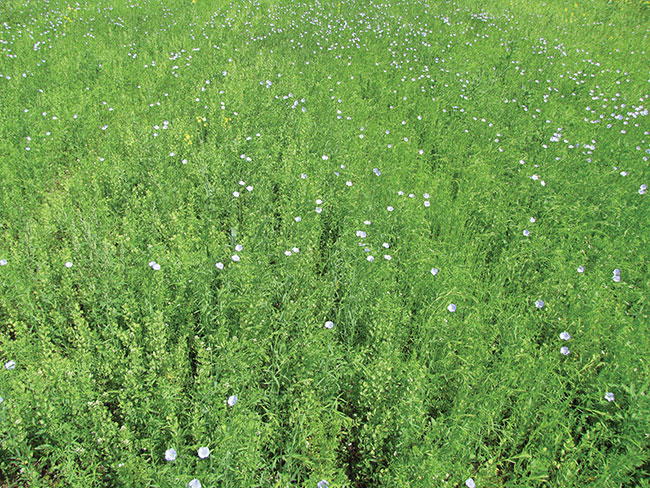 Organic crop production has been shifting to the use of legume green manure, diversified crop rotations and reduced tillage, rather than relying on summerfallow and mechanical tillage for nutrient and pest management in the semi-arid region of the Prairies. Different agronomic practices, such as crop rotation and tillage intensity, can affect the economics of production systems.

“In 2010, we initiated a six-year field study to determine if organic wheat production using diversified rotations and reduced tillage could optimize production, while minimizing its environmental impact,” explains Myriam Fernandez, research scientist with Agriculture and Agri-Food Canada (AAFC) in Swift Current, Sask. “We compared the impact of two crop rotation sequences, simplified and diversified, and two levels of tillage intensity, high and low, on the economics of organic production in the semi-arid Brown soil zone on the Prairies. We evaluated grain yield and quality, as well as soil fertility and quality as part of a larger project.” The project was funded by the Western Grains Research Foundation and Agriculture and Agri-Food Canada, through the Organic Science Cluster II.

The two cropping sequences included a simplified rotation of green manure-spring wheat, which has become a standard practice used by most organic producers in the semi-arid region. The diversified rotation included green manure-oilseed-pulse-spring wheat. The oilseed crops rotated between flax and yellow mustard, while the pulse crop alternated between field pea and lentil. The tillage treatments compared “high tillage,” with at least one tillage operation prior to seeding, and “low tillage,” which was designed to reduce tillage frequency to only as-needed to prepare the seedbed and control weeds. Due to a persistent increase in perennial thistle populations, a fall tillage was added to all plots in year four and five of the trials. All phases of the rotations were present each year. Precipitation throughout the study period was substantially greater than the long-term average.

“The economic analysis considered the impact of rotation and tillage intensity on the cost of production, gross return and gross margin of all crops, including the break-even prices and yields,” explains economist Buwani Dayananda. Co-authors include Prabhath Lokuruge (AAFC), and Bob Zentner and Mike Schellenberg (AAFC, retired), with input from the Advisory Committee on Organic Research for the Swift Current Research and Development Centre. “The annual costs of production were estimated for each tillage and crop rotation using input costs for labour, seed, fuel, repairs and maintenance of machinery for each year. The crop returns were based on conventional prices compared to organic price premiums for crops over the time of the trials.”

As expected, the results showed a diversified crop rotation did result in greater farm profitability than a simplified crop rotation. The analysis of the break-even prices showed that organic price premiums have a large impact on the profitability of lentil, mustard and flax. During the six years of this study, these three crops improved the profitability of the diversified rotation. However, field pea, due to higher seed costs and lower yields, was the only crop with higher break-even prices compared to conventional crop prices. Therefore, in this study field pea was not an economically profitable crop.

“Although we expected to find that reducing tillage intensity and the combination of reduced tillage intensity and a diversified crop rotation would further enhance farm profitability, the study results did not show this,” Dayananda says. “Our economic analysis showed that the five-year average gross returns and gross margins, with and without organic price premiums, were significantly higher for the high tillage compared to the low tillage treatments. It was only in the first year of the study that gross returns for low tillage were higher than for high tillage. What our results showed is that gross returns for all the cropping systems displayed a declining trend over time, mainly reflecting the steady decline in crop yields due to increasing perennial weed pressure and lower soil nitrate levels.”

The study showed higher wheat yields overall under high tillage and a simplified rotation. The organic wheat yielded an average of three-quarters of conventional wheat in a nearby no-till study with a similar rotation, and an average of 85 per cent of commercial crops in the same region. The protein concentration of organic wheat was similar to or higher than the average for the commercial conventional wheat. However, the oilseed and pulse crops did not show the same yield decline over the years. The grain yields for flax and mustard were also higher under high tillage, but yields were higher for lentil and field pea under low tillage.

Fernandez notes that, traditionally, annual precipitation in the Brown soil zone of the study is limited and highly variable. However, over the six years of the study, precipitation levels were persistently above average, especially in the first three years, with a very unfavourable rainfall pattern in 2015. This resulted in increasing perennial weed competition and decreasing yields under the low tillage treatments, suggesting that, under these higher precipitation conditions, the low tillage treatment did not appear to be viable for more than a few years. This would need to be followed with some tillage to achieve adequate perennial weed control.

Organic spring wheat (pictured) was the main crop of comparison in the trials at AAFC SCRDC.

Reduced or lower tillage intensity systems remain a priority for organic production systems, and this study shows the necessity of being flexible and considering strategic tillage. “There can be good reasons for adding an occasional use of more intensive and frequent tillage to help mitigate the adverse effects of perennial weeds when levels become unmanageable; [also, it] can contribute to increased N mineralization in the system,” Fernandez says. One example: after the 2016 season, when there was a lot of precipitation and higher levels of diseases such as Fusarium, some no-till growers added a tillage operation. “This idea of strategic tillage is gaining interest [from] both organic and conventional growers, and recent research in Australia and elsewhere is providing more information. Tillage is another tool when needed, and adding a strategic tillage once every few years likely won’t negatively affect soil quality.”

“It is important to emphasize that our economic results were based on this field trial and the conditions and prices during the time frame of the project,” Dayananda says. “Results may vary under different conditions depending on precipitation, geographic location, agronomic practices and crop prices for any given year.

“Overall, our analysis does show that a diversified crop rotation was more profitable, and particularly for crops with a high price premium. Although we expected low tillage to be more profitable, our results showed that, under the conditions of the trial, the high tillage intensity was more profitable. However, higher tillage can come at a cost of soil health and loss of moisture, making lower intensity tillage, good weed management practices and possibly strategic tillage important for sustainable organic crop production.”