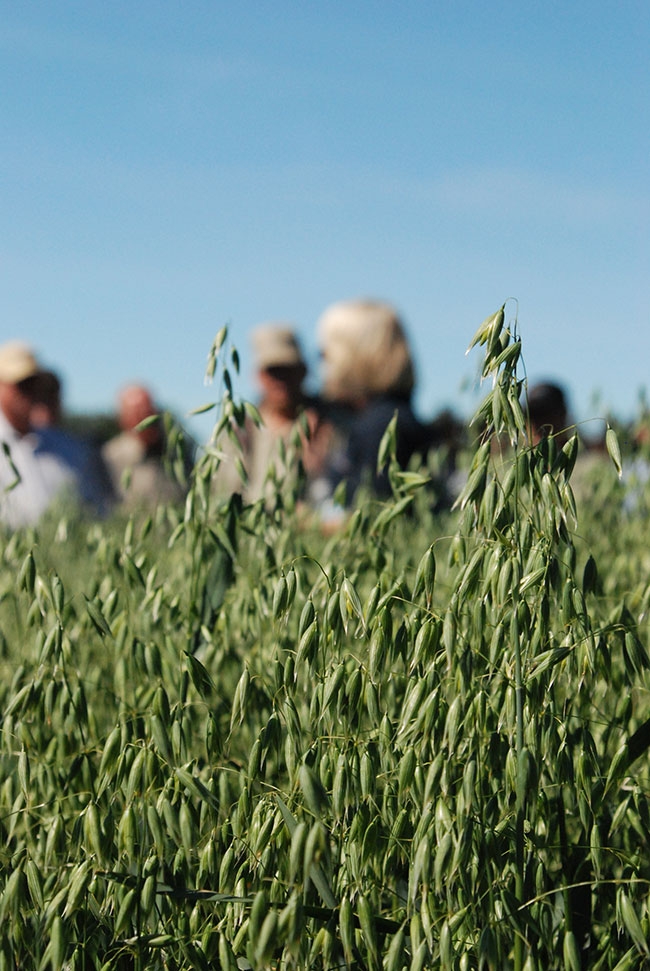 “We thought that involving organic farmers would be good for everyone. The organic environment is so different than conventional, and even varies between organic farms,” Entz says.

In the participatory plant breeding (PPB) pilot project, early generation (F3 or 3rd generation) wheat populations from the organic wheat breeding program at AAFC were distributed to eight farmers located in Manitoba in 2011. Each farmer chose three wheat populations and was provided with 5,000 seeds of each line. During the growing season, selections were made based on each farmer’s preference, and 300 spikes per population were selected at harvest for seeding the following spring. The process was repeated in 2012 and 2013, when the F6 generation was provided to the University of Manitoba (U of M), which then compared the F6 generation to conventionally selected check varieties in 2014.

Entz says that the farmers selected for different characteristics based on their preferences and environment. One farmer selected for awned lines. Another selected for no awns.  There were also large differences in height selection between farms.

“We learned a lot in the pilot project. The farmers selected very different looking crops over three years,” Entz says.

When compared to conventional varieties under organic production in 2014 at the U of M, the farmer-selected organic lines had significantly higher early season vigour, were taller and took longer to mature. The farmer-selected lines also yielded significantly higher than conventionally selected checks – on average about three bushels per acre higher.

“There are some conventional wheat varieties that do well under organic production, but our idea is to involve farmers early in the selection process to help select for lines that perform well under organic conditions,” Entz says.

Organic selections under organic conditions perform better
The results at the U of M align with research done by wheat plant breeder Dean Spaner at the University of Alberta (U of A) over the past 15 years. In several studies since 2001, the conclusions were that for organic production, wheat lines should be selected under organic conditions. For example, one study compared 79 F6 lines in conventional and organic plots at 12 sites over three years. The top two yielding lines in conventional production only ranked 53rd and 21st under organic production.

“Organic production is a different environment than conventional. It only makes sense to select under the environment where the cultivar is going to be grown,” Spaner says.

The U of A research reached similar conclusions as the farmer selection process at the U of M. To be competitive with weeds, selection should focus on taller plants, faster early season growth and more tillering.

Since the U of M pilot project, the PPB program is entering its 8th year in 2018 and now includes organic oat and potato farmers as well. Seventy farmers across Canada are participating, including 15 potato farmers. The program is set up so that if a farmer-selected line from AAFC is advanced by the plant breeder to registration, the farmer receives 11 per cent of the royalties. In New Brunswick, the PPB project has resulted in two farmer-selected potato varieties advancing in the AAFC plant breeding program, and with agreements signed, the farmers will share in the royalties in the future.

In Western Canada, Entz is hoping more plant breeders will become involved in the PPB program. In the summer of 2017, Entz gave tours through the PPB plots to create greater awareness of the program.

One plant breeder who is already working with the program is Jennifer Mitchell Fetch, AAFC’s oat breeder at Brandon, Man. She conducts both organic and conventional oat breeding programs, and has previously registered oat varieties developed completely under organic selection, quite often at the U of M organically managed locations. AAC Oravena was registered in 2013 and OT8006 was supported for registration in 2017. She hopes to build on her organic plant-breeding program with the PPB program.

“Each organic farmer has their own environment. They treat their land differently and we thought it would be really interesting to see how different oat breeding populations performed under a wide range of organic conditions,” Mitchell Fetch says.

Under the PPB program that Mitchell Fetch is involved with, organic oat farmers conducted three years of selections. Subsequently, in 2017 the organic farmer-selected F6 oat lines were tested at the U of M Carman organic location. The results are still being compiled. If any of the PPB oat lines look promising, Mitchell Fetch can help bring them to registration through the organic oat breeding program.

Entz says the PPB program could also provide a benefit to farmers – organic or conventional – for niche crops that do not receive the same resources for variety development.

“Breeders are doing a really good job in the major crops like canola, wheat and barley.  The niche crops, like organics, or buckwheat or even hemp could benefit from PPB programs. There’s a project at Washington State working on farmers selecting quinoa,” Entz says. “Getting farmers involved is cost-effective and can help improve the selection process.”