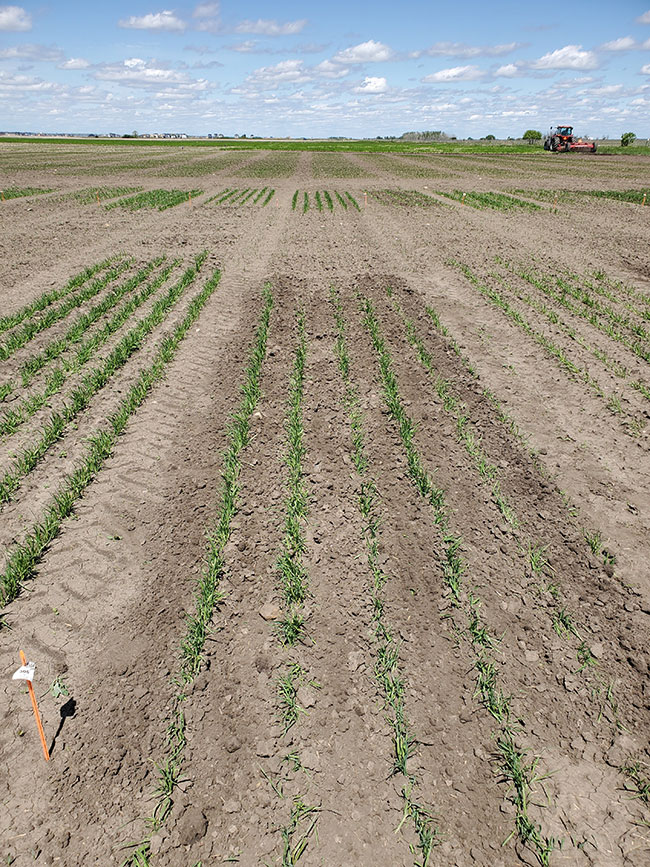 A Saskatchewan organic oat production project includes a weed control study with such treatments as rotary hoeing, which was used on this plot.Photos courtesy of Racquelle Peters.

“On the Prairies, oat is one of the real cash crops for organic farmers. There is a strong demand for organic oats for products like energy bars, and farmers make money growing them,” says Steve Shirtliffe, a professor of plant sciences at the University of Saskatchewan.

Now he is leading a project that is pointing the way to even better practices for organic milling oat production.

This project builds on previous studies by Shirtliffe and his research group. “Years ago, we did some work on weed control in organic oats with Dilshan Benaragama [now a post-doctoral researcher who was working on his master’s degree at that time]. We were able to get fairly good weed control [by using a higher seeding rate, harrowing and a more competitive cultivar],” Shirtliffe explains. “However, despite the improved weed control, our yields were often around 70 bushels an acre, which for oat isn’t great.”

Over the years since then, Shirtliffe’s group made a lot of progress on organic weed control, especially with mechanical control options, but they hadn’t yet tried those new options in oat crops. Plus, based on some of their other research, they suspected that the relatively low oat yields were likely due to low soil fertility levels, especially low phosphorus levels, that tend to occur in organic cropping systems on the Prairies.

He says, “With our current project, we have an opportunity to put those pieces together, and do some applied research that will help organic growers get better yields from a crop that makes them money, that is good for their farm and the environment.”

The project includes 1) a weed control study, 2) a nutrient management study, and 3) a study that combines the optimum practices from the first two studies. It is funded by Agriculture and Agri-Food Canada and the Western Grains Research Foundation under the Canadian Agricultural Partnership’s Organic Science Cluster.

More effective weed control
“For the first study, we are evaluating various cultural and mechanical weed control practices to determine how successful they are at suppressing weed growth as well as their effects on oat yield,” says Racquelle Peters, a graduate student working on the project. The field experiments are taking place at the University’s Kernen Crop Research Farm in Saskatoon from 2019 to 2021.

One set of treatments is comparing seeding rates of 250 versus 500 seeds per square metre. Since the early 2000s, Shirtliffe’s group has been advocating the use of higher plant populations to make the oat crop more competitive with weeds. This study’s comparison will help identify the optimal seeding rate where the crop outcompetes the weeds but doesn’t compete excessively with itself.

The study’s mechanical treatments include rotary hoeing, inter-row cultivation and a combination of the two. Shirtliffe’s group has had good success with these tools in pulse crops, and they want to see how well they work in a cereal crop like oat.

“Rotary hoes will control small-seeded, shallowly emerging weeds; those are the most problematic weeds for most organic farmers, based on the surveys we have done,” Shirtliffe notes. “However, rotary hoes only control these weeds when the weeds are just emerging. The optimum stage for control is what people call the white thread stage – when you scrape the soil away from the surface and you see what looks like a lot of white threads. At that stage, the rotary hoe’s tines can flick the weeds out of the ground, whereas if you wait until later the roots will more firmly anchor the weeds. So that timing is critical.”

A rotary hoe can control weeds within the crop row as well as between the rows, but it may damage the crop if the timing isn’t right. Peters says, “Rotary hoeing can be used when the crop is between the 2- and 4-leaf stage; the crop is able to bounce back from damage a little better when it is in that young stage. But getting the right timing when the weeds are still small enough but the crop is just big enough is tricky; it can be a matter of a day.”

Because of the tricky timing, a rotary hoe doesn’t always work well every year. That is one of the reasons why Shirtliffe’s group suggests that organic growers have more than one tool for weed control.

Inter-row tillage, which targets weeds between the rows, is done when the crop is a slightly older but while the weeds are still fairly small. “The crop has to be big enough that either a camera-guided system or you as a human with a manually controlled system can see the row, so the soil cultivated between the rows isn’t going to cover up the crop plants. For cereals, the crop should probably be at least at the three- or four-leaf stage,” Shirtliffe explains.

He adds, “With the our manually steered inter-row cultivator, we use 12-inch rows, but some producers go as narrow as seven- or eight-inch rows with their camera-guided systems.”

Some of the study’s treatments are producing really good weed control, especially the combination of rotary hoeing plus inter-row cultivation.

“In fact, some of our plots in 2020 had no weed biomass. Using these two implements with good timing – and some luck [with the weather] – we’re able to have relatively consistent organic weed control that approaches the levels in conventional production systems,” Shirtliffe says.

He notes that this study’s findings may also be of interest to conventional growers. “Some of the most problematic weeds in oats can’t be controlled with herbicides; for instance, there is no herbicide to control wild oats and green foxtail in conventional oats. So some conventional growers might want to pick up on our findings, although there is some resistance to doing a little bit of tillage and to buying specialized weed control equipment.” 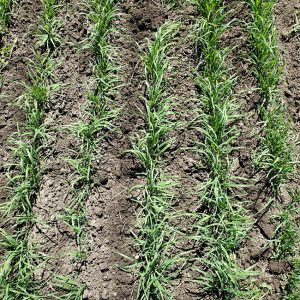 This plot was treated with an inter-row cultivator. 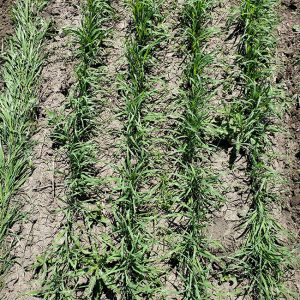 This check plot had no weed control.

Nutrient strategies for great yields
The nutrient management study is assessing green manures and animal manures as ways to improve nitrogen and phosphorus availability to organic oats. Two of these two-year field experiments finished in 2020, one at Kernen, and the other at the University’s Goodale Research and Teaching Farm near Saskatoon. The third experiment, which is at Kernen, will finish in 2021.

“The first factor we are looking at is four different crops prior to oats,” Peters explains. In one treatment, faba bean, a nitrogen-fixing legume, is incorporated into the soil after the beans are harvested. In the second, faba bean is not harvested but plowed down at the flat pod stage. Harvesting the grain gives the grower income from the plowdown crop, but reduces the amount of nutrients returned to the soil in the plowdown. The third treatment is a wheat crop that is incorporated after the grain is harvested. The fourth is fallow. She notes, “Fallow was picked as the previous crop control treatment due to its short-term ability to mineralize existing organic matter and supply nutrients to the following crop. Many organic farmers still use this practice in their rotation; however, overuse can lead to soil degradation.”

Each of the green manure plowdown treatments is paired with an animal manure application, to try to add both nitrogen and phosphorus to the soil. The study is comparing two locally available animal manures: composted cattle manure purchased from a local garden store, and raw laying hen manure from the university’s poultry farm.

Shirtliffe and Peters are really pleased with the nutrient study’s results so far. “We have been able to reach yields up to 150 bushels an acre for some of the treatments, which is very exciting,” Peters says.

Shirtliffe adds, “The amendments that add phosphorus seem to be helping a lot.” The best yields are from chicken manure plus faba bean green manure.

Cadillac combo, plus new options
The third study will consist of the best-performing treatments from the first two studies. “We will be putting together treatments that are almost weed-free and nutrient treatments with yields that even a conventional oat grower would be happy with,” Shirtliffe says.

Peters adds, “We hope to find the Cadillac combination of weed control and crop fertility management that improves the quality and yields of organic oats.”

This study will start in 2022 and run for two years. Along with validating the results from first two studies, it will also include a few new treatments so Shirtliffe’s group can begin looking at how these new options might help to further optimize organic oat production.

These new options will likely include different nutrient products. Shirtliffe explains, “The vast majority of organic farms in Saskatchewan don’t have animals. And many don’t have a nearby manure source and of course manure transportation costs are high. So we are going to evaluate pelletized chicken manure, which is used in organic cropping systems in many areas of the U.S. And we might also experiment with struvite [magnesium ammonium phosphate, recovered from municipal wastewater].”

Overall, Shirtliffe and Peters are excited by the project’s results so far. Shirtliffe says, “We think there is a real potential for organic oat growers to start making even more money.”