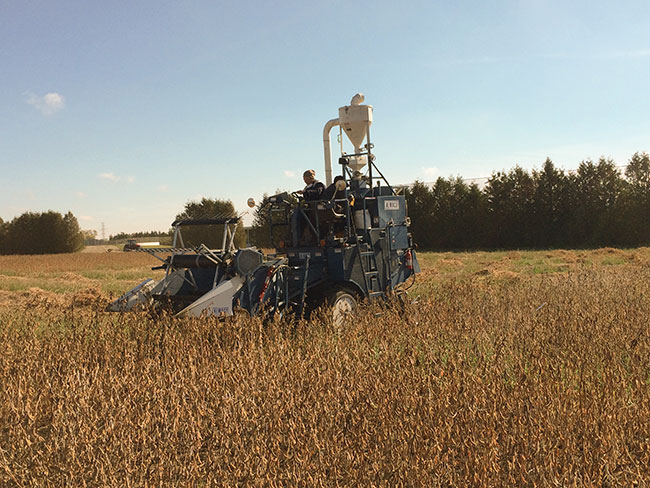 A new research initiative at the University of Guelph (U of G) in Ontario is aimed at producing new food grade, non-GM soybean varieties that are high yielding, disease resistant and possess improved food qualities sought out by end-users, such as increased protein content for soymilk and tofu products.

The $1.2 million initiative started in 2018 and is funded with federal dollars and by industry partners, including the Grain Growers of Ontario and Canadian certified seed supplier SeCan. The five-year project wraps up in 2023.

Istvan Rajcan, a professor at the U of G, is leading the research team. He says the Grain Farmers of Ontario encouraged the university’s breeding program to take on this project due to its excellent track record in releasing promising new soybean varieties for the Canadian market.

“Our breeding program is dynamic and keeps churning out new cultivars,” Rajcan says. “Every year we develop and release between three and five new cultivars.” 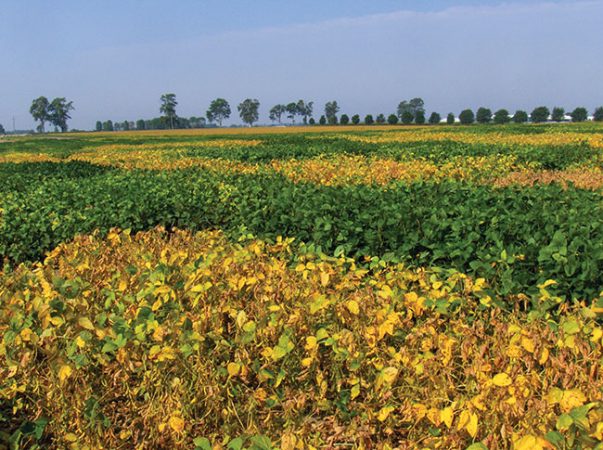 Soybeans at different states of maturity at the Woodstock Research Station in Woodstock, Ont. Soybean maturity is one of the selection targets for soybean breeders at the University of Guelph.  Photo courtesy of Robert Bruce.

The new cultivars produced under the current program will be tailored for short- and medium-season soybean growing areas of Canada, namely Ontario, Quebec and southern Manitoba.

Rajcan notes that the focus is on food-grade, non-genetically modified (GM) varieties because of the sizeable number of acres being grown to food-grade soybeans in Eastern Canada.

“Unlike in the U.S., where much of the main growing area is grown to GM soybeans, a significant portion of soybeans grown in Canada are of the non-GM, food-grade variety,” he says. “In Canada, primarily in the provinces of Quebec and Ontario, between 25 and 30 per cent of the total acreage of soybeans every year is non-GM food grade.”

The U of G researchers are utilizing conventional breeding methods, such as single seed descent, as well as genomic techniques and molecular tools, such as marker-assisted selection techniques, to develop the new cultivars.

One of their primary objectives is enhancing yield, and this is being done by incorporating alleles, which are versions of a gene, from elite, commercially successful cultivars from Canada and the United States as well as China, the centre of origin and diversity of soybean. The result, Rajcan says, is a bigger and more diverse gene pool that the breeders have to work with, especially due to the vastly underutilized Chinese germplasm.

“If we keep making crosses using all elite, high-yielding parents from Canada, over time, you may end up crossing similar with similar. The essence of success in plant breeding, however, is genetic variation,” Rajcan says.

“To prevent that, you’re always looking out for new alleles that would increase yield by five or 10 per cent or whatever amount that may be, which are currently not present in the Canadian gene pool.

“We are using genomic selection to select among populations for traits such as high yield using a large number of markers,” he says “That helps us make selections and cull individuals out of the populations that don’t have a chance of producing high yield. So, it helps us make the program more efficient.”

The U of G breeders are also aiming to develop output traits that enhance the value and market opportunities for soybean food items. For products like tofu, soymilk and miso, for example, this means adjusting properties like sucrose and protein content and boosting levels of substances like soyasaponin and isoflavones that provide health benefits. 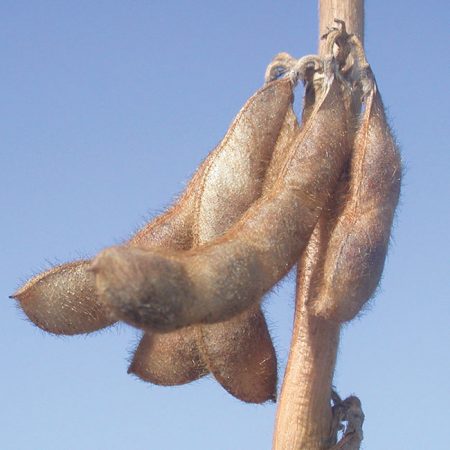 Cluster of soybean pods with up to four seeds, one of the selection targets for soybean breeders at the University of Guelph. Photo courtesy of Istvan Rajcan.

“For tofu, a higher percentage of protein and larger seed is preferred, so we are making selections within our breeding populations for new cultivars that have those characteristics,” Rajcan says. “For soy milk, the preference is for higher than average protein and high sucrose to make it a bit sweeter. The high sucrose is also important for miso producers in Japan.”

“For tofu, a higher percentage of protein and larger seed is preferred, so we are making selections within our breeding populations for new cultivars that have those characteristics,” Rajcan says.

Enhancing genetic resistance to soybean cyst nematode (SCN) and white mould is another key goal for the U of G breeding team.

Rajcan says SCN is most damaging disease of soybeans in worldwide and is now present in a large part of Ontario. He adds that SCN is a growing problem in southern Quebec as well.

“We don’t really have a choice whether to work on SCN resistance or not,” Rajcan says. “Many times, we are not even able to actually find a commercial seed partner to release the cultivars to unless the cultivar has a resistance in it.”

Rajcan says his team is utilizing new sources of resistance beyond the common source of resistance – the PI 88788 gene – that most soybean breeders across North America have been using. The U of G researchers are using a different SCN resistance source, PI 437654, to diversify the genetic resistance to SCN.

According to Rajcan, the program is also targeting white mould because the pathogen – the third most damaging disease of soybean behind SCN and Phytophthora root rot – is on the rise in Ontario and Quebec.

He notes that unlocking the key to white mould resistance has been challenging for soybean breeders.

“It’s been an elusive disease to work on because there is no such thing as complete resistance to white mould. There’s only partial resistance,” Rajcan says. “When a cultivar has partial resistance, it is a result of many genes instead of just one or two major genes, so that creates difficulty in developing new soybean cultivars that are resistant to white mold.”

Rajcan points out that not all the varieties released through his program will share the same traits.

“Most of the cultivars that we are developing are high yielding, but not all of them will have these same characteristics,” he says. “There will be cultivars with a package of traits that is good for certain final products and there are other varieties that would be good for different food grade uses but also including industrial bioproducts.”