The 2015 drought in Alberta and Saskatchewan is part of a thousand-year history of recurring Prairie droughts. That history includes multi-year and even multi-decade droughts. If you overlay that difficult past with a warmer and possibly drier future, what might that mean for Prairie agriculture?

“Looking at the zone on the Prairies where most of the field crops are grown, the 2015 winter-spring is by far the driest in the past 68 years,” David Phillips, senior climatologist with Environment Canada, says. For the Prairie region, good quality weather records only go back 68 years, although records for the major Prairie cities start in the late 1800s. “Although parts of Manitoba had more precipitation than normal in 2015, parts of western Saskatchewan and Alberta were exceedingly bone dry.”

Trevor Hadwen, agroclimate specialist with Agriculture and Agri-Food Canada, highlights some of the agricultural impacts of the 2015 drought in Alberta and Saskatchewan. “Early on, people were having to reseed crops because of poor emergence. Then it was just too dry for crops to emerge from the soil. So a lot of crops were later seeded, and by the time they got moisture, they were very late into the season and people were concerned that frost would be an issue in the fall.

“Another impact starting very early in the spring was that pasture and forage production was very poor. Very dry and delayed productivity of grasslands developed throughout Saskatchewan and Alberta, and there was a lot of concern for feed availability.”

Hadwen says the late July rains saved the crops in Saskatchewan and parts of Alberta, but other areas in Alberta continued to suffer drought conditions. “By the end of the summer, Saskatchewan was above average for rainfall despite the extremely dry spring. In Alberta, the drought areas really started to concentrate around the Edmonton region, and in some portions of the south. In southern Alberta, rainfall shortages were made up by some irrigation in the spring, helping those areas very significantly. So the main areas of impact for drought overall this summer ended up being in the Edmonton and northern Alberta regions.” By the end of October, significant drought conditions still persisted in central and northern Alberta.

Phillips notes the 2015 growing conditions could have been even worse. “The summer of 2015 was about the tenth warmest, but thank goodness it wasn’t any warmer than that because there would clearly have been more drought issues. The other thing that saved some growers, particularly in Saskatchewan, was that 2014 had been very wet, so the crops [in the spring of 2015] were probably sucking off that moisture from 2014.”

Past trends, future possibilities
Prairie droughts are definitely not a new phenomenon – just ask Dave Sauchyn from the University of Regina. He has been studying past climate trends on the Prairies by measuring the widths of annual growth rings in trees.

“We’ve been collecting dead wood for 25 years now; we have more than 8000 pieces. In order to grow, trees need light, heat, soil and water, and they have plenty of all of those in summertime except water. So, the pattern of tree growth tells us very much about the amount of water available every year for the last thousand years,” Sauchyn explains.

“We’ve found droughts that were much more severe and much more prolonged than anything we’ve seen on the Prairies in the last 120 years, including the 1930s. For example, just before Europeans came to the Canadian Prairies, there were droughts of 10 or 20 years in duration.”

Sauchyn’s research shows that, over the past 1000 years, the Prairie climate has included many droughts that have lasted a decade or longer.

He adds, “Based on the science, it is entirely possible that we could see prolonged drought some time in this century.”

In the coming decades, the Prairies are likely to continue getting warmer. “The most consistent scenarios show increasing temperatures, so a continuation of the trend observed over the last half century. And much of the warming is occurring in the winter, so the Prairies and most of Canada are getting less cold. Minimum temperatures – the temperatures at night and in winter – are rising,” Sauchyn explains.

Predictions relating to Prairie moisture conditions are more complex. “One trend is more precipitation, especially in winter, because as the temperature of the air increases, it can hold more moisture. Also, the source of our moisture is the oceans, and the oceans are getting warmer, so they are producing more water vapour,” Sauchyn says. Warmer, wetter weather sounds promising for Prairie crop production. However, the models also indicate the extra water may not necessarily arrive in ways that are best for crop production. Some of the extra water may arrive as winter rains, when crops aren’t growing, and the range of moisture conditions will likely be much larger, swinging between extremely wet and extremely dry conditions.

So the predictions present a mix of advantages and disadvantages for Prairie crop production, including opportunities to grow higher value crops that require a longer growing season, increased risks of drought stress, heat stress and waterlogging, and changes in disease, insect and weed issues as these organisms adapt to their changing environment.

“I think it is a matter of adapting, doing things differently, storing precipitation, using creative ways to do more with the precipitation you get, and trying to adapt your planting decisions to cushion the blow,” Phillips says. “By preparing for the changing weather and responding to it, we can mitigate the effects of it or capitalize on it. I think we have to be climate smart, weather smart, in what we do – try new things and be resilient enough to change according to how things are going.”

Overall, Phillips is optimistic about the future for Canadian crop production in the face of climate change. “There are many challenges today for growers, but incredible advances have been made. And I think better science will help deal with some of the challenges ahead. Also, I think we’re in better shape in Canada than in many other countries to be able to weather the storm, so to speak, of a warming climate. I think growers are willing to try new things, and with a changing climate, that will be one of our strengths. The inventiveness, adaptability and resiliency of growers make me think the future is bright.”

Sauchyn has been studying adaptation and vulnerability to drought on the Prairies in recent years. He says, “Adaptation is nothing new to Prairie farmers. The Prairies have one of the more inhospitable climates in the world – throughout the history of Prairie agriculture, farmers have had to adapt to a climate that is colder and drier and has a much shorter growing season. They just have to keep adapting because the climate keeps changing like a moving target.” 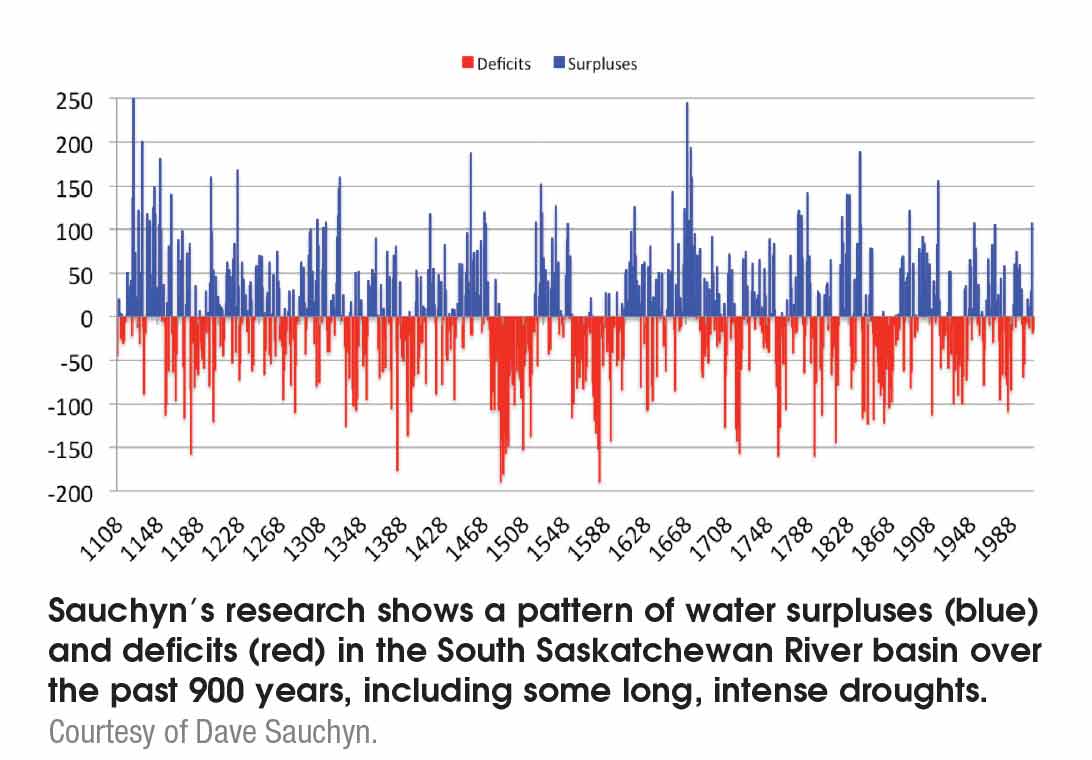 ARE THE PRAIRIES GETTING STORMIER?
Although news and social media stories may give the impression that Prairie weather is getting stormier, the jury is still out on the actual trends. That’s mainly because Prairie records aren’t long enough to establish firm trends.

John Hanesiak, a University of Manitoba scientist who studies storms and atmospheric processes, explains that at least 30 years of good records are needed to start examining weather trends and the records for Prairie storms are just getting to that length.

“For tornadoes, our record is really good from about 1985 onwards. For heavy rains, hail, damaging windstorms and things like that, our record is not quite as good because people generally don’t report those events as well. A storm event could be quite local and Environment Canada may not necessarily know how bad it was. Also, sometimes there isn’t the ability for someone to go and verify that the storm event was severe.”

Another complication is that reporting biases can muddy the trends. “There is ‘population bias’: you get better reporting from areas with a lot of people than from places where there aren’t many people. [So as the population grows in a region, you get more reports.] And people are more prone to report these events nowadays than they used to be – people have cameras all the time, whereas even 10 years ago that wasn’t the case,” Hanesiak notes. He adds there are statistical methods to try to account for those biases, “but we don’t really know how good they are.”

Hanesiak summarizes the current situation for Prairie storm events: “For tornadoes, usually we see between 40 and 45 per year on the Prairies, based on a 30-year average; Manitoba gets about 10, and Alberta and Saskatchewan get about 15 or 20 each per year. There are usually about 30 strong wind events and about 15 heavy rain events per year. And there are about 60 hail events per year; most of those are in Alberta because of the proximity to the mountains.”

Some of Hanesiak’s research involves figuring out future trends in severe storm events. “One of the problems that has been plaguing us for the last while is that climate models are usually needed to do long-range projections and the climate models have spatial scales in the order of 120 to 200 kilometres. But we need to get down to 10 kilometres or less to resolve the detail that is needed for convective summer storms.”

Fortunately, regional climate models have recently been developed that have scales down to about 30 or 40 kilometres. So they can capture more details of the jet stream patterns and moisture patterns in the atmosphere than the climate models can. Hanesiak says, “We know that more moisture and stronger winds in the upper parts of the atmosphere are important for producing severe weather. So we can look at those kinds of things and see how they have changed, and try to tease out what we might expect in the future.”

Hanesiak’s research group is currently using this approach to run a hail model. The researchers are just starting to analyze the data from this work, but their initial findings are intriguing. “It looks like we might expect to see fewer hail days in the future on the Prairies, but when they do happen they will tend to have more larger hail, so they’ll have more damage potential,” Hanesiak says.

“Also, there seems to be a seasonal shift. At present, [in the southern Prairies] we tend to see most of our hail and severe weather around the June-July time period. But that seems to be potentially shifting by mid-century toward the April-May time period, with less hail in July-August. The northern Prairies and the Northwest Territories don’t see that many hail events now, but in the future it looks like their June-July-August period will be quite changed, with more frequent and more severe hail events.”

Hanesiak’s research group is planning to do more of this type of research. For instance, next year, one of Hanesiak’s graduate students will be using the same approach to look into future trends in Prairie tornado events. 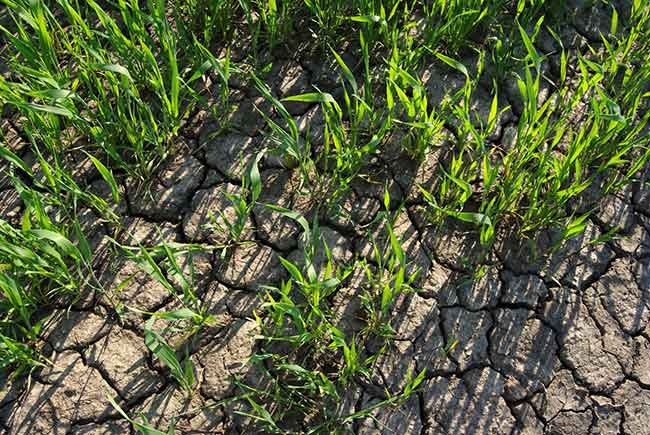 Prairie droughts are definitely not a new phenomenon. The 2015 drought in Alberta and Saskatchewan is part of a thousand-year history of recurring Prairie droughts.


Related
The past, present and future of Canadian agriculture
Drought’s damage provides a case study for future farm programs
Future drought will offset benefits of higher CO2 on soybean yields
Field crop disease management in Canada part one: What the past can tell us