After 2015’s low rainfall across a wide swath of the Prairies, crop damage from herbicide carryover loomed in the minds of those who were around in the early 2000s when crop damage was widespread. That’s unlikely to happen again, says the “Yogi Berra” of herbicide carryover, weed scientist Eric Johnson with the University of Saskatchewan.

“Based on what we know of herbicide carryover and the rainfall that we received in the summer of 2015, I would say the risk is moderate to low,” Johnson says. “The herbicide labels are reasonably good for recropping. Just follow them and you should keep the risk to a minimum.”

Johnson was around in the early 2000s, when dry weather in 2000, 2001 and 2002 meant herbicide carryover caused widespread crop damage to sensitive crops like pea and lentil. At that time, he was with Agriculture and Agri-Food Canada as a research scientist at Scott, Sask., where he conducted many studies on herbicide carryover.

The most important factors affecting herbicide breakdown are soil temperature, soil moisture, soil properties like clay, organic matter and pH, and the chemical structure of the herbicide.

“The critical period for microbial degradation of herbicides is July and August. Degradation during that period depends greatly on soil temperature and water,” Johnson explains.

He says soil temperature was fairly normal throughout the summer of 2015 with microbial activity likely close to what would be expected. Looking at precipitation in 2015, rainfall was much below normal up to June 1 across many parts of the Prairies. But the tap turned on in early July, and many areas of the Prairies ended up with normal to above normal precipitation by Oct. 5.

“By comparison, when we look at the worst years for carryover in 2000, 2001 and 2002, it was dry all summer and herbicide degradation was low,” Johnson notes. (See precipitation map below.)

Crash course in herbicide degradation
Herbicide characteristics partially explain the potential risk of herbicide carryover. The half-life of a herbicide is an important factor. The longer the half-life, the greater potential risk. While half-life is important, another key characteristic is whether the herbicide is bioavailable. Bioavailability is a measure of how available the active ingredient is for root uptake. For example, Reglone (diquat) has a long half-life of 1000 days in the soil, but has a very high sorption coefficient, meaning it is tightly bound to soil particles and not very bioactive. These characteristics provide clues to herbicide carryover, but other factors like soil texture, clay content, organic matter and pH are critical factors.

Soils high in clay content or organic matter bind herbicides more tightly, while coarse soils with low water holding capacity increase the bioavailability of the herbicide and increase the probability of carryover injury.

Johnson says a good example comes from 2003 when he observed clopyralid (Lontrel) damage on pea. The previous summer was hot and dry, but a spring rain moved the herbicide into the soil solution, where it was bioactively available to growing plants and damaged the pea seedlings.

“The worst conditions you can have is a dry summer and fall, and then a wet spring. The peas were doing fine until a
one inch rainfall came along in the spring,” Johnson says.

Imidazolinone herbicides like Pursuit, Odyssey and Solo have seemingly contradictory characteristics when it comes to pH. Adsorption increases with pH below 6.5, making them less available for microbial degradation and supposedly less bioavailable. However, at low pH, they also desorb more readily in soil solution increasing the risk of carryover damage. Conversely, on high pH soils, they are adsorbed more slowly, but held more tightly to soil particles. 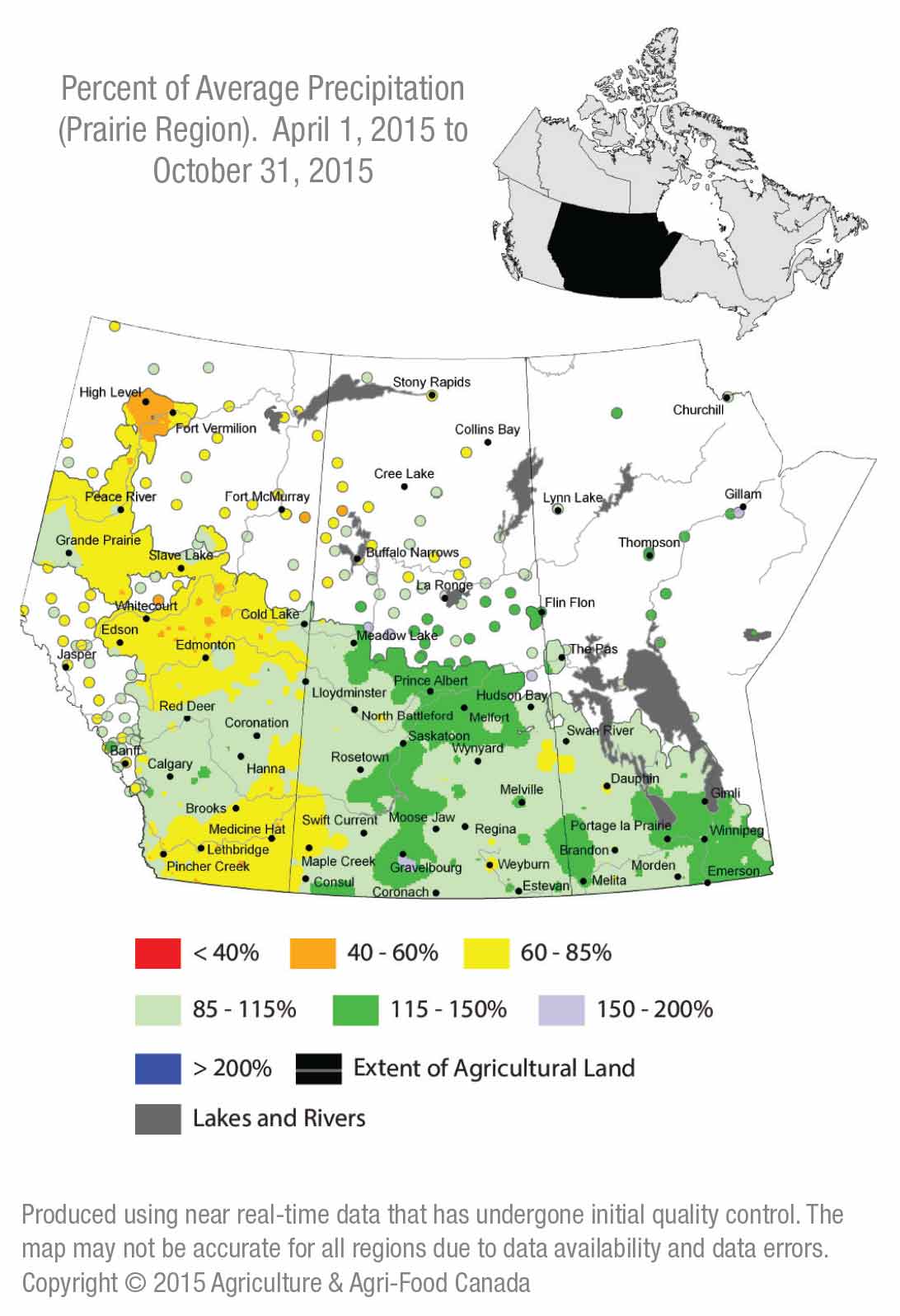 Carryover diagnostics
For agronomists and farmers concerned about carryover in 2016, Johnson says a soil bioassay can be helpful to predict potential for carryover; however, it is difficult to account for soil variability throughout a field. A bioassay indicating crop injury indicates the crop shouldn’t be planted, but a bioassay showing no injury does not mean you won’t see injury in non-sampled areas. Chemical analysis can provide an indication of herbicide presence in parts per million, but is not a reliable way to predict if carryover damage could occur.

When doing crop diagnostics to determine if a field has carryover damage, Johnson says the problems won’t be uniform over the entire field. Rather, areas with low clay content and low organic matter – such as hilltops – will be the first areas to show problems.

“Soil herbicide interactions are complex,” Johnson notes. “Organic matter is your friend. For 2016, follow recropping labels and the risk should be low.”

The Saskatchewan and Manitoba crop protection guides include charts cross-referencing re-cropping restrictions for residual herbicides between herbicide and crop to help make crop rotation choices easier. And in this case, you really should follow label directions.

ROOT BIOASSAYS FOR PREDICTING CROP INJURY
In the days of herbicide carryover during the dry 2000s, researchers and chemical companies investigated the use of root length soil bioassays to help predict the potential for crop damage from herbicide carryover. Anna Szmigielski and Jeff Schoenau with the University of Saskatchewan soil science department, and Eric Johnson, then with Agriculture and Agri-Food Canada, led many of the studies, which also investigated soil properties’ impacts on carryover. Paul Watson with the Alberta Research Council at Vegreville, Alta. also conducted soil bioassay research.

Two bioassays were developed and verified for use on Prairie soils. A mustard root-length soil bioassay was proven to be effective on Group 2 ALS-inhibitors. The test involved collecting 200 grams of soil and splitting the sample into four replicates. Soil was wetted to 100 per cent field-capacity water content, hand mixed, and gently packed into a two ounce Whirl-Pak bag that was approximately eight centimetres (cm) deep and one cm thick. Six oriental mustard seeds were planted approximately two millimetres (mm) deep in each bag. The soil surface was covered with a 0.5-cm layer of plastic beads to prevent soil drying. Plants were grown for three days at room temperature, and after two days, plants were watered to 100 per cent field capacity. At the end of three days, the bag was opened, soil washed away from the roots and the length of root was measured.

Another soil bioassay uses sugar beet as an indicator plant for sulfentrazone and pyroxasulfone. Soil is gently packed into a two ounce Whirl-Pak bag to form a layer approximately eight cm high, six cm long and one cm wide. Six sugar beet seeds are planted at a two mm depth and grown for six days. In this case, sugar beet shoot length was used as an indicator of herbicide presence compared to a similar soil free of herbicide residue.

Unfortunately, neither of these bioassays is commercially available to farmers. Alberta Research Council used to do bioassays, but the service has been discontinued. An invaluable resource for farmers and agrologists is a publication from Alberta Agriculture and Forestry (AAF), entitled How Herbicides Work. It includes descriptions of herbicide modes of action and photos of herbicide activity. The book is available through AAF on its website: AgDex 606-2, at a cost of $35.00.

And it bears repeating: always read and follow label directions. 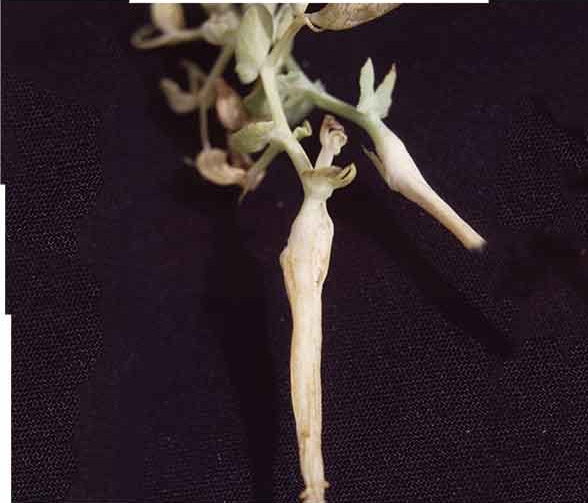 Clopyralid carryover suspected in the overproduction of undifferentiated (callus) tissues in the lower stem/upper root to the point where the stem splits. After 2015’s low rainfall across a wide swath of the Prairies