Features Agronomy Inoculants Soybeans
Do you need to inoculate your soybeans every year?

Evaluating the persistence of soybean rhizobia in Manitoba soils. 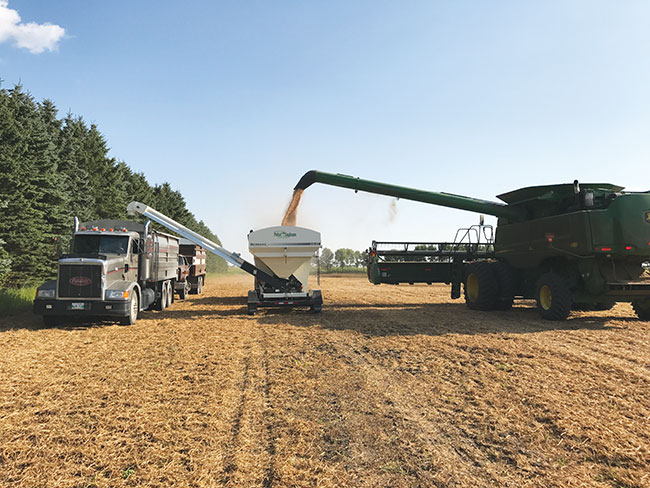 On-farm trials are helping to establish the best practices for soybean inoculation in Manitoba. PHOTO COURTESY OF THE MANITOBA PULSE AND SOYBEAN GROWERS ON-FARM NETWORK.

“In many traditional soybean-growing areas, rhizobial inoculant is not used every year,” says Ivan Oresnik, a professor of microbiology at the University of Manitoba. Does that mean that Manitoba soybean growers could sometimes skip inoculating their crop with nitrogen-fixing bacteria? Research led by Oresnik, plus on-farm studies, are helping to answer that question.

Bradyrhizobium japonicum (B. japonicum) bacteria are used in commercial soybean inoculants. These bacteria form a symbiotic relationship with a soybean plant, forming nodules on the plant’s roots and converting nitrogen from the air into nitrogen compounds that the plant can use. B. japonicum can also exist in the soil as free-living bacteria, without having a relationship with a plant.

Oresnik and his research group have been working on B. japonicum studies since 2008, mainly with funding from the Manitoba Pulse & Soybean Growers (MPSG). Back in 2008, soybean production was just starting to take off in Manitoba, and people were still wondering how well B. japonicum would survive the cold Prairie winters because the bacteria are not native to Western Canada.

One of Oresnik’s MPSG projects, which started in 2010, involved developing a PCR test to rapidly count the population of B. japonicum in soil samples – a helpful tool for getting a better handle on how long these bacteria persist in the soil. Over the next few years, Oresnik and his group developed and fine-tuned this quantitative PCR (qPCR) test.

Then starting in 2016, they partnered with an agricultural consulting company to see if their qPCR test could be used to predict when a soil’s B. japonicum population was high enough that the next soybean crop would not need to be inoculated. In this two-year project, they compared inoculated and non-inoculated soybean crops in fields with an established soybean history at several Manitoba locations.

“The long and the short of that study was that Bradyrhizobium japonicum was everywhere [in all of the study fields],” he says. Whether or not a commercial inoculant was applied, all the soybean crops had sufficient nodulation for successful nitrogen fixation.

Crop rotation and rhizobial persistence
Most recently, Oresnik and his group have been examining if and how the crop rotation influences the level of B. japonicum persisting in a field.

“Plants engineer the soil microbial community around their roots by the different compounds their roots exude into the soil. Different plant species have different tastes, if you want to think of it that way, so their exudates attract different types of microbes,” he explains.

So, the persistence of B. japonicum is likely influenced by the crop rotation’s effects on the microbial community and whether this community’s diverse interactions help or hinder the survival of B. japonicum.

As part of this MPSG-funded study, Oresnik and his group are also examining whether some portion of the B. japonicum population in a field might lose their nitrogen-fixing capacity over time. He explains that the group of symbiosis genes that enable B. japonicum to form root nodules and fix nitrogen occur together in a large genetic package, called a symbiosis island.

This symbiosis island is detachable from the bacterium’s genome. “Research in other regions shows you can get genetic transfer events where the symbiotic island will move to a closely related species,” he notes. Manitoba soils have native bradyrhizobial species that could potentially take up B. japonicum’s symbiosis island and integrate that island into their own genomes.

“However, just because the symbiosis island has moved to another bacterial species doesn’t mean that those genes will work efficiently in that other species. Sometimes you start getting bacteria that can nodulate and fix nitrogen with your crop, but they are not efficient at this and they are not the species in your commercial inoculant. We don’t have that problem here yet, and I don’t know if it will happen here.”

Oresnik piggybacked his study on a pre-existing soybean rotational project led by the University of Manitoba’s Yvonne Lawley. Her project started in 2013 and the rotations include: continuous soybean; corn-soybean; canola-soybean; and wheat-canola-corn-soybean.

The fieldwork took place in Carman, Melita and St. Adolphe in 2017, when all the plots were in the soybean phase of their rotations. Oresnik’s group collected soil samples before seeding, at emergence, at pod development and at full maturity. Also, for comparison, they obtained soil samples that had been archived when Lawley’s project started in 2013.

Oresnik’s group extracted DNA from the soil samples. Then they used their qPCR test to quantify the B. japonicum population and they used a different PCR test to look for one of the bacterium’s nodulation genes to see whether the B. japonicum bacteria still had their symbiosis islands. The DNA samples were also analyzed to characterize the rest of the soil bacterial community.

Oresnik and his group are currently wrapping up their work on the study’s first two objectives. Their results confirm their previous finding that B. japonicum has now become an established part of most Manitoba fields where soybean crops have been grown more than one or two times. 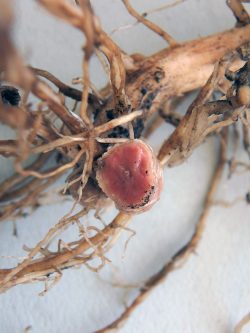 If soybean rhizobial nodules are reddish pink inside, then they are healthy. Photo courtesy of Cassandra Tkachuk, Manitoba Pulse & Soybean Growers. 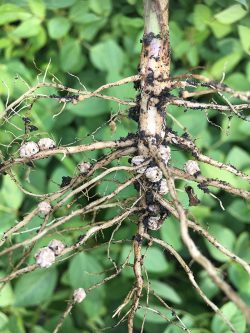 A University of Manitoba study is examining how crop rotation influences the persistence of soybean rhizobia in a field. Photo courtesy of Cassandra Tkachuk.

Their findings also show that B. japonicum survives the winter but its population declines over the years in a predictable way. “Based on these decay curves, you could predict how much of the bacterium’s population will remain if you last grew soybean the previous year, two years ago, three years ago, or four years ago,” he says.

These decay curves varied somewhat from field to field. The population decline was steepest for the Melita location, which had never had a soybean crop before Lawley’s rotation project started. The other two sites already had a history of soybean production before her project.

The results also show that the crop rotation influences the B. japonicum numbers: the population was highest in the continuous soybean plots and lowest in the canola-soybean plots. However, the rotation did not significantly affect soybean yields.

Oresnik and his group are currently analyzing the very complex bacterial community data. He says, “You might have something like 10,000 species of bacteria in a gram of soil. A single bacterial species doesn’t define what will happen; it’s really the village effect [with many different interactions affecting different functions].” He notes that the soil bacterial community is important for all crop types because the bacteria drive the nutrient cycles in the soil.

His advice to growers is to follow MPSG’s recommendations for soybean inoculation.

Studies and recommendations
MPSG has been working on a number of studies that are helping to nail down the best practices for soybean inoculation in Manitoba.

In an MPSG plot study in Melita, Carberry, Carman, Roblin and Beausejour from 2014 to 2016, 14 inoculant treatments were compared, including different inoculant products, formulations and rates, and a non-inoculated control. The study included fields that were new to soybeans and fields with a history of soybeans.

In both types of fields, the product, formulation and rate did not affect yields or nodulation. The rate comparison was single versus double inoculation. A double inoculation involves using two formulations or placement techniques. For instance, a grower might use a liquid inoculant on the seed and a granular inoculant in-furrow as a way to ensure successful inoculation.

So, in this study, double inoculation did not provide an additional benefit. However, the study’s small plot conditions were very favourable for inoculum survival, which might not always be the case under field conditions.

“Our recommendation for fields with little or no history of soybeans is to double inoculate,” says Klippenstein. “That’s because there is no way to be sure exactly what the conditions are in the field for survival of the inoculum.”

She notes that MPSG has developed a checklist of four criteria that a field should meet before the grower shifts from double to single inoculation: the field has had at least two previous soybean crops; those crops nodulated well; the most recent soybean crop was grown within the past four years; and the field has had no significant flooding or drought conditions over that time.

In the single versus no inoculant study, soybeans did not get a yield boost from inoculation when grown in fields with a history of at least three well-nodulated soybean crops and where the most recent soybean crop was grown within the past four years. She says, “[None] of the 27 on-farm trials had a significant yield difference with inoculation.”

MPSG has not yet created a checklist for switching from single inoculation to no inoculation, but Klippenstein says they hope to develop that in the future.

“Similarly, if you’re currently single inoculating and you have had some really good soybean years with good nodulation and the environment has been favourable for rhizobia to continue living in the soil, then maybe it is a good time to single inoculate most of your field and leave a non-inoculated strip. Then you can dig up a few of those soybean roots and see what is going on.”

Klippenstein explains that MPSG encourages farmers or their agronomists to check the nodulation in all their soybean fields every year. The protocol for assessing soybean nodulation is available on the MPSG website. She summarizes, “You dig up a few of your soybean plants at the R1 stage (beginning bloom) and cut open the nodules. If the nodules are reddish pink inside, then they are healthy and fixing nitrogen. If you have at least 10 healthy nodules per plant by R1, then you are good to go for the rest of the season. If you don’t have 10 healthy nodules by R1, you likely won’t have enough nitrogen fixation later in the season. In that case, you may want to consider adding nitrogen fertilizer as a rescue treatment between the R2 (full bloom) and R3 (beginning pod).”

She adds, “Checking the nodulation in your soybean field not only helps you for the current growing season, but it also gives you information about where the field’s rhizobia populations are at, which can help inform your inoculation strategy for the years ahead.”