March 11, 2020
By Sponsored by Corteva Agriscience

Longer crop rotations and resistant hybrids can provide your best defence against the disease.

First detected in Alberta in 2003, clubroot is now found in canola fields across the Western Canadian prairies. Virulent new strains of the disease capable of overcoming resistance genes in canola hybrids have emerged in recent years, making clubroot even more difficult to manage.

One of the things that makes clubroot control in canola such a challenge is that a portion of the pathogen inoculum can survive up to 17 years in the soil. Recent studies, however, have shown the level of inoculum drops most quickly in the first two years and then declines gradually after that. 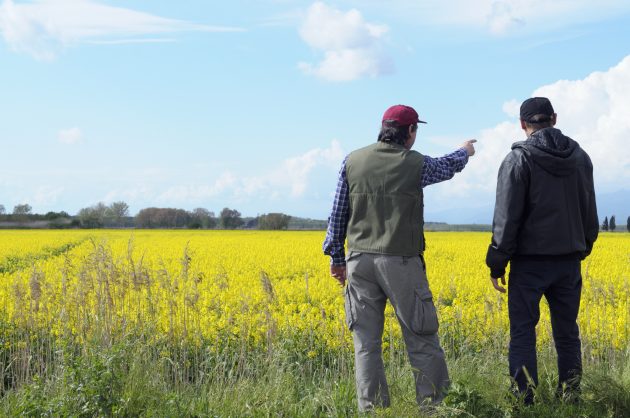 Gary Peng, a research scientist at Agriculture and Agri-Food Canada’s Saskatoon Research and Development Centre, says this is a big reason why crop rotation is such an important aspect of clubroot management.

Peng says farmers who take a break of at least two years between canola crops – especially in instances where there are high concentrations of the pathogen inoculum – can greatly reduce the clubroot spore load in their fields.

He adds that crop rotations of three years or more will also enhance the effectiveness of clubroot-resistant canola hybrids in warding off the disease.

“If you can reduce the inoculum levels by 90 per cent, the resistance performance of that hybrid will be both better and potentially be more persistent or durable,” Peng says.

“Preventing clubroot from establishing on your farm is the best strategy there is, because when you start with zero spores in your field, there’s zero selection pressure against any canola hybrids that you’re growing,” Stanton says.

“Once the disease is established in a field, you’re going to have a large population of spores in your field that will have diversity within it, and some of the rare pathotypes may be able to infect hybrids with clubroot resistance,” he adds.

“When there’s a three-year rotation or longer, more of the clubroot spores break down and there’s less selection pressure against the resistant hybrids.”

Since the first resistant hybrids were grown in clubroot-infested canola fields in the Edmonton area 11 years ago, resistance genes have proven to be an effective management tool.

The hybrids with the original source of clubroot resistance provided excellent control, but in recent years, numerous virulent pathotypes of the disease have emerged that can overcome the initial resistance genes. The seed industry has responded with the development of hybrids with new sources of resistance which specially target these new strains.

Peng believes that in most canola fields, especially in Saskatchewan and Manitoba, hybrids with the original source of clubroot resistance should still be effective for keeping the most common clubroot prototypes at bay.

“That would be the first step, but if you start seeing the erosion of that first-generation resistance, especially in certain areas of Alberta where new pathotypes have been reported commonly, you would want to deploy the second-generation resistant hybrids because of the added new genes, which can overcome many of the new pathotypes that erode the old resistance,” he says. 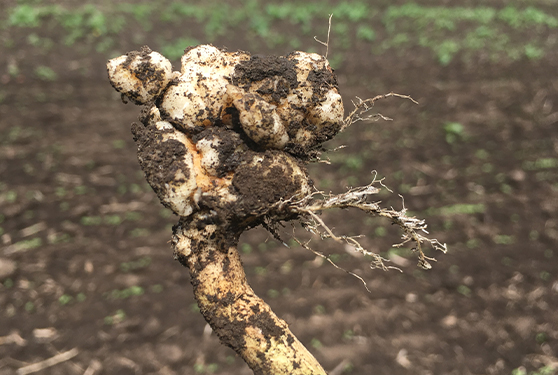 Stanton notes there are hybrids with new sources of clubroot resistance which target specific strains of the new virulent pathotypes. Some hybrids provide layered resistance by stacking both the original source first, while other hybrids use a new source or multiple new sources of resistance genes.

“Using a new source of resistance is definitely a good way to either prevent clubroot from becoming established in your field or to manage clubroot in an active management program where it is established and you’re trying to keep spore loads low,” he says.

Stanton recommends rotating different types of resistance products. That’s because virulent pathotypes present within a clubroot spore population may be multiplying at a lower level but could eventually build up to a level that breaks down resistance.

“If you’ve detected virulent pathotypes that have overcome the original source of resistance, you may never want to go back to an original source hybrid again. In this case, you may want to rotate with all the different, newer source options and use multiple hybrids with different resistances over time to try to bring the spore load back down.”

Stanton notes that when choosing clubroot-resistant hybrids, it’s important to be aware of what’s going on with canola crops in your local area.

“With clubroot spores, it is the population in the field that matters,” he says. “In a field that has been managed for clubroot since 2009, the spores will have the original source applied to them multiple times, so it is likely time for the grower to switch resistance.

“If you know there are some virulent types against the original source of clubroot resistance in your area, then you’d likely want to grow a hybrid with a new source of resistance and rotate between multiple types of new sources going forward,” he adds.

Stanton maintains it’s important for growers to rotate resistance frequently if clubroot has taken hold in their canola fields. For those who haven’t had to deal with clubroot, using clubroot resistant hybrids proactively is a key tool for prevention.

One product that Stanton recommends as part of a comprehensive clubroot management program is the 45CM39 canola hybrid offered by Pioneer brand seed.

“It has a new source of clubroot resistance, so it is resistant to more pathotypes and would perform better than the original source at slightly higher spore loads,” he says.

“It is a top-end hybrid, so you don’t have to sacrifice anything to grow it and manage your clubroot,” he says.

Click to learn how Pioneer is working with Western Canadian farmers to protect canola crops from clubroot.