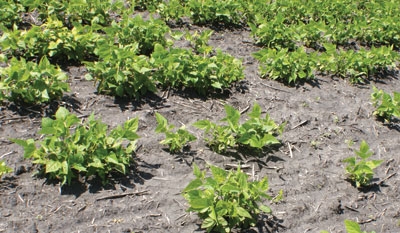 Keep seeding rate up to ensure a uniform plant stand. First-time soybean growers are likely to be popping up this spring across Manitoba

First-time soybean growers are likely to be popping up this spring across Manitoba, particularly in the Red River Valley, says Brent Reid, recently retired farm production advisor for Manitoba Agriculture, Food and Rural Initiatives (MAFRI). “We’re going to see the bulk of the acres increase in the traditional soybean growing areas, the Red River Valley, the Interlake and northeastern agricultural areas.”

Reasons for the new acres include weather, crop insurance and markets. Most of the new growers are likely to be in these “traditional” areas where soybeans have been successful for the past decade.

Neighbours who have held back on trying the relatively new Prairie crop have observed the current wet cycle and success of soybeans in wet conditions. Although Reid is moving on, in official retirement, to become a consultant, he predicts many neighbours of soybean growers will become first-time soybean growers in 2011.

Generally, the supply of heat units for growing soybeans is best in the traditional growing areas. In a non-traditional area, new growers need to be especially careful about seed choice. “The soybean is a long-season crop. You need to give them every chance. Don’t roll the dice on this choice, hoping we’ll have a long fall without a killing frost. For your first soybean crop, choose a variety that won’t have an issue with season length; that’s critical.”

Inoculant 1-2-3
First-time growers may be happy to know they do not need nitrogen for the new soybean crop, but there is an offset.

“The second thing is that, if they’re putting them on land that’s never had soybeans, don’t skimp on the inoculation. They really have to get that right; if they don’t get that one right, the yield will be limited,” cautions Reid.

Soybeans should be grown on fields with low nitrogen levels, preferably less than 30 lbs per acre of available nitrogen. However, they do need 200 to 250 lbs of N during the growing season, and they need serious help at getting it out of the air and soil.

When soybeans are planted in a field that has not had soybeans grown previously, Reid says growers should plan a granular inoculant in-furrow with the seed, and also inoculate the seed with either a liquid or peat inoculant. Inoculants contain Rhizobia strains that colonize the soybean roots to fix nitrogen.

Two inoculants may sound like a lot, but the double treatment helps ensure adequate nodulation and N-fixation with a Rhizobia strain specifically formulated for soybeans. Also, be prepared to add an inoculant extender if necessary. “The inoculant is alive. You’ve got to treat it properly. Some seed comes pre-inoculated, but be cautious about storing seed that’s already inoculated. An extender will give you a longer seeding window. If the weather turns and you can’t get it all seeded at the ideal time, extender will allow you to store the seed and keep the inoculant living a little longer.”

Manitoba experience is showing that the Rhizobia population gradually builds with repeated soybean plantings, but the crop continues to need some inoculant each year for optimum N-fixation and yield.

Some phosphorus, or starter fertilizer, also may be needed at seeding time. On the basis of a soil test, if the seedbed has 15 ppm or more of phosphorus, the soybeans probably will not need additional phosphorus. If the soil test shows less than 10 ppm, put on the P and expect a response.

Reid explains soybeans can “scavenge” for P a little better than other crops. If a grower is seeding when the soil has warmed a bit, and if there is adequate moisture, the scavenging roots probably can take up the P supply they need even if the soil test shows a somewhat
low availability.

Due to seed cost, some farmers have experimented with reducing plant population. The recommended population, Reid explains, is based on the fact that conditions probably will be less than ideal. “If the seed has to sit in the ground a little longer, if it’s a little wet, or if it’s late, maybe the first of June as opposed to May 20, that’s not the time to reduce your population. Those things dictate that you may want to keep your rate up a little bit.”

Timing
Getting that first double-inoculated soybean crop into the furrows, maybe with some phosphorus on the side, requires some pre-planning and good timing for best results. The bean seed needs warmth, so put it into the warmest field that is suitable. “It’s all about temperature,” he said. “You like to seed into soil that’s seven to 10 degrees C. If you’re pushing the envelope a bit on temperature, do your blackest soil first and seed relatively shallow. Shoot for an inch into the soil with a half-inch into moisture, and up to a one-and-one-half-inch maximum depth.”

A big part of the crop’s future germination and growth depends on what happens in the 12 hours after the seedbed is closed and packed. “If the first moisture the seed absorbs is cold, it has a chilling effect that disrupts the cell membranes. Later, those plants will emerge “a little bit” stunted and stay that way,” explains Reid.

The “ballpark” soil temperature for seeding soybeans is 10 degrees. Generally, warmer is better. Seeding in the afternoon and early evening may be better for the seed than a morning run in cold soil. “Ten degrees is a really good target, but it’s not a magic number. You still can seed if it’s a little cooler and you see a nice seeding window that you don’t want to lose.”

Soon after seeding, be prepared to use a land roller to smooth the field for the coming harvest. “Roll for a reason. I wouldn’t roll if I didn’t have a reason, like stones or clods or co
rn stubble. If it’s just to make your land look flat, there’s no need. Rolling it does give you a lot better opportunity in the fall to get your header right on to the ground to basically get all the beans.”

Growing season management
Growing a healthy soybean crop, without weed issues, is one of the more attractive things about soybeans. Estimates suggest that Roundup-Ready seed is sold for 93 percent of soybeans in Manitoba. Unless there is a weed resistance issue, two applications of glyphosate will mean a nearly weed-free crop.

The exception: “The one weed that can catch you off guard is volunteer Roundup Ready canola. Scout you fields before you do the second glyphosate application. If you see canola that could be Roundup Ready, you have to add something to the tank to take out that Roundup-Ready canola.”

Soybean pests probably will not be serious for a first-time crop, but listen for the pest reports. Soybean aphids can blow in from North Dakota, for instance. The best plan is to scout the field, four or five times, during June, July and August.

Root rot can occur but is not likely for a first-time soybean crop. There are seed treatments to prevent it, but a good field rotation with cereals should prevent most root rot issues.

White mould, or sclerotinia, is a different story and highly dependent on weather. As with canola, sclerotinia flourishes if it can hit soybeans in the flowering stage with wet growing conditions. Unlike canola, there is only one registered foliar treatment for controlling white mould in a soybean crop. “You can spray a bio-fungicide called Serenade, but I really haven’t seen it in action,” he says. “Some products are coming out in the next couple of years, but even in the US they don’t really rely on foliar fungicides to control white mould. It’s a little harder in soybeans because you have to get very good penetration into the crop canopy and the timing is a little hard.”

There is one other recently licensed option, if the field is contaminated with sclerotia bodies from a previous canola or sunflower crop. Contans WG, a biological fungicide from UAP Canada, can be soil-applied before the crop is up. The natural soil fungus attacks sclerotia bodies on the soil, reducing the amount of inoculums they can produce.

It will not prevent spores from blowing into a field, and is most effective if it is applied a full year before the first soybean crop is planted in that field.

For harvest, the best way to capture the full crop is with a flex-header, clipping the beans within an inch of the ground. Often, a bushel or two of yield will be down in that bottom two inches between the ground and the lowest branches.

Harvest can begin when soybeans reach 14 percent moisture or less. They store well at 13 percent.


Related
Do you need to inoculate your soybeans every year?
What can we expect from soybeans after a dry year?
Ideal conditions for soybeans
Ontario Soybean Growers issues challenge to growers