But different microbes have distinct roles to play, and environmental factors influence activity.

Under our feet, in the soil, is a wealth of microbial activity. Just like humans have different metabolisms and food choices, so do those microbes. In fact, microbes play an important role in making nutrients available to plants.

A recent review paper from Xinda Lu, a researcher at Massachusetts Institute of Technology, and his team looks at different roles that various soil microbes have in soil’s nitrogen cycle.

According to Lu, “Soil microbes catalyze most of the transformations of soil nitrogen into plant-usable forms. Diverse microbes use different processes – and sometimes work together. Knowing the various styles of soil microbes, and linking microbes to specific soil processes, can be important knowledge for farmers.”

Modern nitrogen fertilizers are applied in the form of ammonium. Through a biological process called nitrification, soil microbes convert ammonium to nitrates that plants can absorb. In order to be efficient at this process, microbes need oxygen. Researchers are studying nitrification because it can be linked to greenhouse gases and loss of fertilizer.

Although microbiologists have been studying the nitrogen cycle for over a century, not all steps were well understood. New micro-organisms have recently been identified. A type of prokaryote (single-celled organism) called archaea has also been playing a role in nitrification.

Archaea are not technically soil bacteria, due to their structure. There are many more archaea that contribute to nitrification in some soils than there are bacteria responsible for the same activity. Including the role of archaea in nitrification has broadened the understanding of scientists and researchers. 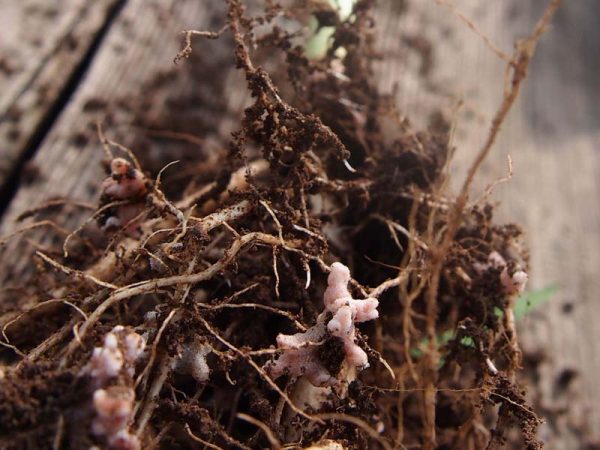 Nodules forming on the root of a soybean plant. These nodules will give a home to soil microbes in exchange for nitrogen. Photo courtesy of Vivian Wauters.

Researchers reviewed various studies of soil nitrification. This included the abundance of microbes in soil in relation to various environmental factors. Soil pH, temperature and the ratio of soil carbon to soil nitrogen were all compared to the number of microbes in each soil sample. Soil depth and other factors also influence microbe abundance.

Previous studies have shown, for example, that nitrification archaea are more abundant than bacteria in warmer temperatures. Other microbes thrive in lower temperatures.

Soil pH also influences how active soil microbes are in the nitrification process. Soil bacteria Nitrospira (a genus of bacteria that perform the nitrate oxidation step of nitrification) were more dominant in acidic soils, including forests and farm fields.

Researchers have also studied how various microbes “talk” to each other. This keeps the nitrification process running smoothly. Various mechanisms have been proposed, including cell signalling. The presence of nitric oxide in soils may enhance interactions between microbes.

Soil scientists are sure they have not found all the microbes that contribute to the vast array of services soils provide. Just as astronomers discover new stars in the sky as tools advance, so will soil microbiologists find new soil microbes. Some may be involved in nitrification.

Collecting and cataloging the type, abundance and location of soil microbes will continue to advance the knowledge we have about the soil nitrogen cycle.

The review was recently published in Soil Science Society of America Journal. Funding was provided by the Oregon Agricultural Research Foundation and the Natural Sciences and Engineering Research Council of Canada.