Features Fertility and Nutrients
Do EEF nitrogen products fit on your farm? 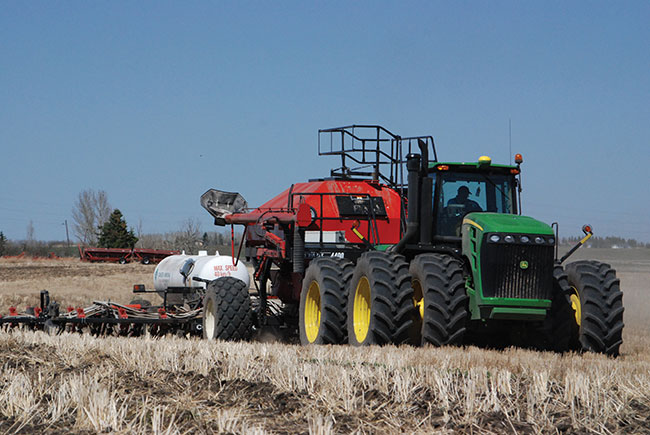 Anhydrous ammonia was the most profitable N source, because it is lower priced than EEF fertilizers. Photo by Bruce Barker.

Enhanced efficiency nitrogen (N) fertilizers are designed to improve crop N use efficiencies and reduce N losses. But when and where do they pay off for farmers? A research study led by Symon Mezbahuddin at Alberta Agriculture and Forestry in Edmonton looked into that question.

“We found that product price was the biggest driver of economic return,” says Mezbahuddin, a geomatics and modeling specialist. “That was the biggest learning from the project.”

The research conducted a meta analysis of grain yield data collected from researchers across Western Canada. It was funded by Western Grains Research Foundation, Alberta Canola, Alberta Barley, InnoTech Alberta, and Alberta Agriculture and Forestry. Mezbahuddin worked with 10 collaborators on the project.

More than 10,000 data entries from Alberta were collected on enhanced efficiency fertilizer (EEF) products, including controlled release urea (ESN), Super U, eNtrench, N Serve, and different blends of urea and ESN. Crops included wheat, barley and canola, but Mezbahuddin says the most robust data set was for Northern Hard Red (NHR) spring wheat, covering a range of N fertilizer products, timing and placement across different soils and weather in Alberta.

Mezbahuddin built crop yield response models with optimum, intermediate and low moisture levels for eight different agricultural soil zones across Alberta, and for different fertilizer N application timings and placements, and for the different EEF N products. Available N was based on soil test nitrate-N + N from previous crop residue + estimated N released through mineralization + manure N if any. He subsequently conducted cost-benefit and sensitivity analyses to determine the optimum fertilizer N rate or yield for each fertilizer product.

Generally, the meta analysis found that as fertilizer N price increased, as it does with EEF products, the economically optimum yield decreased. For example, the economically optimum yield for NHR wheat in the Dark Brown soil zone, with 322 millimetres of May-August precipitation, when fertilizer was applied in the fall, was approximately 80 bushels per acre (bu/ac) for anhydrous ammonia ($0.47/lb. N), compared to around 75 bu/ac for ESN ($0.69 lb. N). At an expected price of $6.56 per bushel, that extra five bushels means $32.80 per acre higher profitability. For this example, Mezbahuddin chose an investment ration (IR) of 1.5, meaning that for each $1 spent on N fertilizer, the expected return would be $1.50. 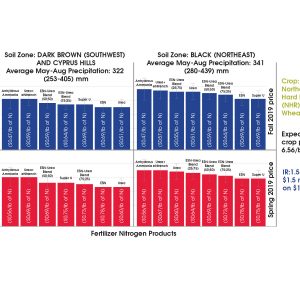 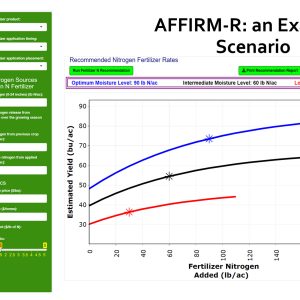 An outlier was urea (46-0-0), which, while cheaper than EEF fertilizers, may have lost some yield due to N losses and didn’t perform as well as other fertilizer products.

The modeling has been incorporated into the Alberta Farm Fertilizer Information and Recommendation Manager (AFFIRM). AFFIRM software will allow the user to evaluate fertilizer nutrient requirements for crop production based on Alberta research and production economics. Information specific to the user’s situation is entered into this decision support system to obtain a fertilizer recommendation and/or to test various cropping scenarios. Based on the results of these scenarios, the user can make a final decision on fertilizer requirements. Location-specific data make these recommendations more accurate.

The AFFIRM-R companion version with the EEF modeling is found separately at: mezbahu.shinyapps.io/AFFIRM_R_version_yield_response_nitrogen. The full AFFIRM v3.0 version that includes all micro- and macro-nutrient recommendations is found on the Alberta Agriculture and Forestry website and can be accessed through MyAlberta Digital ID.

Mezbahuddin says there are still significant gaps in data availability. More field research and data-sharing collaborations are needed to build a comprehensive database, including all major crops and fertilizer product interactions for Alberta.

“The majority of the results have already been implemented into AFFIRM v3.0 for use by Alberta growers, industry and public. The remaining information is also being implemented on a continuous basis to update the AFFIRM webpage in a timely manner,” Mezbahuddin says.