However, research shows the corn-soybean rotation has a number of downfalls, including the lowest soil organic matter, less success with no-till practices, a need for more inputs, increased greenhouse gas emission and less opportunity to incorporate cover crops. It is also associated with reduced yield, input use efficiency and system resiliency.

“Farmers feel corn and soybean is the most profitable rotation,” says Bill Deen, an associate professor at the University of Guelph. “We need to convince them that winter wheat is worth keeping in the rotation and that there are benefits associated with more diversity.”

To help convince them, Deen is leading a research project evaluating the effects rotation complexity has on yield stability under moisture extremes. The project is co-funded by the Grain Farmers of Ontario, the Canadian Foundation for Innovation and the Loblaw Operating Fund.

The project
The researchers are using data collected from long-term trials initiated in 1980 in Ridgetown, Ont., and Elora, Ont., which involved rotations with single to three crops plus a cover crop with tillage and no-till. Those studies show crop diversity increases the probability of a high yield and reduces the probability of a low yield.

“If you use a more diverse rotation, corn yield goes up five to six per cent in Ridgetown and Elora,” Deen says. “If you add wheat into the corn-soybean rotation, the bigger effect is on soybean yield. It goes up 13 or 14 per cent. That’s the benefit of wheat.”

Deen and his team were specifically interested in how rotation complexity in tillage and no-till systems alters the amount of soil water available to plants, the corn and soybean’s abilities to use water resources and the effect all of this has on yields under imposed drought stress. Using the data from the long-term rotation/tillage trial established in 1980 at the Elora research station, they discovered that although rotation diversity provides benefits in years with above-average rainfall, the benefit is much greater in dry years.

“We’ve proved that with good rotations you get more stable yields and improved resiliency in drought conditions, particularly after forage,” Deen says. “There is a direct relationship between grain yield and transpiration: higher yield requires more water. Diverse rotations reduce the likelihood of drought stress particularly when yield potential is high.”

Climate change could accentuate drought effects in the future. “Climate change, higher yields, biomass removal could all accentuate the problem of drought stress,” Deen says. “We need crop rotation to minimize that stress.”

The researchers are confident this research will do just that by helping to identify management practices instrumental to adapting Ontario’s most abundant cropping system to changes in climate, as well as to improve productivity and water-use efficiencies under an increasingly challenging environment.

“Good soil health is difficult to achieve when you’re using a simple corn-soybean rotation,” Deen says. “If you’re serious about soil health and increased yields, it is important to consider increasing rotation diversity.”

What’s next?
For the past year and a half, Deen and his team have been working towards determining what mechanisms enable complex rotations to have more drought tolerance. “Why do diverse crop rotations have better resiliency?” Deen asks. “Is it because the soil retains a higher percentage of rainfall? Or is it greater water holding capacity due to improved soil health? Or maybe it is due to crops under diverse rotations have better rooting ability.”

Deen’s team has completed the first year of work imposing drought, irrigated and ambient conditions to specific rotations to look at soil properties and various aspects of plant growth such as water content, water holding capacity, plant transpiration and root morphology. They are now putting the data together to see if future study is needed, and expect results over the next year. 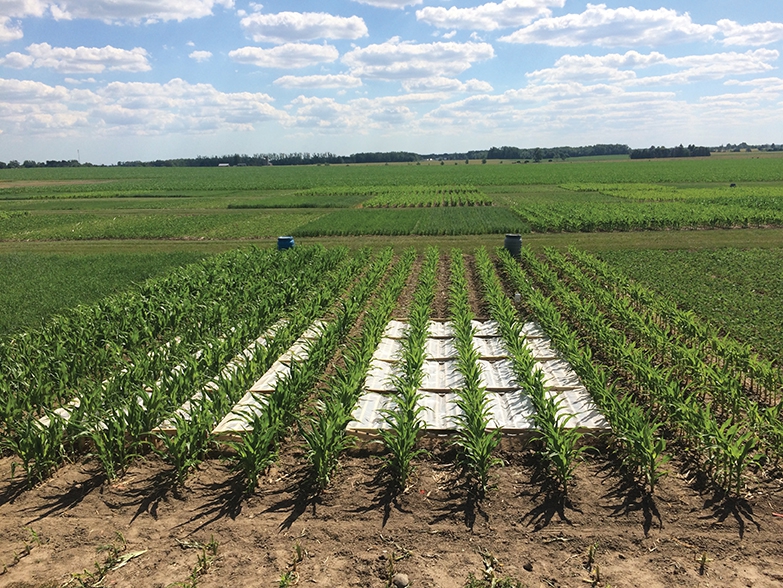 Corn plots with drought treatments during a University of Guelph study looking at diverse rotations for improved resiliency in drought conditions.