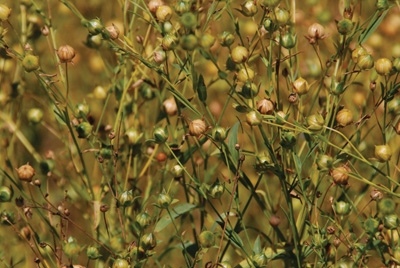 Wheat yield after flax was 16 percent higher than after wheat at Scott. Crop rotations are designed to maintain crop and soil health to ensure long-term sustainability. Crop sequences deal with the effects of previous crops on current crop choice.

1. What crops should I include in my rotation?
Diversity is key. Growing cereals, oilseeds and pulses in a long-term rotation has been shown to provide the best benefit to soils and to crop yields. Wheat grown in a rotation with oilseeds and pulses was 16 percent higher yielding than continuous wheat grown on the same land at Scott, Saskatchewan, from 1993 to 1999. Wheat yields following flax, pea, and canola were 16 percent, 11 percent, and eight percent higher, respectively, than after wheat (Manitoba Crop Insurance data, Bourgeois and Entz, 1996).

Pulses or legumes can fix up to 80 percent of the nitrogen they need from the air, which reduces the amount of nitrogen removed from the soil. For annual crops, fababean has the highest nitrogen-fixing capability and can fix amounts similar to perennial legumes such as alfalfa (Table 1). Pulse or legume residue has a significant amount of nitrogen in it, which then will become available to future crops as it decomposes. Thus legumes increase the nitrogen supplying power of the soil and can reduce the requirement for nitrogen fertilizer for succeeding crops. A nitrogen credit is included in the soil test recommendation made by Saskatchewan soil-testing labs if you report your previous crop as a legume.

3. How much water is available and where are the nutrients?
Rooting patterns, crop maturity and growth stage can influence nutrient uptake and water use. The deeper the roots, the more accessible they are to water and nutrients found farther down in the soil profile. Varying crops in a sequence allows you to take advantage of the different root patterns and growth habits to access water and nutrients at different levels and at different times of the year.

Canola and mustard love water and nutrients, and are deeply rooted. Thus, canola and mustard are a good fit for wetter areas of the province as they can penetrate deep into the soil to reduce subsoil moisture and access nutrients that may have leached deeper into the soil profile. The deeper tap roots also help with improving soil aeration and drainage. Cereal crops are also deep rooted but tend to need the moisture earlier in the season and can withstand drier conditions better than canola. Pea and lentil are shallow rooted and have shorter maturities. This means that there will likely be more moisture left in pea or lentil stubble than cereal or canola stubble.

4. Are there soil biology considerations that may influence crop choice?
Soil biology is also important. For example, mycorrhizal fungi in the soil form mutually beneficial relationships with most plants. The fungi penetrate the roots and extend hyphae (threads) into the soil where they can access more nutrients and water for the plant. Thus, they serve as highly effective transport systems. Pulses form strong associations with these mycorrhizal fungi, while cereals are less dependent, and canola and other Brassicas do not generally form these associations. It is suggested that highly mycorrhizal crops may fit best after a crop that is at least somewhat mycorrhizal; for example, planting peas on cereal stubble. This may somewhat explain why crops such as peas and flax tend to do better on cereal stubble than on canola stubble.

5. What disease issues did I have in the past and when was the last time I grew this crop?
Crop rotations can be a significant management tool when it comes to residue and soilborne plant disease organisms. Leaving a rest period between certain crops can successfully reduce plant pathogen populations to a level where other disease control methods will work more effectively. Table 2 shows the risk associated with shortening the recommended crop rotation based on the disease of concern.

The general recommendation for cereals is to plant no more than two years in a row and incorporate different cereal species and varieties into the rotation. With canola, blackleg spore numbers and viability of sclerotia (sclerotinia stem rot’s resting bodies) are significantly reduced after four years. Therefore, canola should only be planted once in a four-year rotation. Sclerotinia stem rot can also affect crops such as lentil and pea so it is good practice to avoid growing pulses on canola stubble and vice versa. In fact, the recommendation is to grow peas or lentils no more than once every four years in rotation with canola.

Choose varieties that have disease resistance and consider fungicide use during the growing season. Fungicide products should be rotated (use different active ingredients in succession) to minimize development of resistant pathogen populations.

6. Are there weed issues to consider and is there potential for a high number of volunteers from the previous crop, or is the field fairly clean?
When selecting a crop it is important to consider its weed control needs or limitations. Crops such as lentils, which are uncompetitive and have limited weed control options, should be seeded into the cleanest fields. Matching weedier fields with crops that are more competitive and have better herbicide options is important.

It is not just the presence of weeds but potential volunteers from the previous crop that should be considered. Canola, for example, can be problematic as a volunteer, so having options in next year’s crops is key. Rotating cereals with broadleaf crops usually allows good control of volunteers.

7. Are there residual herbicide considerations?
It is important to know the residual properties of the herbicides you are applying in order to avoid any unwanted cropping restrictions in your crop rotation. The length of time it takes herbicides to break down can vary and is dependent upon a number of factors, including soil organic matter, soil pH, rainfall and temperature. In saturated soil conditions, herbicides that rely on aerobic microbes requiring oxygen may take longer to deactivate. On the other hand, herbicides that rely on a process called chemical hydrolysis will break down equally well in aerobic or anaerobic conditions. Some basic guidelines to follow include:

Herbicides with re-cropping restrictions under dry conditions will most likely have limitations under saturated conditions.
Fields that were seeded but that were saturated for a significant part of the season are unlikely to have seen much herbicide breakdown.
It is important for producers to check with herbicide manufacturers for recommended re-cropping options in fields that were recently saturated. Further information on soil residual herbicides and re-cropping restrictions can be found in the Weed Control Section of the current Guide to Crop Protection.

8. Does my crop selection allow me to rotate herbicides?
Herbicide resistance has been increasing in frequency, particularly with Group 1 and Group 2 herbicides. Weeds that have developed resistance to particular herbicide groups in Saskatchewan include: cleavers, chickweed, green foxtail, kochia, wild mustard, Persian darnel, Russian thistle, stinkweed, wild buckwheat and wild oat. It is estimated that over 90 percent of kochia populations are now resistant to Group 2 herbicides. Rotating or mixing herbicides from different groups on each field (on your farm) is critical to preventing the development of resistance. This is the case with all pesticides, including fungicides, insecticides and herbicides. More information on herbicide groups can be found in the current Guide to Crop Protection, at the beginning of the Weed Control section.

Planning crop rotations is complex. For more information, visit the government of Saskatchewan’s website or contact your Saskatchewan Ministry of Agriculture Regional Crop Specialist or the Agriculture Knowledge Centre at 1-866-457-2377.