As both an oilseed specialist and a farmer, Kubinec feels strongly about the value of longer rotations. “I participate in [Manitoba’s] canola disease survey every year and help crunch the numbers, and I see the increased disease levels in the shorter rotations. Then on our farm, we have some areas that have really good, diverse rotations and some areas that don’t, and when we’re doing the books at the end of the year we can definitely tell which areas are which.”

To demonstrate how tighter rotations can harm a farmer’s bottom line over the longer term, she compares net returns for three rotations: canola/wheat; canola/wheat/flax; and canola/winter wheat/flax/oat/canola/wheat, as shown in the chart below. In this chart, the net profit per acre is (crop yield per acre x crop price per acre) subtract operating costs per acre; the operating costs were determined from the MAFRI Cost of Production guide for 2011.

In this example, the canola/wheat rotation results in increased disease problems over time, which causes the farmer to use a fungicide in Years 3 and 5 to try to maintain yields. With the added fungicide costs, the average annual net returns for the six-year period are about $20 lower for the canola/wheat rotation than for the two longer rotations, despite canola’s high price.

“For example, with blackleg in Manitoba, farmers with tight rotations are now putting in a fungicide with their herbicide from the two- to six-leaf stage to try to control early blackleg.  A farmer with a longer rotation and not as high blackleg pressure probably doesn’t need to have that extra $10 or $15 expense. Things like that start adding up to impact the net returns a farmer could potentially get,” says Kubinec.

She explains that Manitoba’s canola disease surveys, backed up by the field rotation information provided by the farmers, show clearly that the percentage of canola plants with blackleg increases as canola becomes more frequent in the rotation. She says, “Those are real-life results, not plot data. Farmers’ own fields are showing the impacts of shorter rotations.”

Other diseases that tend to increase with shorter rotations include fusarium head blight in cereals, pasmo in flax, Goss’s wilt in corn and ascochyta in field peas. A longer rotation lengthens the time a pathogen must survive without its host plant species, and some pathogen species can survive for only a short time without a host. Shortening the rotation gives the pathogen a better chance to survive and multiply, allowing its population to build up and cause greater damage year after year. In addition, as the population increases, the chances are higher that there will be individuals within the population that are resistant to a control measure. Over time the number of resistant individuals can increase so much that the control measure is no longer effective.

Furthermore, increased disease is not the only problem that can reduce net returns in tight rotations over the long term. Similar to diseases, insect pests can build up under shorter rotations, resulting in decreased crop yields and/or increased control costs, as well as increased risk of the development of resistance.

A short rotation may also draw down soil nutrient levels over time. “For instance, canola and wheat are both very high nitrogen users. If you’re always having canola/wheat/canola/wheat, that can affect nitrogen levels. Canola also uses a lot of sulphur and needs sulphur to get great yields. So if farmers aren’t keeping nitrogen and sulphur levels up high enough, they could be hurting their returns later, especially with sulphur, because deficiencies can impact canola yields quite quickly,” explains Kubinec.

In addition, tight rotations may impact soil moisture content in the soil profile. She notes, “If you’re only using a couple of crops in your rotation, you’ll be taking the soil moisture out of the same few feet of soil from year to year and not accessing any of the moisture that’s lower or higher. So you could potentially be limiting your yields.”

Planning your rotation
A lot of factors go into choosing a good rotation. Kubinec points out that what you planted in 2011 will impact your yields in 2012. In particular, yield data from the Manitoba Agricultural Services Corporation shows that growing the same crop two years in a row

As well, certain crop combinations negatively affect yields, like flax on canola. These negative effects can be caused by a variety of things, such as disease carryover and residual herbicides. For flax on canola, one reason for lower flax yields is that volunteer canola can be challenging to control in flax. Another reason is that flax depends strongly on mycorrhizal fungi in the soil to bring nutrients back to the plant’s roots. But canola is not a mycorrhizae host, so it doesn’t leave behind a network of mycorrhizal strands capable of colonizing the new flax roots early in the season. As a result, the young flax plants have a difficult time getting the nutrients they need.

Farmers consider many other factors when planning a rotation, such as which crops are best suited to the growing conditions in their area and which crops could help in overcoming troublesome disease, weed or insect issues in a field; could allow rotation of herbicide, fungicide and insecticide groups; could require lower inputs, and – of course – have favourable crop prices.

Overall, Kubinec recommends that farmers think about the long term when planning their rotations. “I’ve seen long rotations versus short rotations, and how quickly some problems can start to happen with shorter rotations, causing net returns to start going down. The way that canola prices have been in the past few years definitely makes farmers lean toward shorter rotations, but it’s important to think long term as well.” 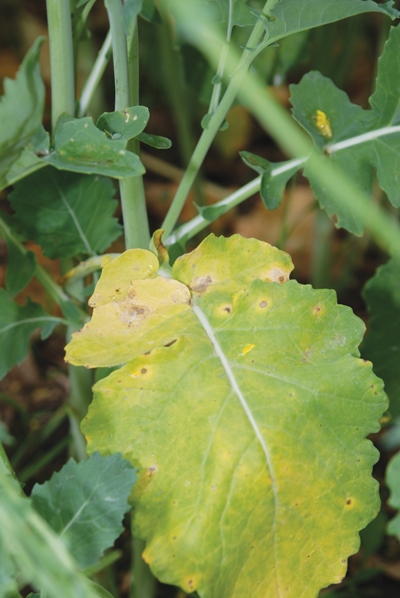