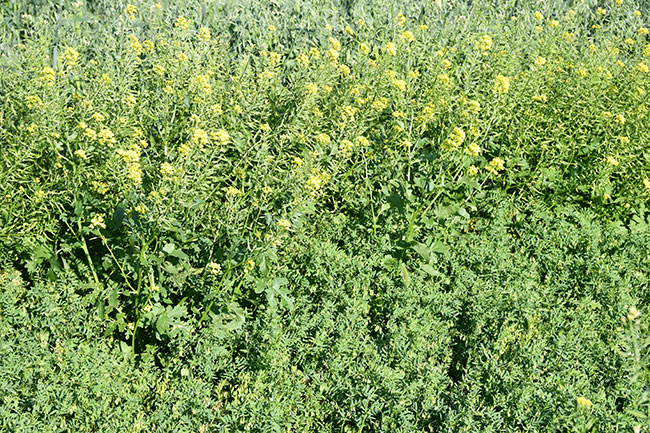 Mustard and lentil intercrop trials under organic management at SCRDC. All photos courtesy of the Organic Research Program at the Swift Current Research and Development Centre.

Under organic production, intercropping a nitrogen-fixing crop with another species is an alternative to the lack of economic returns on legume green manures. Intercropping is also known to provide disease suppression in some cropping systems. However, little is known about the potential impact of intercropping on root rot and fungal pathogens, especially in semi-arid regions.

“As part of a larger organic intercropping study, we wanted to take a closer look at the potential impacts of different intercrops on root disease development and underground fungal pathogens,” explains Myriam Fernandez, research scientist and principal investigator with Agriculture and Agri-Food Canada (AAFC) at the Swift Current Research and Development Centre (SCRDC) in Saskatchewan.

“In terms of crop disease research under intercrops, root diseases and underground pathogens tend to receive less attention than above-ground diseases, so we don’t have as much information as we would like. And the changes in agronomic practices, such as the move to primarily reduced tillage and away from summerfallow has also changed the complex of underground pathogens and incidence of root diseases, such as increases in the prevalence of Fusarium species.”

A two-year study was conducted in 2017 and 2018. The objective was to determine how intercropping a legume with a cereal (field pea-oat) or oilseed (lentil-yellow mustard) might impact disease development and the abundance and diversity of fungal populations colonizing below-ground tissue as compared to their respective monocrops. In 2018 and 2019, durum wheat was also seeded across all treatments to determine underground pathogen carryover and disease implications for this subsequent crop, such as Fusarium species that can cause serious diseases like Fusarium head blight (FHB), in addition to root and crown rot. The trials were conducted at AAFC Swift Current in the semi-arid region of the Prairies. The AAFC project collaborators included Prabhath Lokuruge, Lobna Abdellatif and Mike Schellenberg.

In preparation for the study, the organic field plots were seeded in the preceding year with a cocktail mixture of a legume, an oilseed and a cereal, which were incorporated at flowering using a tandem disc harrow. The study treatments consisted of the two-crop intercrop combinations as mixed rows to maximize their interaction and promote the exchange of N between crop species, and their respective monocrops, at three different seeding ratios. The seeding rate was 25 per cent higher than recommended for this area for non-organic production. A variety of root pathogens and other fungal species present in the crops grown in different mixtures and root rot severity in each of these, compared to their respective monocrops, were identified and quantified. Although growing conditions in 2016 were much wetter than normal, very dry conditions occurred over the duration of this study.

“The results of the intercropping study showed that root rot was significantly affected by the crop treatments in both years and varied by environmental conditions and identified pathogens,” Fernandez explains. “Root rot severity was higher in 2018 than in 2017 for legumes, in both monocrops and intercrops. However, the variation among treatments was less consistent in lentil-mustard than in field pea-oat. The results also showed that neither grain yield nor biomass were affected by root rot levels. Other factors, such as abiotic stresses due to the dry growing conditions, were likely more important than root disease in both years and might have masked any impact of root rot on crop growth.” 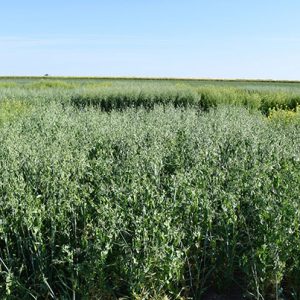 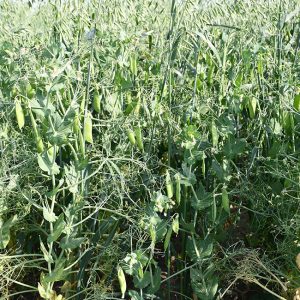 In this intercrop combination, the oat crop provides support for the field pea to climb.

The study also showed that the majority of the underground fungi were ubiquitous across all of the treatments. With the exception of a few fungi, all of the identified fungal species found in the monocrops were also present in their intercropping combinations. Although fungal communities were highly influenced by the crop species, they were not always affected by intercropping. Intercropping lentil with mustard resulted in lower root rot in lentil than in the monocrop, or the intercrop with the highest lentil ratio. The main lentil pathogens declined when intercropped with the highest mustard ratio, which could be due to the allelopathic potential of mustard. The mustard monocrop had the lowest root rot severity. However, root rot in pea intercropped with oat was greater than in the pea monocrop. This is likely attributed to the higher number of fungal populations, including pathogens, that were similar between these two crops than between lentil and mustard. On the other hand, disease severity in oat was similar or higher in the monocrop than when intercropped with pea. The FHB pathogens F. graminearum and F. culmorum, which were present at their highest levels in oat, tended to decrease in the intercrops.

“The most common fungal species isolated from affected roots of all crops were Fusarium spp., including the pathogenic species F. avenaceum, F. culmorum, F. oxysporum, and F. solani,” Fernandez notes. “Along with pathogens, other weakly pathogenic or saprophytic species were identified. Of all of the crops, mustard had the lowest levels of total Fusarium spp. We also isolated a different set of Fusarium species only from mustard, but none have been reported to be pathogenic on this crop. Given the wide host range of one of the most commonly isolated Fusarium species, F. avenaceum, in this study, this pathogen is not likely going to be suppressed to a great extent by intercropping. We also did testing for Aphanomyces, but likely due to the dry conditions the results were negative. Unfortunately, due to the impacts of COVID, we are still processing the subsequent durum crops for pathogen isolation and identification.”

One interesting finding was that the non-legume crops provided the highest microbial diversity in the mixtures – some pathogenic and others not. Both oat and mustard had a greater proportion of indicator species not known for being pathogenic on these crops compared to legumes, whose indicator species were mostly pathogenic. The study also found that, compared to mustard, there were more indicator species in oat when intercropped than when grown as a monocrop, some of which are known for their biocontrol potential. Therefore, companion crops with allelopathic properties such as mustard could be considered when planning intercrop mixes.

“Along with potential disease suppression of intercropping, we did find some other interesting benefits,” Fernandez adds. “In both years of the study, the thousand kernel weight of oats was consistently higher in the intercrop than in the oat monoculture regardless of the seeding mix ratio. Although we don’t have the protein data analysis completed yet, this consistent higher thousand kernel weight in oat is important. 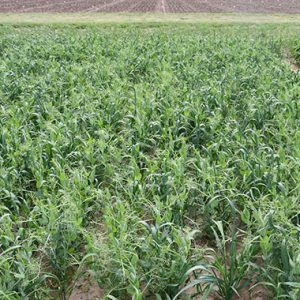 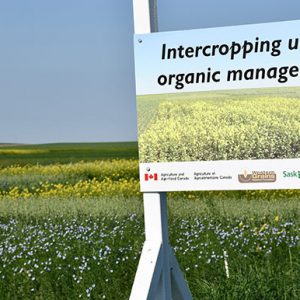 “Another benefit to the intercrop is the support that the oat crop provided for the field pea to climb. We are also interested to see the disease incidence and protein data results from the subsequent durum wheat crop once that is completed. We want to know what the impact of the carryover of pathogen inoculum is to that next crop, such as durum, particularly for diseases such as FHB, and whether or not intercropping might bring some benefits.”

Going forward, Fernandez has a new four-year study underway to continue evaluating different combinations of crops and seeding ratios, including intercropping barley with lentil and mustard with chickling vetch, in addition to cereals underseeded to clovers. Different legumes are also being compared as cover crops, such as clover species, to see if some might be less susceptible to root rot pathogens. One objective is to hopefully find legumes that are not detrimental at increasing Fusarium pathogens or other pathogens, such as those causing Aphanomyces. This research will help to identify the factors that might affect the fungal communities for given sets of crop species grown together at different ratios and under different environmental conditions.

“Overall, our study shows benefits to intercropping, but that the impacts on crop diseases were varied between years, among pathogens, and mixture compositions,” Fernandez says. “Especially in our semi-arid environment and under the dry conditions during the study, intercropping may not necessarily suppress root diseases, depending on the component crops and the associated underground fungal communities.” Project funders were Western Grain Research Foundation, SaskWheat, SaskPulse, and Agriculture and Agri-Food Canada, with in-kind contributions from Grain Millers, Imperial Seed and producers in the Advisory Committee on Organic Research at SCRDC-AAFC.