Root rot and leaf spot diseases can be an annual problem for cereal growers, yet despite many years of cereal production in Western Canada, much is still to be learned about controlling these diseases in both organic and conventional farming systems. Research in Western Canada assessed resistance to the diseases some years ago, but much more could be done. 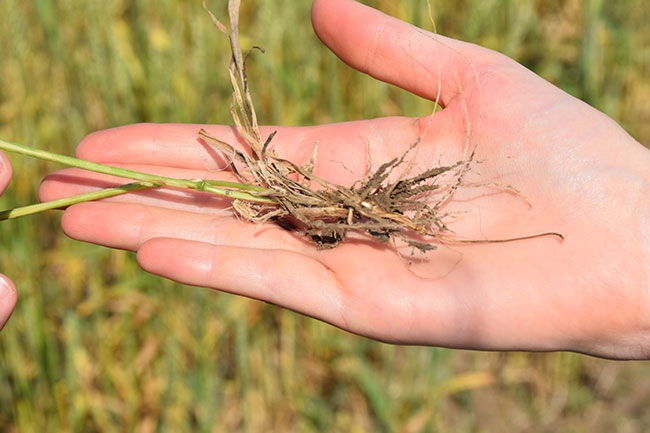 Root rot is on the rise in all crops. Root rot and leaf spot diseases can be an annual problem for cereal growers

“As far as I know there is no work on root rot in wheat being done at the present time,” says Myriam Fernandez, a research scientist at Agriculture and Agri-Food Canada’s Swift Current Research and Development Centre. “Unfortunately, root rots are on the rise in all crop species because of increased growing season precipitation. It’s not easy for producers to identify this disease, even though root rot also causes symptoms above ground. Unless the plants are pulled up and roots examined, a producer would most likely not associate those symptoms with what’s happening below ground.”

Several years ago, Fernandez obtained funding from the Organic Market Sector Development Initiative of the Canadian Wheat Board, which allowed her to evaluate the cultivars and species most widely used by organic producers for leaf spot and root rot reactions. The research was conducted over the 2010 to 2012 growing seasons.

Red Fife was one of the original hard red spring wheat varieties grown in Western Canada and is popular with organic wheat growers.

Kamut is a registered trademark of khorasan wheat – an ancient grain also popular in organic circles.

Resistance to root rots
Common root rot is caused by fungal pathogens; Cochliobolus sativus and Fusarium species are the two main pathogens in Western Canada. Root rot stunts the plant’s roots and interferes with moisture and nutrient uptake. They are expected in most fields.

For all three years, the greatest mean common root rot severity was observed in spelt wheat, followed by durum wheat and Kamut; common wheat had the lowest average severity.

Root rot is on the rise in all crops.

“For leaf spots, although every year we contribute to the leaf spot ratings in the Varieties of Grain Crops, those ratings are from different years, under different conditions and different areas, given that they are taken from the co-op registration trials we evaluate every year,” Fernandez explains.

What it all means
“Although the study took place under organic conditions, the results are also useful for conventional and low-input production systems for helping growers to decide which cultivars to grow,” Fernandez says. “This information is, in particular, useful for producers who are looking for alternatives to chemical control.”

There is also evidence that Fusarium spp. in roots and/or crowns not only increase with conventional management, but also with rotation with susceptible species, especially pulses. A number of years ago, Fernandez was involved in research at AAFC Scott, in Saskatchewan, and found that Fusarium spp. were more frequently isolated from roots/crowns of wheat in conventional rather than organic ystems, while the Cochliobolus sativus pathogen was less common in conventional compared to organic systems. The Cochliobolus sativus root rot and leaf spotting pathogen (responsible for spot blotch) appears to react differently depending on agronomic practices.

“When we started our organic research program here at Swift Current, we observed that these differences between conventional and organic management in root and crown infection by Fusarium spp. were even greater,” Fernandez says. “Our report on these findings at Scott was the first, and I believe it’s still the only one, reporting these differences in North America.”

While leaf spot resistance ratings in wheat are provided in the seed variety guides published by the agriculture departments in each province, root rot resistance ratings are not available. Fernandez says that although some of the seedling blight in cereals can be controlled, to a certain extent, by chemical seed treatments, it is not possible to control root rot chemically, so having individual variety ratings is a benefit to both organic and conventional producers.

Moreover, some of the pathogens that cause root rot in cereals and other crops are Fusarium spp., some of which also cause Fusarium head blight, while C. sativus, which causes spot blotch on leaves, also causes black point and root and/or crown rot.

“It’s expected that information on the relative susceptibility of registered cultivars to root rot would help farmers to make a decision, especially if this disease has been affecting their cereal crops,” Fernandez says. “The same applies to leaf spots.”