Features
Digging into weed seed mortality in the soil 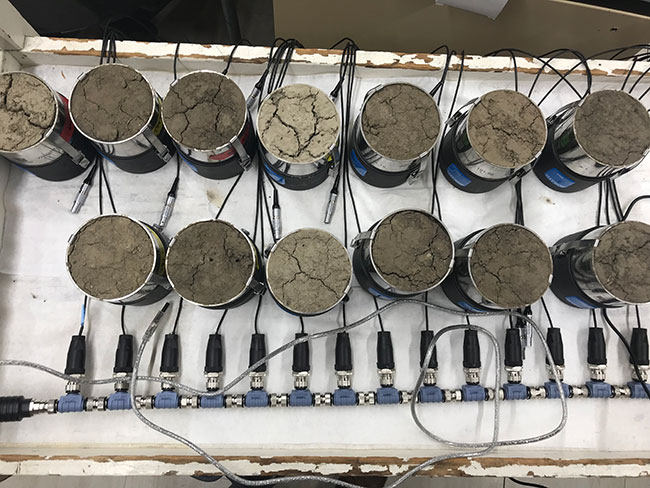 Herbicide-resistant weeds are some of the toughest weed problems around. Alternative control methods that target these weeds at different stages of their life cycles are being developed and adopted. Now an intriguing project is focusing on weed seeds while they are in the soil seedbank.

“In this project, we’re trying to tease apart what properties of soils are related to the decay of weed seeds in the soil seedbank,” says the project’s lead investigator Charles Geddes, a research scientist in weed ecology and cropping systems at Agriculture and Agri-Food Canada (AAFC) in Lethbridge.

Once he and his research group obtain that information, they will be able to look into management practices that influence those soil properties and begin developing new tools to add to the integrated toolbox for managing herbicide-resistant weeds – and for slowing the spread of more herbicide resistance problems.

Soil texture connection
Geddes first looked into the effects of soil characteristics on weed seed persistence as part of his PhD research at the University of Manitoba a few years ago.

“I was working on managing volunteer canola in soybean production because canola and soybean have similar herbicide resistance traits, making control of volunteer canola in soybean crops a challenge,” he explains. “I found some research from Germany that showed soil texture could impact the persistence of canola seed in the soil seedbank, at least under the conditions there. One of my experiments looked at whether we would see those same effects here in Western Canada.”

The team working on this experiment collected nine different soils from across southern Manitoba, with textures ranging from clay to loamy sand. They filled pots with these soils, buried canola seeds in the pots, and then buried the pots at two Manitoba locations. Then they evaluated the effect of soil texture and some other soil characteristics on seed survival over winter and over summer.

“There are probably a lot of contributing factors, but we think the main reason for greater overwinter persistence in clay soils is due to what is called secondary seed dormancy.”

He explains that seed dormancy means a seed cannot germinate immediately despite favourable conditions for germination. So dormancy affects a seed’s ultimate fate – whether that is germination or death – and how quickly it journeys to that fate.

In canola, dry conditions can induce secondary dormancy. Geddes thinks the seeds are more likely to experience dry conditions in clay soils than in sandy soils because clay soils hold onto moisture more tightly. That makes it more difficult for the seeds to take up moisture, especially if soil moisture levels are low. So in clay soils, there tends to be greater induction of secondary dormancy in the fall and, as a result, greater overwinter persistence of canola seeds. 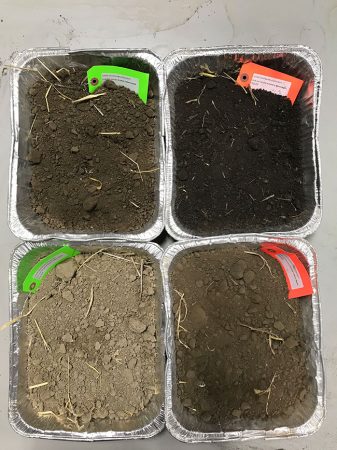 These are a few examples of the wide variety of soils being compared in Geddes’ current project on the effects of soil properties on weed seed mortality in the soil seedbank.
Photo courtesy of Charles Geddes.

What else affects seedbank mortality?
Geddes’ current project, which started in 2018, is making use of a unique set of plots established about 30 years ago at AAFC-Lethbridge. “Back in 1990, researchers here removed the A horizon of the soil in a field. Then they trucked in 36 different soils from all over southern Alberta and arranged them in plots in the field, basically replacing the A horizon with those 36 different soils,” he says. The plots were originally used for a long-term experiment to investigate how different soil properties influence crop productivity.

Geddes and his research group are now using these plots to conduct seed burial experiments. “The original 36 soils came from a wide diversity of production systems and encompass a very large range in soil properties. And we are interested in the association of a large number of soil properties with the persistence of weed seeds over time.”

Their seed burial experiments involve canola and wild oat; many wild oat populations on the Prairies have resistance to one or more herbicide modes of action.

In one set of experiments, the research group is burying the seeds in the fall and recovering them in the spring. In the other, they are burying the seeds in the spring and recovering them in the fall. The seeds are buried 10 centimetres deep because research shows this depth is great enough to help prevent the seed from germinating.

Since soil-water dynamics likely play a large role in seed persistence, the project is continuously tracking soil moisture and temperature in the plots. The sensors are placed at a 10-centimetre depth to monitor the conditions immediately around the seeds. The resulting temperature and moisture datasets are being used in developing models to look at how these factors affect seed persistence.

Towards new tools
Their analysis of the soil samples is ongoing. Once they have compiled a complete dataset of the 36 soils, they will be able to identify which soil parameters have the strongest associations with seed persistence and mortality.

Geddes thinks they will likely find a number of different parameters associated with seed persistence, such as soil texture, soil moisture, and perhaps soil pathogens or other characteristics. “For instance, we found during my PhD that soil nitrate concentrations tended to be quite highly associated with seed persistence. Soils with greater nitrate concentrations had a greater persistence of canola seed over the winter, but they had the opposite effect on persistence in the summer.”

“That tells us that the conditions in the soil seedbank are somehow driving seed persistence. I think we will probably have some really interesting results for what soil properties are driving the persistence.”

He notes, “This project is a bit more upstream than a typical agronomy experiment. But once we define what soil properties can result in reduced persistence of the weed seedbank, then in our future research we could look at it from more of a systems perspective. One of the main questions would be: are those properties also the properties that would be contributing to a healthy soil and a productive crop?

“And we could also look at how various management practices – like using tillage versus no-tillage, growing cover crops, or applying manure or compost – impact those soil properties over time and affect seed persistence in the soil seedbank.”

Ultimately, Geddes and his research group want to develop new weed control tools that are directly applicable on Prairie farms. And the more tools that growers have for managing herbicide-resistant weeds, the better.