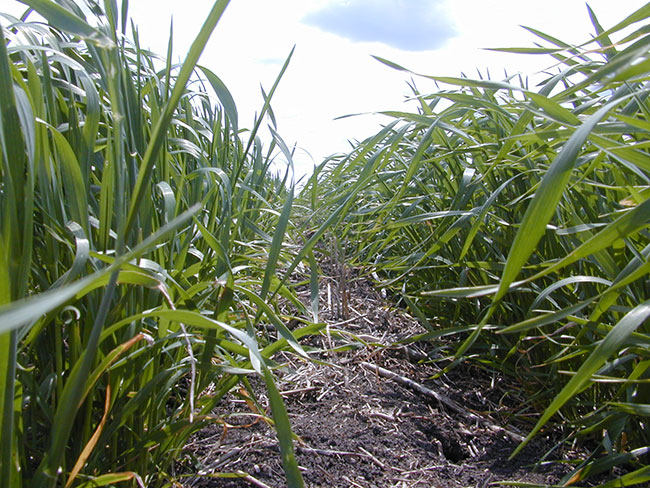 In the biocontrol world, most people think of beneficial insects as those that attack insect pests, such as the thirteen-spotted lady beetle consuming up to 160 aphids in 24 hours. But there are other beneficial insects out there at ground level quietly munching their way through the weed seedbank. These seed predators, such as ground beetles and crickets, can substantially reduce the amount of weed seed going into the seedbank.

“It’s very contextual as to how significant seed predation can impact the weed seedbank because there are so many different environmental interactions,” says Christian Willenborg, associate professor in the department of plant sciences at the University of Saskatchewan. “The predators can be there every year, but it is a very complicated network that depends on the types of weeds, the habitat, and the ground beetles that are present and attacking as seed predators.”

Typically in the weeds world, biocontrol is thought of as a specific insect targeting a specific weed. For example, Aphthona nigriscutis, or black dot beetle, has had a significant impact on leafy spurge populations.

Seed predation is different, and is a form of biocontrol that doesn’t target a particular plant. Rather, seed predators are generalists that eat many seeds that can contribute to the weed seedbank. In addition to ground beetles (Carabid beetles), mice, birds and earthworms can also feed on weed seeds. Some studies have found that rodents contribute to an equal or greater proportion of seed consumption than invertebrates.

In Europe, research has found that seed predators can consume large portions of weed seeds headed for the seedbank. At Wageningen University in the Netherlands, Westerman et al. found that “annual seed loss due to predation [number of seeds consumed per number of seeds produced per year] ranged from 32 to 70 per cent with continuous predator exposure from seed shed to harvest.” At the Research Institute of Crop Production, Prague, Czech Republic, Honek et al. found that “predation of seed on the ground in arable fields can be as high as 1,000 seeds per square metre per day by ground beetles.”

Kulkarni’s first study investigated the preferences of four adult carabids for volunteer canola, stinkweed and wild mustard. She essentially laid out a smorgasbord for the carabids, and let them eat as much as they wanted of what they wanted. All carabid species preferred volunteer canola seeds the most, followed by wild mustard seeds, and then stinkweed. Beetles highly preferred seeds of all three weeds that had taken up moisture (imbibed) compared to dry seed. The density of the carabids and how active they were accounted for 67 per cent of the observed variation in seed removal. 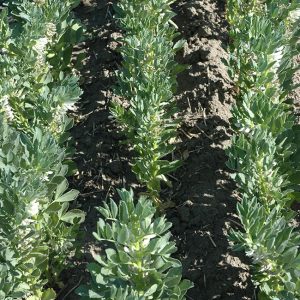 In pulse crops, Willenborg found seed predation reached as high as 85 per cent of volunteer canola, and 55 per cent of kochia weed seeds. Photo by Top Crop Manager. 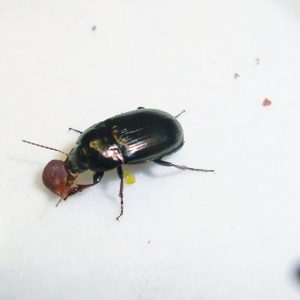 Carabid beetles can put a significant dent into the weed seedbank. Photo courtesy of Sharavari Kulkarni.

Encouraging seed predators
Willenborg says that farmers can use multiple strategies to try to encourage seed predation. It basically comes down to Maslow’s Hierarchy of Needs theory, where basic food, water and shelter are the primary needs. Anything that encourages biodiversity usually encourages seed predators.

Pesticide application can also be detrimental to seed predators. Many pesticides that will kill a pollinator will also likely to kill a ground beetle, Willenborg says.

“The economic impact of seed predators might seem small in some cases, especially because we cannot directly observe their actions or results, but the predators are there and they’re working for free,” Willenborg says. “I am hard-pressed to think of any other type of free weed control growers can obtain within their cropping systems.”