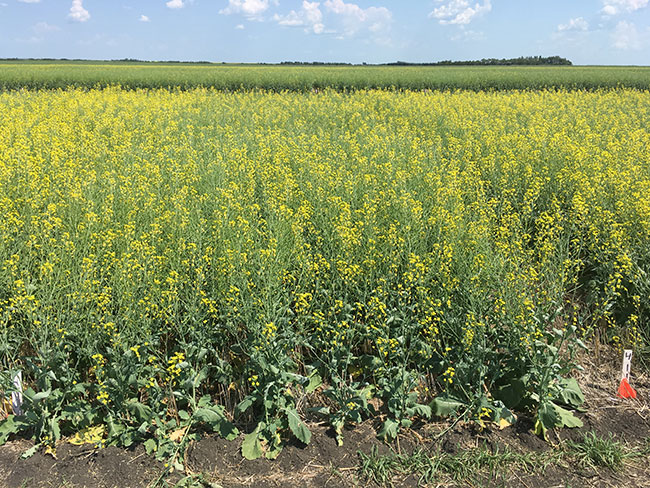 Seeding rates to optimize canola yield potential are influenced by various management and environmental factors. Research and industry are trying to address whether seed size and hybrid variety can influence the optimal seeding rate to achieve the recommended plant population density and maximize yield potential.

“Among canola hybrids, the average seed size varies significantly, and even among seed lots within hybrids,” explains Christiane Catellier, a research agronomist at Indian Head Agricultural Research Foundation (IHARF) in Saskatchewan. “The seed size also depends on the year, location and environmental conditions under which the hybrid seed was produced, something producers have little control over. To better understand whether seed size and/or hybrid has an effect on optimal seeding rate of canola, we conducted a one-year multi-site field trial in Saskatchewan in 2018, funded by SaskCanola.”

This small-plot field trial was conducted at five locations in Saskatchewan including Indian Head, Yorkton, Melfort, Scott and Outlook. The first objective was to verify the optimal seeding rate to achieve adequate plant populations and optimize yield under various environmental conditions in Saskatchewan. A second objective was to determine if seed size and/or hybrid had an effect on optimal seeding rate of canola. The trial compared various treatments, including two canola hybrids, InVigor L233P and Pioneer 45M35, two seed sizes of each commercial hybrid, either “small” or “large,” and three different seeding densities of five, 10, and 15 seeds per square foot (/ft2). The same four commercial seed lots were used at each of the five trial sites. Several factors were measured at each site, including spring plant density, maturity date, fall stubble density and seed yield.

The Canola Council of Canada recommendations are to seed canola at a sufficient rate to achieve a target spring plant density of five to eight plants/ft2 at emergence. When calculating the weight per area seeding rate required to achieve the recommended plant population, there are two important considerations: seed size given as test seed weight (TSW) and field emergence rate. Emergence is a measure of the percentage of seeds that actually grow into plants, and plant population is the number of plants per area.

“Generally, our trial results did show an effect of hybrid and seed size on different crop response variables, such as emergence rates, in-season mortality and maturity. However, that did not necessarily translate into an effect on crop yield,” Catellier says. “If emergence and survival rates had been lower, we might have expected a greater yield penalty resulting from less-than-adequate plant population at the lowest seeding rate. In terms of yield response, we did see quite a difference between hybrids. The yield results of 45M35 showed a higher yield overall with the larger sized seed, with optimum yield achieved at the moderate seeding rate of 10 seeds/ft2. However, with the L233P hybrid, there was no yield response to seeding rate or seed size, indicating that the hybrid effect overshadowed all of the other treatment effects. Therefore, the minimum or adequate plant population required to optimize yield differs among hybrids, and the effect of seed size may or may not be important depending on the hybrid.”

Plant density tended to be lower for small-seeded lots than large-seeded lots, regardless of hybrid. There was also a small effect of seed size on maturity, with the larger-sized seed maturing quicker than smaller-sized seed, but only at the highest seeding rate, and this did not appear to translate into yield benefits. Therefore, even with the benefit of early and even maturity with higher seeding rates, the most economic and least risky seeding rate would be closer to the moderate 10 seeds/ft2. Producers who can ensure a high emergence rate and are willing to assume the risk of potential in-season plant loss may be able to use slightly lower seeding rates.

“The scope of this project was limited to comparing the responses between two hybrids,” Catellier explains. “Our study did show differing responses between hybrids; however, it will be difficult to predict other hybrids’ precise response to seeding rate and seed size from these results. It is also difficult to know the precise emergence and mortality rates that can be expected in any environment. There, growers should continue to target the recommended seeding rate, which would be to seed canola at or near the moderate seeding rate of 10 seeds/ft2, and consider using larger seed lots or a slightly higher seeding density with relatively smaller seed lots. Growers are also encouraged to monitor emergence and/or survival rates on a field-by-field and yearly basis to be able to determine typical or expected rates for their operation and management system. Keeping track of emergence rate and any differences they see between hybrids and seed lots on their own farms is something that will help provide more information on the seed size effect.”

Catellier has another on-farm study underway to measure canola emergence rates in the Indian Head area. “We are working with farmer collaborators to collect management information, as well as several environmental factors such soil moisture and temperature,” she says. “We expect the results of this multivariate study conducted in commercial farm fields to be very insightful and show how management practices interact with environmental conditions and the effect on emergence. We just completed the third year of the study in 2020 and expect to have more results next year. The results from this and other studies will help growers to optimize seeding rates and canola yield in Saskatchewan.”