Features Insect Pests
A cut above the cutworms below

Cutworms are no stranger to the Prairies – these native insects have been causing sporadic but significant damage to crops since the early 1900s. But after more than a century of advancements in agriculture, we still don’t have a concrete solution for effectively managing cutworms on a consistent basis. A solid integrated pest management (IPM) plan requires thorough knowledge of the target pest but, for cutworms, a lot of this information was lacking. This is perhaps surprising, considering the long-standing pest status of cutworms.

Maya Evenden, professor in the biological sciences department at the University of Alberta, identified some key cutworm research gaps.

“For cutworms, there has been a lot of basic biology work and research on pheromone identification, but this is relatively old research from the 1970s and 1980s. As cropping systems and varieties change along with our changing climate, we will likely see a shift in plant-insect interactions between crops and cutworms. That is why we studied the effect of host plant species and the fertilization regime on cutworm performance and preference,” she says.

Ronald Batallas, now a science instructor and invertebrate lab co-ordinator in the University of Alberta’s Biological Sciences Department, investigated cutworm-host plant interactions for his PhD thesis. Batallas selected two cutworm species, the redbacked cutworm (RBC) and the pale western cutworm (PWC), both common agricultural pests on the Prairies. He conducted three laboratory experiments to (1) measure larval performance (how capable a larva is in reaching its maximum growth potential) on three different host plant species (canola, spring wheat, and field peas) in a no-choice scenario; (2) determine larval feeding preference between these crops in a choice scenario; and (3) determine if fertilizer alters the suitability of the host crop (canola and wheat) for either cutworm species.

PWC has low survivability on field pea
In the no-choice experiment, RBC larvae were less influenced by the specific host crop; more than 87 per cent of larvae successfully reached pupation when fed canola, wheat, or peas. On the contrary, PWC larvae were very responsive to the host crop – larvae reared on wheat had 88 per cent survival, followed by canola at 66 per cent survival. Only 22 per cent of larvae reared on field pea were able to reach pupation.

As a measure of reproductive fitness (the ability to reach the adult stage and produce offspring), the pupae reared from each host crop were weighed and compared based on sex. For RBC, the ranking of female pupal weights was canola = peas > wheat; in other words, canola and pea were roughly equal, and both were preferred over wheat. No difference was observed in the males. For PWC, both female and male pupal weights were ranked wheat > peas > canola.

“These results show that RBC larvae raised on canola or peas and PWC larvae raised on wheat may have higher reproductive capabilities, so the crop species they develop on could influence the cutworm population density in the field,” Batallas explains

Different cutworm species prefer different foods, and perform better when they can feed on their favourites
Redbacked and pale western cutworms are generalist feeders, consuming many different plant species in order to survive. But that doesn’t mean they don’t have their favourite foods to eat. In the choice experiments, where the larvae had equal access to all three host crops, both cutworm species showed clear feeding preferences. Redbacked cutworm larvae consumed the most canola plant mass, followed by wheat and then peas. Pale western cutworm larvae consumed significantly higher wheat biomass compared to canola and peas.

“Egg-laying by the adult female moths of these two species is done in the loose, dry soil in the late summer and early fall. There is no evidence that these moths show a preference to a specific crop when laying eggs. Yet, their larvae clearly do have a feeding preference between host plants, so our results suggest that the larvae have a more active role in host selection than the adults,” Batallas says.

One of the questions Batallas had for this project was if the host plant selection by the larvae in the choice experiment matched the larval performance results from the no-choice experiment – and it did. Overall, canola and peas were the most suitable host crops for RBC and spring wheat was the most suitable host for PWC. Due to poor larval survival, field peas were deemed to be an unsuitable host for PWC, raising the thought of using crop rotation as a potential management strategy.

“It’s possible that a cereal-pea crop rotation could help reduce pest density buildup of PWC, although it’s hard to say if a single year break with peas would be a long enough time to effectively reduce numbers. Because the females lay eggs after the crops are harvested, when the larvae hatch they are initially stuck with whatever host is planted. If peas are planted, they would not be expected to do very well, so a one-year rotation might be good following a cereal field that was infested. However, the adults are very good fliers and there is no guarantee that females will lay eggs in the same field from which they emerge,” Evenden clarifies. 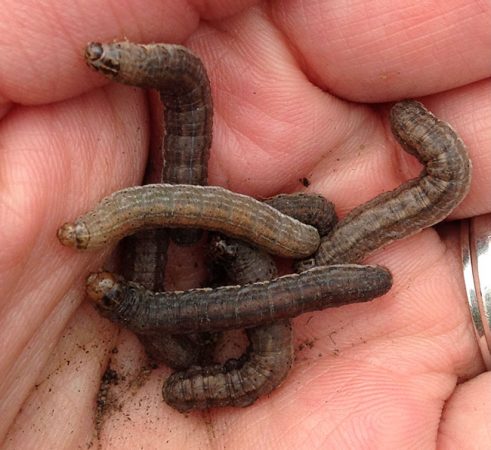 Redbacked cutworms develop the best on canola and field pea.

Fertility matters: healthy crops = healthy cutworms
To study the effect of fertilizer on host crop suitability, Batallas used a liquid NPK fertilizer blend of rates similar to what would be used in commercial field production, compared to an unfertilized treatment. As a result, the fertilizer increased the nutritive qualities of canola and wheat, thereby improving the performance of both RBC and PWC. Specifically, Batallas noted that female RBC larvae fed canola had higher pupal weights than those fed wheat, suggesting that female RBC could be more reproductively fit under a well-fertilized canola crop.

Comparing the developmental time from larval to pupal stages, there were again differences between the two cutworm species. Redbacked cutworm larvae were more responsive to fertility – their larvae developed faster on fertilized seedlings compared to unfertilized seedlings, regardless of the crop species. Conversely, PWC larvae were more influenced by the actual crop species, developing faster on wheat seedlings compared to canola seedlings, regardless if they were fertilized or not. This is likely due to PWC having a special adaptation to the hot, dry summers typical of the southern Prairies. This cutworm species has a “prolonged prepupal phase,” meaning that it spends an extra-long time in its final larval stage before pupating, in order to delay the emergence of the moths until conditions are more favourable for egg-laying. Full-grown PWC larvae burrow deeper in the soil, so reaching the final larval stage faster reduces their exposure to predators or parasites.

IPM plan for cutworms still needs work
Newer seed treatments have helped to provide protection in canola, if the seed was proactively ordered with the specific treatment prior to planting. Insecticides impart a generally acceptable level of control but remain a reactive solution that can have negative implications for beneficial insects, depending on the product used. Evenden suggests the promotion of natural enemies (parasitic wasps, ground beetle predators, tachinid and bombyliid fly parasitoids) in a conservation biological control approach might be one of the best IPM measures a grower could currently implement. For example, allowing diverse field boundaries along roadsides or fence lines to remain undisturbed provides critical habitat for natural enemies to survive in. Diligent scouting to catch cutworm patches appearing in the field may mean that spot-spraying will suffice, as opposed to the more economically and/or biologically costly whole-field spraying. Economic threshold guidelines should be followed in order to minimize unnecessary insecticide applications.


Related
Scouting for cutworms: how to identify and what you should know
Identification and management of cutworms made easy
Flea beetles and cutworms found in Manitoba fields
Developing IPM strategies for cutworm