A University of Manitoba study is generating some surprising results about soil temperatures and soybean planting dates. 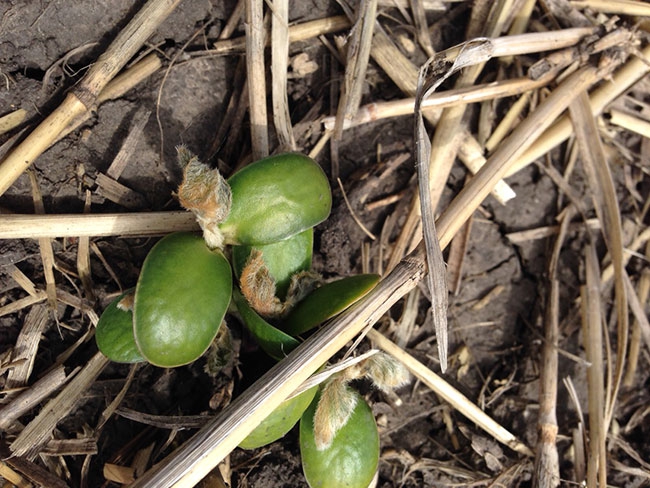 A killing spring frost in Morden in 2015 affected the plots where plants had emerged by the time of the frost. Affected plots were those with the earliest planting dates. ome surprising results about soil temperatures and soybean planting dates

Yvonne Lawley, a professor of agronomy and cropping systems at the University of Manitoba, initiated this two-year study to help develop soybean planting date recommendations suited to Manitoba conditions.

“Manitoba is in the middle of a large expansion of soybean acres. In 2013, we had just reached one million acres of soybeans in Manitoba, and now in 2016 we are over 1.5 million acres,” she explains. So more and more growers are asking soybean agronomy questions, including planting date questions.

“Some growers are trying soybeans for the first time, but many growers are expanding their acreage of soybeans so they can’t necessarily plant all of their soybean acres in just one or two days. The question of when to plant is very important because of our short growing season in Manitoba.”

Soybean growers want to find that sweet spot between planting too early and planting too late. They need a long enough growing window for the soybeans to mature, so they want to plant as early as possible. But they don’t want to plant so early that spring frost damage destroys or sets back the crop. Plus, planting into cold soils is associated with reduced emergence and an increased risk of certain soil-borne diseases.

Lawley and her graduate student, Cassandra Tkachuk, conducted the field study to evaluate one of the indicators used for planting date decisions. “Our objective was to identify if the current recommendation of planting soybeans when the soil temperature is at least 10 C would result in the highest yields or the best emergence of soybeans in Manitoba,” Lawley says.

That 10 C recommendation is based on some studies showing cold soil temperatures at planting time can cause chilling injury to soybean seeds. For example, an Ontario study found soybeans planted in soil kept at 7 C for the first 20 hours after planting had very poor emergence. Also, if soybean seeds imbibe very cold water during the first 24 hours after seeding, the result can be reduced emergence and poor seedling vigour.

Lawley says, “When we plotted the days-to-emergence data from the three 2015 site years, we had two distinct groups in the datasets. We called them our cool group and our warm group.” The cool group plots were seeded between actual soil temperatures of 6 C and 12 C and took roughly three to four weeks to emerge. The warm group plots were seeded between 14 C and 22 C and emerged within a week.

So despite the cold soil temperatures and very slow emergence, the highest yields were for the earliest planting dates.

“That completely surprised us,” Lawley says. “If I were a betting person, I would have put money on an optimum mid-May planting date having higher soybean yields than planting at the end of April.”

With only two site-years of yield data, Lawley and Tkachuk can’t draw any final conclusions from these limited results. But they emphasize the importance of confirming these planting date trends at Carman and determining if similar trends occur across the rest of Manitoba’s soybean-growing region.

When the yields at Carman are plotted against soil temperature at planting, you get a scattering of data points with no strong trend up or down for most of the treatments. Only with the highest soil temperatures – when the planting dates had moved into June – did the yield trend downward.

“A take-home message from this study is that growers may have a wider range of optimal seeding dates than we had thought at the start of the study. Where we didn’t see a yield response to soil temperature at planting, we also didn’t see a sharp yield response to calendar date. We saw equivalent soybean yields throughout the entire month of May. It was only when the planting dates got into June did yields dramatically decline,” Lawley says.

A killing spring frost in Morden in 2015 affected the plots where plants had emerged by the time of the frost. Affected plots were those with the earliest planting dates.

Tkachuk adds, “One of the important findings of this study is that calendar date probably had a greater effect on yields than soil temperature at planting.”

Another surprising result was that there were no significant differences between the early and mid-season soybean varieties in terms of days to emergence and yield.

The results also point to the need to determine the key indicators for soybean planting date decisions in Manitoba. “Another take-home from our study is that soil temperature alone probably is not going to give us the best decision-making guide for soybean planting dates. We need to continue to evaluate what other factors should be guiding growers’ decisions,” Lawley says. “One of the factors we were thinking about at the start of this study was chilling injury of soybeans. But is chilling injury the most important limitation for soybeans in a very short growing-season environment, or is it just the short growing season itself?”

With a very short growing season, there are serious risks of crop damage due to late spring frosts and early fall frosts. In this study, although very early planting resulted in higher yields, it also increased the risk of spring frost damage. Two sites in the study had a spring frost event: Carman and Morden, both in 2015. The only affected plots were the ones that had emerged by the time of the frost, which were the plots with the four earliest planting dates at Morden and the plots with the three earliest planting dates at Carman.

Carman had a much milder frost than Morden. “Although plants were damaged at Carman, the plants continued to grow through the frost damage,” Tkachuk says. “There was ultimately no effect [from] frost at Carman on the plant stands established.”

However at Morden, the frost caused plant deaths and resulted in reduced stands. Tkachuk says, “Initially, looking at the data, you might conclude that the low soil temperatures from the first four planting dates at Morden had affected the established plant stand, but really it was the frost.”

So perhaps the probability of a killing spring frost is a more critical planting date indicator than soil temperature. “This study is showing us that there is some reason to plant early, but farmers have to decide how willing they are to live with the risk of frost. I think that is going to be one of the biggest trade-offs,” Lawley says. “We were surprised by the study’s results. We’re excited that we’ve learned something new, but we have more to learn before we can make clear production recommendations.”

The Western Grains Research Foundation and Growing Forward 2, through Agriculture and Agri-Food Canada (AAFC), funded the study. Research was conducted in collaboration with Scott Chalmers at the Westman Agricultural Diversification Organization in Melita, Man., and with Anfu Hou at AAFC’s Morden Research and Development Centre.


Related
The factors of soybean planting decisions
The best planting dates and soil temperatures for seeding soybeans
To disc or not to disc?
Ideal temperatures