Features Agronomy Tillage
To disc or not to disc?

"A lot of Manitoba soybean growers are using tillage to try to extend their growing season by warming up and drying out their soils earlier in the spring. They want to be able to plant earlier so their soybeans will have a good chance of maturing before a fall frost arrives,” says Yvonne Lawley, a professor of agronomy and cropping systems at the University of Manitoba. 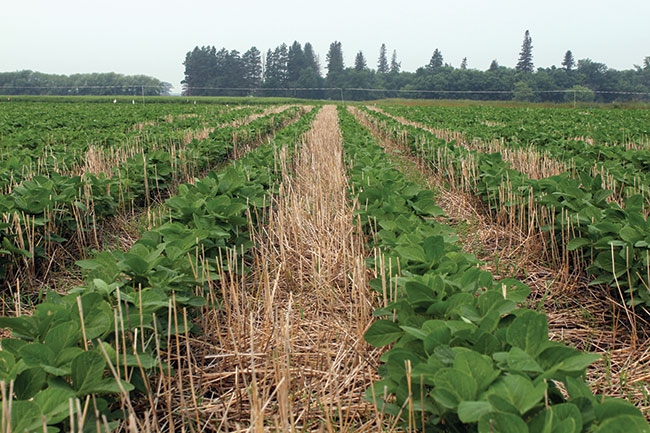 The project’s tall stubble treatment produced soybean yields that were as good as or better than the disc treatment. A lot of Manitoba soybean growers are using tillage

But tillage costs growers time and money and increases the risk of soil erosion. So, she explains, “Our research question was: do farmers need to use tillage to grow soybeans well in Manitoba?”

To answer this question, Lawley and her graduate student, Greg Bartley, conducted a two-year field project. They chose wheat for the crop before soybeans because this is a common rotational sequence in the province. They set up five different residue treatments in the fall, then planted soybeans the following spring. Soybeans were grown in 2014 and 2015.

“The control treatment was the conventional tillage practice [for this region], where we disced the soil in the fall and the spring to make the soil as black as possible,” says Bartley, who is currently finishing his master’s thesis and is also the On-Farm Network co-ordinator for the Manitoba Pulse & Soybean Growers. “We had two no-till treatments: a short stubble that was about 15 centimetres high, and a tall stubble that was about 40 centimetres high. We also had a strip till treatment. We tilled strips about [10 to 15 centimetres wide] where the soybeans would be planted, and the rest of the field was left undisturbed.”

“The final treatment was a fall rye cover crop. We planted fall rye in the fall and let it establish in the spring. We planted soybeans straight into that living fall rye crop and then we sprayed out the rye right after planting.”

The project took place in Carman, Man. At that location, the soils are managed conventionally, so the no-till treatments had less thatch than would be typical in fields under long-term no-till systems.

The project team followed the current recommendation to plant soybeans when the average soil temperature is at least 10 C; they waited to plant until about the third week of May when all the treatments were above that temperature.

In 2014, they used a disc drill that had little ability to seed through crop residue. In 2015, they opted to use a planter with good residue capabilities.

The team collected data on a number of factors, such as soil temperature, amount of residue ground cover, soybean emergence and final plant stands, and soybean yields.

“The soil temperature differences between the treatments weren’t as big as I would have expected,” Bartley says. “The black part of the strip till treatment had the highest daytime temperatures, about a degree or two higher than the next warmest treatment, which was the conventional disc tillage.”

Lawley thinks the tilled strips had the highest daytime temperatures because of the way the strip till unit worked and shaped the soil. “Strip tillage is very intensive with the unit we were using, so we had a black, fluffy, warm seedbed. Also the strip till unit creates a berm that catches the sun, which may have also made the strips warm up faster, compared to a flat surface.”

The team found the soil temperatures in the tall stubble treatment were very similar to those in the disc treatment. In contrast, the short stubble treatments had cooler daytime soil temperatures that were similar to those in the undisturbed, residue-covered parts of the strip till treatment. That’s because when stubble is cut shorter, more straw will be laying on the soil surface, creating a residue blanket that slows soil warming.

With soil temperatures above 10 C at planting, soybean emergence was good. Bartley says, “All the soybeans emerged relatively quickly and there was little difference in emergence between the different treatments.” For example, in 2015, at 10 days after planting, there were some differences in emergence, with the strip till treatment having the highest emergence and the short stubble the lowest. About a week later, the plant stands in all the treatments were very similar.

A key factor influencing soybean emergence and final plant stands was the type of planting equipment used. “In 2014, when we didn’t have a seeder that could cut through residue or handle residue very well, we saw a reduction in the soybean stand in the living fall rye treatment, but not in either of the stubble treatments,” Lawley says. “In 2015, when we had a planter that could handle planting into residue, our final plant stand counts were the same in all the treatments – even the cover crop treatment, which had the most residue.”

Soybean yields in 2014 were fairly similar for most of the treatments: the strip till and tall stubble treatments each yielded 39 bushels/acre (bu/ac), the discing treatment yielded 35 bu/ac, and the short stubble treatment yielded 34 bu/ac. The exception was the fall rye treatment, which had a significantly lower yield of 29 bu/ac. “In 2014, when the plant stand count was lower in the fall rye treatment, we also saw a yield hit in that treatment,” Bartley says. “However, in 2015, when we used that planter [that could handle residue] and got good stands in all the treatments, there were no differences in soybean yields. All the treatments had between 53 and 54 bushels per acre.”

The project’s tall stubble treatment produced soybean yields that were as good as or better than the disc treatment.

What the results mean for growers
“Our findings show you can plant soybeans without tillage, but you need to think about leaving the wheat stubble taller,” Lawley says. “Our findings also point to strip tillage as a possible fit for some growers. If you’re not comfortable with the straw residue, then strip tillage may be a good compromise because you have tillage in that row for planting soybeans and you also have residue where it’s needed to protect the soil.”

“We also learned that the planter itself is very important, especially if you’re working in higher residue environments,” she added. The planter needs to operate effectively for the field’s residue conditions.

The project was funded by the Western Grains Research Foundation, Growing Forward 2 and the Manitoba Pulse & Soybean Growers, and Bartley received a scholarship from the Natural Sciences and Engineering Research Council of Canada.

Next steps
Lawley sees two important next steps for this research. “One is that we need to take this experiment to western Manitoba, into areas that have been in no-till production for many years and have more thatch than the soils at Carman. In those areas, the use of tillage before soybeans is a more pressing issue in terms of the long-term sustainability of the cropping system,” she says.

“The other step is to look at early versus the ideal planting date in these treatments. We started working on this in 2016 at Carman and we will repeat the experiment in 2017. In 2016, we took the three top treatments [from Bartley’s project] – the strip till, tall stubble and discing treatments – and looked at early and late planting of soybeans in those three treatments.”

Other studies by Lawley’s group are indicating early planting dates could result in higher soybean yields in Manitoba, even when soil temperatures at planting are as cool as 6 C. So, early planting could be a better choice for growers.

It may also be that early planting might result in some soybean yield differences between the three wheat residue treatments.

Lawley is also hoping to do more work on options for seeding soybeans into a fall rye cover crop, like strip tilling of the cover crop.

“I would like to look at whether we can overcome some of the challenges we see with giving soybean plants enough time and space to establish within the cover crop.”


Related
Ideal temperatures
Strip till in soybeans
Managing phosphorus and zinc in corn
Till or no-till after soybeans?