In 2016, soybean production in Manitoba reached a high of 1.6 million acres. This significant increase is partly due to the introduction of early-maturing soybean varieties that have expanded production to “non-traditional” growing areas. However, frost and near-freezing temperatures in spring and fall still remain a risk for soybean growers in Manitoba. 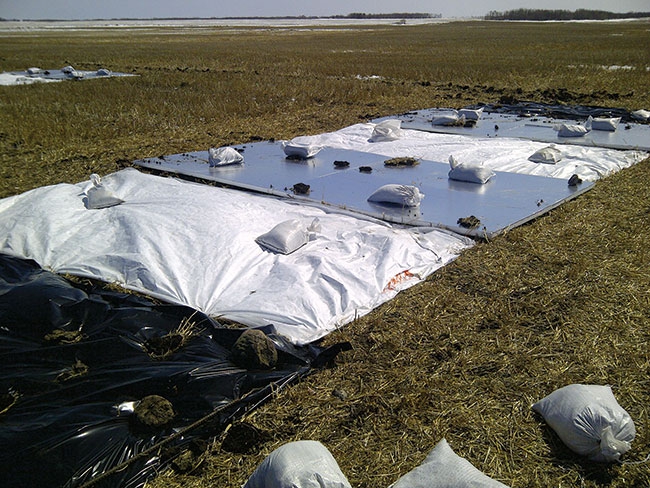 Research plots with the various soil coverings used to create different soil temperatures in the spring. In 2016

Researchers in the province initiated a four-year project in the spring of 2014 to find out if there were management practices that could be used to help reduce the risk associated with frost and/or near-freezing conditions. “We were interested in looking at management practices that might affect soil temperature conditions and plant growth early in the growing season,” says Ramona Mohr, a research scientist with Agriculture and Agri-Food Canada’s Brandon Research and Development Centre. The project was conducted with partners at four sites in Manitoba, including Brandon, Roblin, Portage and Carberry.

The study includes a comparison of the effect of three soil temperature treatments at two different planting dates on soybean growth, yield and quality over three growing seasons beginning in 2014. Researchers also compared the effects of a range of residue management practices on soil temperature and other factors, including plant stand, soybean yield and soybean quality. These plots were established in the fall of 2014 at each location to set up the trials for comparison of preceding crop and residue practices. The residue management trials included comparisons of a tilled control plot treatment and three different standing stubble treatments of wheat, oat or canola. For wheat and oat, standing stubble was retained on the plot and straw was either chopped and returned, or removed. For canola, standing stubble was retained on the plot and the straw was chopped and returned.

“We have some early preliminary results from 2015, however data from the 2016 soybean crop is not yet available as harvest was not completed as of early October,” Mohr says. “Based on preliminary data from 2015, delaying seeding from later May to early June often reduced the number of days between planting and crop emergence and reduced yield at two of four sites, but had limited effects on seed quality.”

The residue management trials in 2015 also showed some interesting early results, with soil temperatures at seeding 1 C to 3 C higher on plots where straw had been removed from the standing stubble. The tilled control treatment also tended to increase the soil temperatures compared to the untilled treatments. “However, although we saw these soil temperature differences at the time of seeding, by the end of growing season, effects on plant stand, soybean yield and soybean quality were limited,” Mohr says. “So even though residue management influenced soil temperature at seeding, it didn’t carry through to yield in 2015. It is important to note, however, that in 2015 at the time of seeding all of the sites had soil temperatures higher than the minimum critical temperature of 10 C, which may also have affected the outcomes.” Researchers are also trying to address the question of oat residue and its effects, and collect data to support anecdotal information suggesting oat residue might reflect more light, creating cooler soil conditions due to its lighter colour.

The project will continue for one more growing season in 2017, after which researchers expect to have a better understanding of the results of the various treatments. “We will be able to compare three years of data and determine how consistent the differences were across the different sites and years,” Mohr says. “Once we have the final project results we hope to be able to provide growers with information as to whether preceding crop and residue management matters or not for maximizing early growth, quality and yield for soybean. We expect the final project results to show if there are consistent differences among the types of residue and residue management practices and what the impact will be on the following soybean crop.” Final project results are expected to be available in early 2018.


Related
Ideal conditions for soybeans
The best planting dates and soil temperatures for seeding soybeans
To disc or not to disc?
Dating decisions