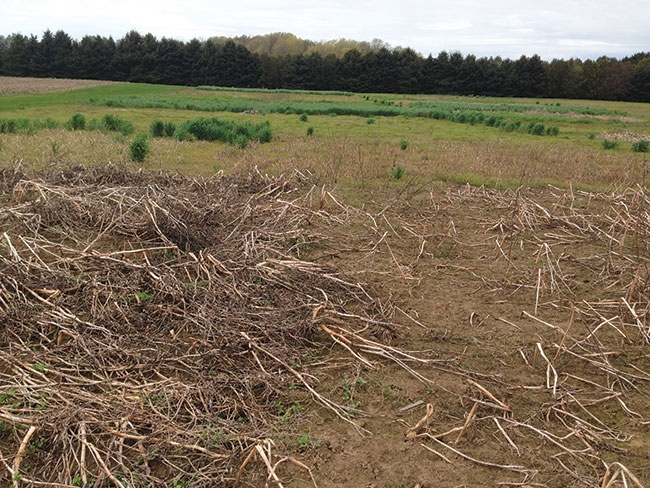 The number of farms using winter cover crops in Ontario nearly doubled between 2011 and 2016, according to provincial data from Statistics Canada’s latest Census of Agriculture, released earlier this year. Interpreting census numbers is a matter of some debate, but there are other indicators pointing to the growing popularity of cover cropping – such as attendance at agronomy events on the topic and on-the-ground observations.

Peter Johnson, Real Agriculture agronomist and program co-chair for the Southwest Agricultural Conference (SWAC), says about 1,400 people attend concurrent sessions over the conference’s two-day program, held in early January each year at the University of Guelph’s Ridgetown campus. The conference sessions are held in rooms with capacities ranging from 110 to 600 people. Johnson chooses which talks will be held in which rooms.

“We knew cover crops were ramping up three years ago, but I missed that in my room assignments. Rooms were overflowing and we had to turn people away from the cover crop topics,” Johnson says. “That was an eye-opener for me. The interest was much bigger than I realized.”

For this year’s SWAC conference, he placed the cover crop sessions in some of the largest rooms, with the soil organic matter session in the largest room of all. Once again, the rooms were at capacity.

“It looks like we will continue on that road for 2018. Soil health and cover crops go hand-in-hand. It continues to be a hot topic, and we will continue to meet that demand. Hopefully the interest continues, because it’s something that growers need to focus on,” he says.

The SWAC celebrates its 25th anniversary in 2018 and has welcomed a new generation of attendees since Johnson began his agricultural extension career 33 years ago.

“In my career, this is the third time cover crops have cycled. There is much more interest this cycle, with renewed interest in soil health and organic matter. Growers understand that they have to look after their soils better to achieve significant gains in crop yields,” he says.

Cover cropped acres on the rise

Ontario farmers have a wide window of opportunity to use cover crops, especially after the winter wheat harvest in mid-summer.

“It used to be that we would struggle to get a third of the [winter] wheat acres seeded with red clover. My guess now would be that at least three-quarters of the wheat acres have cover crops planted after wheat,” Johnson says.

But the uptick in interest has spurred research.

In recent trials, short-term results show corn can gain a nitrogen credit from red clover and other legume cover crops because the timing of nitrogen release from the legume is right when the corn needs it.

“With other [non-legume] cover crops, our research shows more nitrogen is available to the following crop. With corn, the plant sees more, but it’s not enough to lower your nitrogen fertilizer rates. And timing the release of nitrogen from the cover crop to the corn is very important,” says Laura Van Eerd, associate professor in the School of Environmental Sciences at the University of Guelph’s Ridgetown campus.

After a corn or soybean harvest, it’s too late in the season to plant a cover crop (other than cereal rye) and gain a payback in biomass before freeze-up.

But there are still opportunities to plant cover crops with corn, thanks to its wide row spacing and the rise in precision agriculture techniques. University of Guelph researchers David Hooker and Bill Deen, in collaboration with Van Eerd, have evaluated a precision planter that can interseed three rows of cover crop seed during the V6 stage of corn planted on 30-inch rows.

The main limitation in field corn is lack of sunlight. If red clover can get to a decent level of growth before the corn canopy closes, it tends to go dormant. Later, when the corn leaves are drying down, more sunlight is available and the red clover may come back.

“It works, but it’s not an easy system,” Van Eerd says.

She’s demonstrated that the system works very well with seed corn production, as more light is available after tassels are taken off the plants. Interseeding can also work with silage corn, if the silage is off in early September.

Van Eerd participated in two of the 2017 SWAC cover crop presentations and has conducted long-term research in cover crops, soil health and nitrogen fertility. After 10 years of seeding the same plots with cover crops and comparing yields to adjacent plots without cover crops, one clear trend has emerged.

“We’ve seeded 122 cover crops. In 121 times, our following crop yield has been as good as or better with than without a cover crop. It’s not always statistically better, but only once was it statistically worse,” she says. “That ‘once’ was because we were preparing for tomatoes the following year and we had spring wheat after cereal rye. That’s a bad rotation to begin with.”

In the early years of the long-term trials, the focus was on minimizing nitrogen losses. More recently, Van Eerd has been looking at cover crop influence on soil health.

For instance, where her team has planted oilseed radish and cereal rye mixture in the fall for 10 years, they measured a real increase in soil organic matter. Plots with cover crops had 3.5 to 3.6 per cent soil organic carbon, but plots without a cover crop had levels of 3.2 per cent.

“The change is slow, but it is doable,” she says. “Crops are responding to the cover crop, and we’re seeing differences in the soil itself.”

Farmers who have been thinking about trying cover crops in recent years will find there have been major increases in the number of resources available since the 2011 Census of Agriculture, says Anne Verhallen, a soil management specialist with the Ontario Ministry of Agriculture, Food and Rural Affairs (OMAFRA). Verhallen maintains a database of cover crop seeds and seed suppliers. She is also an editor of OMAFRA’s best management practice (BMP) for soil health series (omafra.gov.on.ca/english/crops/facts/cover_crops01/covercrops.htm).

In response to the increased interest in cover crops, OMAFRA has published four new editions of BMPs for soil health since 2016. The series to date includes: cover crops and manure; interseeding cover crops; preplanned cover crops; and winter cover crops. The booklets are in segments for specific production systems, rather than a single large manual. In addition to new research, they collect older information that has been scattered in the literature and online.

A typical soil management BMP guide could be 60 to 70 pages. But OMAFRA’s booklets range from 10 to 20 pages. They have large pictures and are easy to read, so growers can better understand what’s going on in their soils and in plant roots when they use a cover crop.

Verhallen is also Ontario’s only representative on the 10-year-old Midwest Cover Crop Council (MCCC) executive in the United States. The council is actively producing print and digital resources (including fact sheets, online decision tools, applications, etc.) for those who want to dig deeper. (More information is available at mccc.msu.edu/.) For instance, the MCCC online decision tool allows a grower to select cover crops based on goals and climate and provides additional agronomic information for managing that cover crop.

The MCCC published the second edition of its Cover Crops Field Guide in 2014 with significant content from Ontario.

As a land use, growers will find challenges and benefits from cover crops.

And that, according to Johnson, is why SWAC 2018 will include programming about new cover crop information in order to address the questions growers have about the practice and share what new research has found.

What the ‘big data’ says

Cover crop science and reality,” one of the sessions at the 2017 Southwest Agricultural Conference in Ridgetown, Ont., asked a basic question: why plant cover crops?

Farmers at the session had many answers to the question – typical reasons given included the fact that it’s good for the soil, good for microbes, good for erosion control, good for weed control and good for crop nutrition and phosphorus levels. But these were not what a “big data” analysis, conducted by AnaÏs Charles and Anne Vanasse of Université Laval with collaboration by Laura Van Eerd, showed after reviewing more than 2,400 paired data points.

The analysis drew on published reports from journals, as well as reported field trials collected in Ontario and in places with a similar climate. It compared yields with and without cover crops from the 2,400 data points.

“No one said yield was the main motive for planting the cover crop, but the analysis showed you can get yield boosts with the cover crop,”  Van Eerd says.

While the analysis showed a yield benefit to cover cropping, she admits the benefit of a cover crop is not always tangible. It costs in seed and time to plant and it doesn’t always give an immediate, direct benefit.

“It is an extra level of management. Without a guaranteed benefit, that’s a barrier. The main time farmers can see a benefit is when there’s a windstorm. Your land isn’t blowing but the neighbour’s is, so you see that benefit.”