There’s no doubt cover crops provide an abundance of benefits for producers, including boosting soil health and improving crop performance. However, not all cover crops are created equally, especially when it comes to ensuring cover crops don’t become a weed in crop rotations. 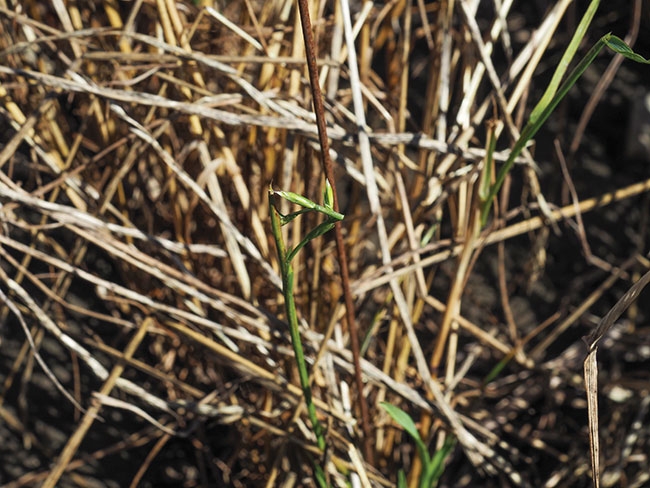 Glyphosate plus Eragon were sprayed at this plot on May 29. As of July 7 Proper termination of cover crops is critical to subsequent crop success.

Annual ryegrass is one of those cover crops. Kris McNaughton, a researcher at the University of Guelph in Ridgetown, Ont., says there are many reasons producers might choose annual ryegrass as a cover crop to overwinter.

“You can plant it early in the fall following a wheat crop and, if you get a good rain, it will establish quickly, develop a good fibrous root system that will hold soil over winter and help prevent erosion,” she says. “It’s also a good nitrogen scavenger.”

That said, she adds it can be problematic because it is challenging to kill the next spring.

“If you’re going to overwinter annual ryegrass, you need to kill it before you plant your next crop,” McNaughton says, explaining the best they were able to achieve in their research trials was a 95 to 96 per cent kill and that was with aggressive management. “It basically becomes a weed in the spring. It can develop 500 to 1,000 seeds and has a strong ability to develop resistance.”

Termination
There are a number of methods producers can use to terminate their cover crops, including winterkill, mechanical methods and herbicides. However, with annual ryegrass, McNaughton says none will be 100 per cent effective.

“Tillage can help control but you need to be prepared that you are still going to be spraying with Roundup and tank mix with a Group 1 herbicide,” she adds, explaining in some of their trials on timing to kill with glyphosate, they still had three plants survive, and as many as 50 per cent came up if there was a timely rain to cause regrowth.

While herbicides are the best option for terminating annual ryegrass, timing is critical. McNaughton recommends applying as early in the spring as you can, although there will still be regrowth.

“We applied on April 26 at the eight-inch stage just before first node as recommended and we needed a high rate, 1,800 grams of active ingredient per hectare, and we still needed to tank mix with another mode of action,” she says. “You need to make sure it’s dead. We find the base of the plant doesn’t die off.”

Glyphosate plus Eragon were sprayed at this plot on May 29. As of July 7

Other options
McNaughton says cereal rye is a better option for a cover crop if a producer is looking to add overwintering. This is because it has advantages similar to annual ryegrass but is easier to terminate in the spring with lower rates of glyphosate alone.

“We can kill it with a mid-rate glyphosate application at 1,350 grams of active ingredient per hectare,” she says. “That rate will kill and there won’t be any regrowth.”

Cereal rye is not as set on timing either.

“When you apply depends on how much residue you want left in the field when you plant,” McNaughton says. “It will depend on your planter; if your planter can handle more residue then you can terminate the cereal rye later in the spring and closer to when you will be planting your crop.”

“It naturally suppresses weeds we want to control later on,” McNaughton says.

One example of this is trials in Oxford County and Norfolk County, where researchers looked at different management practices to control Canada fleabane. They saw no Canada fleabane growing anywhere they planted cereal rye in the fall. This was regardless of herbicide or tillage treatment they also used.

Other options include red clover and crimson clover. Both overwinter well, are efficient nitrogen fixers, improve soil health and protect against erosion.

But, says McNaughton, there are still some issues with killing. “You get better control if you spray early and tank mix the glyphosate with a Group 4 herbicide like dicamba.”

“Annual ryegrass is a better fit if you’re interseeding between corn rows mid-season,” she says, explaining this is because it handles shading better than several cover crops. As a result, it will survive between the corn crop rows and still develop a root system that will help amend the soil. “It tends to produce fewer seeds with the corn shading so you don’t see the return to the soil seed bank.”


Related
Winter wheat and cover crops for improved soil health
Archive: Cover crop best practices: what to plant and how to get rid of it
Cover your ground – and a lot more – between crops
Finding the right cover crop