A professor in the University of Guelph’s school of environmental sciences says producers should know their goals and set realistic expectations for cover cropping systems. 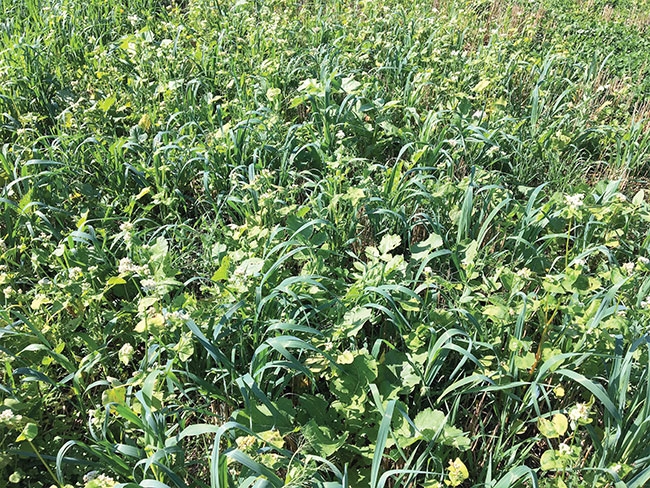 A 10-way cover crop mixture planted after wheat in Bill Deen and David Hooker’s study. Interest in cover crops is increasing despite the extra management requirements for producers.

Laura Van Eerd, who studies vegetable-grain cover cropping systems, says producers should ask themselves why they are planting cover crops and how they will manage them in order to see maximum benefits.

In Ontario, the use of cover crops went up from roughly 12 per cent in 2011 to about 25 per cent in 2016 across the agriculture sector, according to Statistics Canada’s long-form census. Clearly, producers’ interest in cover crops is increasing despite the increased management requirements that go hand-in-hand with the practice.

“There’s growing evidence that suggests over the long term, cover crops boost productivity,” Van Eerd says. “The caveat is that there’s immediate time and cost constraints, so that is something producers have to balance.”

In Ontario, vegetable and field crop producers alike use cover crops for a range of reasons, including protecting soil from erosion, maintaining a green cover in the “shoulder seasons” prior to planting and after main crop harvest, and sequestering nitrogen for subsequent plantings and lowering fertilizer costs.

But a producer’s reasons for planting cover crops dictate the type of cover crops they use. If a producer’s goal is to maintain or increase soil health, they’ll want to select a cover crop that will give them maximum biomass, says Van Eerd. If the goal is to have a living crop all year long, biomass isn’t as important, but rather the fact that living roots are feeding microbial communities.

Van Eerd has been running a long-term cover crop trial since 2007 in which a cover crop has been planted six times prior to soil sampling. She says soil health and soil organic matter levels have measurably improved with use of cover crops over that time, and yields have increased in vegetable crops.

“That is huge,” she says. “It’s not a lifetime, and we can show statistical improvements.”

Fitting cover crops into corn-soybean rotations
Bill Deen, a professor in the University of Guelph’s department of plant agriculture, has been running long-term cover cropping trials at sites in Elora and Ridgetown with researcher David Hooker for several years.

He says field crop producers are interested in fitting cover crop rotations into corn/soybean rotations, in part due to a growing realization that there are agronomic, environmental and soil health concerns in this rotation compared to more complex rotations.

“Our trials at Elora and Ridgetown quite clearly demonstrate that when you’ve got a corn-soy rotation or a soybean intensive rotation, these rotations consistently have the lowest measures of soil health, the lowest soil organic matter and other problems,” he says.

He says these rotations likely score the lowest because they have the least amount of soil organic matter. Cover crops can theoretically add biomass to corn-soy systems.

But because both corn and soybean are long-season, competitive crops, it can be a challenge to get much biomass from cover crops.

“Growers are still interested in exploring this but the reality is that adoption of that practice is minimal to date,” he says.

What looks more promising for cover crop use is a corn-soy-wheat rotation, in which the cover crop is planted following wheat. Wheat already adds significant benefits to the rotation, says Deen, and the addition of a cover crop enhances that benefit.

In addition, corn-soy systems tend to be tillage-intensive, which makes it challenging to add a cover crop; but reduced-tillage is more effective when wheat is added to the rotation.

Of the cover crop options Deen and Hooker will study, Deen is most optimistic about oats in terms of its potential appeal for producers.

Many producers believe that only cover crop mixtures produce any real benefit, says Deen, and though mixtures do result in more stable biomass, this also imposes management challenges that are hard to accept.

“By contrast, oats is relatively inexpensive, easy to establish, has good biomass potential in the fall, winterkills, and in the spring there isn’t much residue – it has a lot of benefits,” Deen says. “To convince a large producer who’s farming many acres to add the complexity of a mixture to that system is a hard sell, but oats represent a good entry point.”

Ultimately, Deen hopes the data will show that some of the benefits of cover cropping can be realized fairly rapidly; otherwise, it can be tough to convince skeptical producers to give it a try.

According to Van Eerd, an increase in soil health improves both crop productivity and soil resilience, which are goals worth striving for even if the payoffs aren’t immediate.

“In those dry years, or in extreme weather years, you’re seeing better yields. That’s where your soil is performing and you’ll see the benefits over the long-term,” she says.

Cover crop resources
There’s a growing list of resources available for Ontario producers interested in cover cropping, according to Laura Van Eerd, associate professor in the University of Guelph’s school of environmental sciences.

Producers can start with OMAFRA’s website, which offers resources on choosing cover crops. Van Eerd has created a cover crop decision tool that sorts crop types by planting window and performance, which can be found at decision-tool.incovercrops.ca.

The Midwest Cover Crop Council offers a wide range of resources for producers interested in cover cropping. But the resource Van Eerd recommends most highly is the Midwest Cover Crops Field Guide, available from Purdue University. It includes information on all aspects of cover cropping across a range of systems including her Ontario research. This pocket guide is available via mobile app.