Over the past several years, interest in cover cropping has increased in Ontario, says Laura Van Eerd, an associate professor in the School of Environmental Sciences at University of Guelph’s Ridgetown Campus. 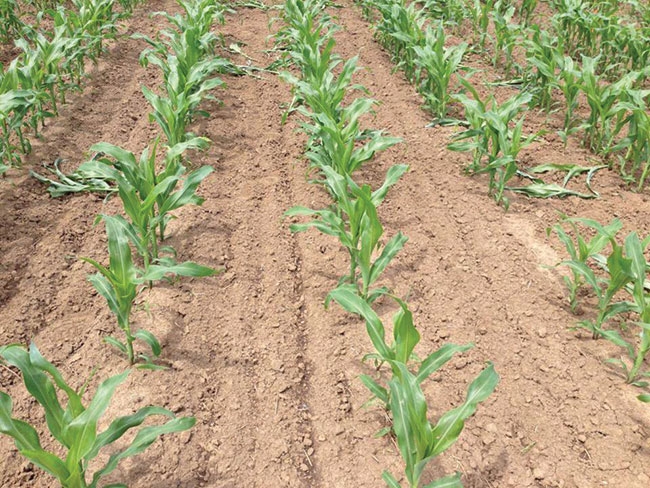 Corn seedlings emerging after termination of a cover crop. Over the past several years

“Over the past five years we have had cover crop open houses on campus in the fall and we can get 20 to 30 people coming out,” she says. “Now we’re getting new people, including certified crop advisors, input providers and crop consultants, and they in turn reach many more people.”

Led by then-master’s student Claire Coombs, the team conducted a field study over four site years between 2012 and 2014 to assess nitrogen dynamics and grain corn yield in a cover crop-corn rotation.

According to Van Eerd, the team used a winter wheat system so cover crops planted after harvest could have a long growing season before corn planting the following year.

Van Eerd explains that red clover is commonly underseeded with winter wheat, or frost-seeded in the early spring. “In that system, it can work wonderfully; however, in some years you’ll have variable red clover stands, from nothing to lush stands.”

“Our question was, if you have a variable stand when you harvest winter wheat, what is the value of planting red clover, alfalfa or crimson clover after harvest, and how should you do it? If you have to plant after wheat harvest can you get a similar response to underseeding red clover?”

When the team began the study, crimson clover was becoming more widely available. “We learned quite a lot,” Van Eerd says. A warm-season cover crop, crimson clover is not competitive and, in the trial, wasn’t suitable for underseeding with winter cereals. “We didn’t do this in our study, but based on what we’ve seen since starting the study, crimson clover is nice in a mix that is drilled in the summer after winter wheat,” she says. “If you’re going to plant a cover crop mix it works okay there, but be prepared to have to terminate it in the spring.”

Research findings
Coombs, who now works as an educator at Penn State Extension in Pennsylvania, says she compared three different cover crops with a no-cover crop control. In the control plots, three nitrogen fertilizer rates were used (no nitrogen added as a side dressing, a low rate of 100 pounds per acre (lbs/ac) added, and a high rate of 200 lbs/ac added).

“These three rates would allow for comparison between the amount of nitrogen in the cover crop plots during corn season and a fertilized corn plot,” Coombs explains. “We also split all our plots to be tilled in the fall or spring to determine if different tillage timing would influence nitrogen cycling.” Results showed that delaying tillage to the spring meant overall nitrogen levels increased in the system compared to fall tillage.

“The three cover crops I studied all reduced the amount of nitrogen that was in the soil during the non-growing season and could potentially be lost to the surrounding environment,” she says.

Benefits did differ depending on the cover crop used. Red clover and alfalfa had higher nitrogen levels in the system versus crimson clover or no cover crop. “This indicates that there should be more nitrogen in the system at corn planting when one of these two cover crops are used as compared to not having a cover crop in the rotation,” she says.

Though there was a demonstrable improvement in the amount of nitrogen left in the system at corn planting, Coombs says it was difficult to track nitrogen availability throughout the corn growing season, or to assess the ongoing benefits of the previous season’s cover crop.

According to Coombs, the results of her study should encourage more producers to add cover crops into their rotations. “Though our study did not show a significant yield improvement, several other studies have demonstrated the positive effects of cover crops on yield,” she says.

“I would recommend producers start with a mid-rate (six to eight lbs/ac) and allow it to grow for as long as possible. I would also encourage allowing the crop to overwinter and terminating in the spring only a few days before corn planting.”

What to consider when choosing a cover crop
Each cover crop has its own attributes, some are better suited for particular uses than others. Consider the following when making your selection: