Pre- and post-emergent control of glyphosate-resistant common ragweed in corn. 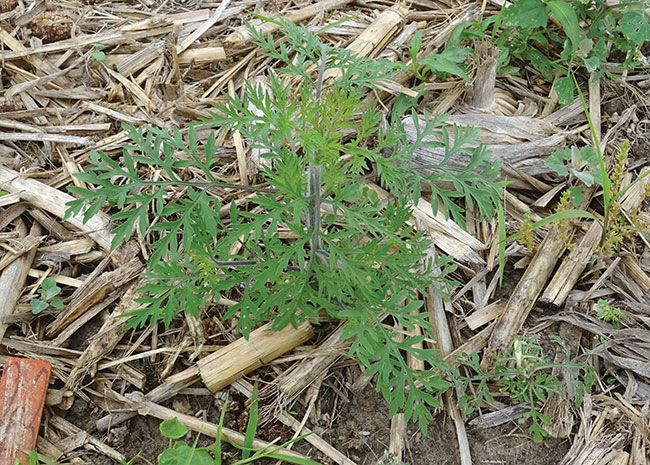 Despite being localized, it’s important for producers with GR common ragweed to know how to handle it. PHOTO COURTESY OF DAVE BILYEA.

The list of herbicide-resistant weeds is growing in Eastern Canada, with some a greater concern than others. Glyphosate-resistant (GR) common ragweed was discovered in seed collected in Essex County, Ont. in 2011, says Peter Sikkema, a professor of weed management at the University of Guelph Ridgetown Campus. Eight years later, GR common ragweed is one of four GR weeds documented in the province, but it still hasn’t yet spread out of Essex County, bumping it to last place on the list of GR weeds in terms of its economic importance for producers.

Of the other three GR weeds known to be in Ontario, GR Canada fleabane has spread to 30 counties. GR waterhemp, confirmed in four counties, is an emerging problem. But, producers have done a “fantastic job” controlling GR giant ragweed in the six counties where it has been found, Sikkema says. Though GR common ragweed is very localized to a handful of fields in the northwest corner of Essex County, it is still important for producers who have it to know how to handle it, he says.

Sikkema led a two-year study consisting of eight field experiments in 2016 and 2017 to evaluate the efficacy of pre-emergence and post-emergence herbicides on controlling GR common ragweed in corn.

The study was conducted in a single field infested with GR common ragweed near Tecumseh, Ont. Two experiments with pre-emergence herbicides were conducted in each calendar year, separated by two weeks. Treatments included a weedy control, a weed-free control, and fifteen soil-applied herbicide treatments. Each of the herbicide treatments were applied using the highest registered label rate in Eastern Canada. Glyphosate was applied to the entire experimental area to remove the confounding effect of all other weed species.

Sikkema also completed a parallel study looking at the efficacy of post-emergence herbicides. This trial ran on the same fields in Tecumseh, Ont. in 2016 and 2017, and included a weed-free control, a weedy control, and 13 herbicide treatments, each of which included glyphosate.

Sikkema says although these studies show there are effective pre- and post-emergence herbicide options, the industry needs to shift toward more diverse weed management programs.

“We need to have more diverse crop rotations – ideally a minimum of three different crops in the rotation, – and I think we need to incorporate multiple herbicide modes of action across the rotations.”

In corn and soy, Sikkema recommends a two-pass weed control program, starting with a soil-applied herbicide that matches the weed spectrum in each individual field. For some producers, a well-rounded weed control program might include strategic tillage or the use of cover crops after a winter wheat rotation.

“For some GR weeds the objective may be perfect weed control with no weed seed return to the seedbank. We have to think of weed management in a more holistic pattern than we did 15 years ago.”