Relative timing of maturity of the weed and crop is important. 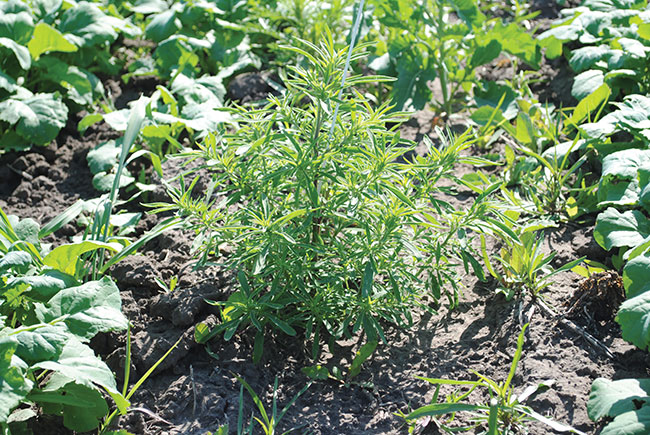 Across the Prairies, recent weed surveys show that weed density has increased approximately three-fold as compared with a 2003 survey. Alongside the increase in density, in many crops the incidence of difficult to control and herbicide-resistant weeds is also increasing. Harvest weed seed management using various techniques has recently emerged as a strategy to help manage herbicide-resistant and hard to kill weeds.

“In a recent project led by Steve Shirtliffe, we evaluated the potential of harvest weed seed management techniques to manage seed production of three difficult weeds in canola including cleavers, kochia, and wild buckwheat,” explains Lena Syrovy, research assistant with the College of Agriculture and Bioresources at the University of Saskatchewan. “There has been previous research on managing weed seed production through techniques such as crop topping, weed seed destruction and chaff collection and we wanted to know if these strategies might also work with difficult to control weeds in conventional field cropping systems. In order to investigate various techniques, our first objective was to determine the timing of seed shed of cleavers, kochia, and wild buckwheat growing in canola.”

“Another important finding is that the relative timing of when a weed matures compared to when the crop is harvested can make a big difference in which weed seed management strategies would be most effective,” Syrovy adds. “All of the weeds tested will have lost more seeds if the crop is harvested later, compared with if the crop is harvested earlier. This means that even with a seed destructor or chaff collection more weed seeds would be left on the ground. If the canola crop was harvested as early as possible in mid-September, approximately 73, 65, and 90 per cent of seeds would remain on weed plants, while if canola harvest was delayed to the end of September, approximately 54, 32, and 56 per cent of total seeds produced would remain, on cleavers, wild buckwheat, and kochia plants, respectively. Therefore, harvesting as early as possible, with the use of chaff collection or weed seed pulverization techniques, will minimize the number of seeds returned to the weed seed bank. As well, early planting or growing early maturing varieties may aid producers in collecting more weed seeds at harvest.”

Researchers also investigated the possibility of using a pre-harvest herbicide application to see if that would stop the weeds from forming and producing seeds, or reduce seed viability. However, in the canola trials, most of the weed seeds were already mature by the time a pre-harvest application could be made so it wasn’t effective. This suggests herbicide application at canola swathing time is not early enough to prevent seed formation, nor reduce weed seed viability for the three weed species tested. 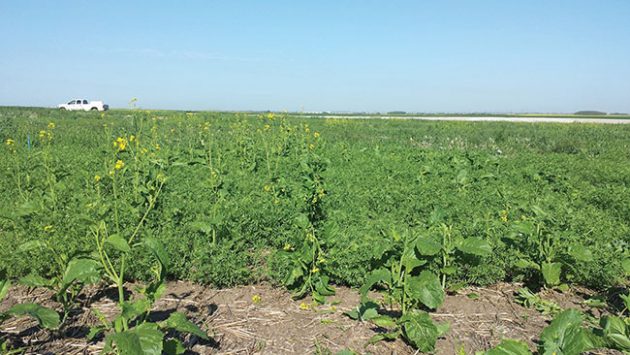 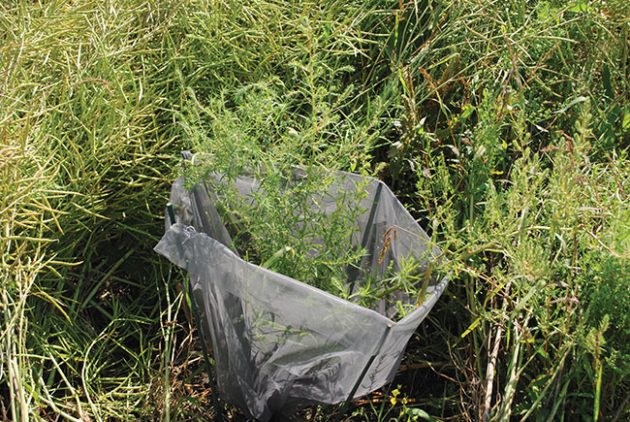 “Although our project results didn’t show a benefit to using a pre-harvest herbicide application in canola or lentil as a weed seed management strategy for our target weeds, other research is showing it may be a potential strategy for certain weeds in earlier crops such as lentils,” Syrovy says. “In a recently completed project in Christian Willenborg’s program at the university, graduate student Ethan Bertholet showed that pre-harvest desiccation in lentil can affect seed development of kochia, although it did not significantly reduce seed production. His study showed that kochia seeds collected after desiccation in lentil were smaller, and had reduced viability and vigour. This study highlights the potential for this strategy with an early maturing crop like lentil and a later maturing weed such as kochia, and emphasizes the importance of the relative timing of maturity of the crop and the target weeds.”

Syrovy adds their team is continuing this research work including extending it into pulse and other crops. One of the priorities is to look at ways of stopping weeds from forming seeds in the first place, rather than trying to collect and manage the seeds at harvest. For weeds such as wild oat or wild mustard, which tend to produce viable seeds before crops are mature, they could be good targets for management strategies such as clipping or wiping. If there is a good height differential between the crop and tall weeds such as wild oat, then strategies such as going in when the weeds have elongated above the crop and clipping off the panicles or flowers, or wiping a non-selective herbicide on those tall weeds above the crop may be effective. This can be a good solution for a pulse crop such as lentil or pea, where wild oat and wild mustard can be taller than the crop. However, this may not work with a taller crop such as canola, which may be as tall as the weeds by the time the weeds are flowering.

“This management strategy can have a good fit, particularly in crops where weeds may have escaped the earlier herbicide application, either due to lowered herbicide efficacy or herbicide resistance,” Syrovy says. “Using management strategies such as clipping or wiping can potentially stop the weeds from proliferating, so they aren’t as much a problem in future years. Although these techniques may not really help the current crop, they can be more of a long-term strategy in an integrated weed management program to try and reduce weed problems in the following years. We are continuing to look further at relative maturity of the crop and weeds, and also a number of management strategies that can either prevent weeds from producing seeds or delay their growth to reduce or stop seed development. These will provide additional tools for growers as they try to manage hard to kill and herbicide resistant weeds in their cropping systems.”