Glyphosate-resistant (GR) waterhemp was first found in Ontario in 2014, but it already has a foothold in three counties in the southwest of the province. Fortunately, Peter Sikkema’s research group at the University of Guelph’s Ridgetown Campus has made a good start on finding effective options for controlling this challenging weed. 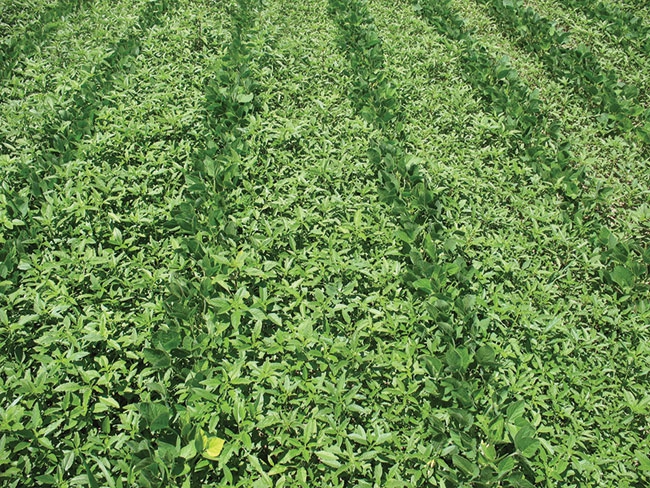 “Waterhemp is the number 1 annual broadleaf weed that they tackle in the corn-soybean belt of the United States Midwest. I thought it would spread rapidly across Ontario as it did in the U.S. Midwest, so we did research on waterhemp in the early 2000s,” Sikkema says.

“Then in 2014, a salesman from one of the herbicide manufacturers brought a weed into my office – it was a waterhemp plant, and the grower had applied glyphosate twice and had poor control, so we started conducting research on it again.”

In 2015 and 2016, Sikkema’s group found GR biotypes of waterhemp at 40 of the 49 sites they sampled in the three southwestern Ontario counties (Table 1). Sikkema suspects GR waterhemp had been present in those counties for a number of years but that farmers had misidentified the weed as redroot pigweed, green pigweed or smooth pigweed. Waterhemp (Amaranthus tuberculatus var. rudis) is in the same family as the pigweeds and looks somewhat similar. If you are unsure whether you have waterhemp in your fields, the Weed ID Guide for Ontario Crops has tips for distinguishing between the different Amaranthus species.

“I think the main feature that contributes to waterhemp’s rapid development of herbicide resistance is that it is a dioecious species. Dioecious simply means waterhemp has male plants and female plants, and therefore you always have cross-pollination between the male and the female, which by definition means there will be a huge amount of genetic diversity in a waterhemp population in a field,” Sikkema says.

“In addition to that, waterhemp is a very prolific seed producer, producing up to a million seeds per female plant, according to some sources. So there are a large amount of seeds with wide genetic diversity. That means there is a high likelihood of selecting for resistant biotypes if you use the same weed management tactics year after year.”

One of the challenges in controlling waterhemp is its very long emergence period. Two of Sikkema’s graduate students conducted trials to document waterhemp’s emergence pattern. They found waterhemp begins to emerge shortly after spring tillage and continues to emerge through the entire summer. “In both studies, waterhemp still came up into September,” Sikkema says.

If waterhemp is not controlled, it can cause substantial yield losses. “In some of the earlier research that we did in Ontario, yield losses in soybean approached 75 per cent. In 2016, we had fields with greater than 1,000 waterhemp plants per square metre, so the yield loss was absolutely tremendous,” he notes. In some of the weedy checks in his research group’s 2016 waterhemp trials, yield losses were around 75 to 85 per cent in corn and soybean. [Click images below to expand.]

Some of the weedy checks in the glyphosate-resistant waterhemp trials had significant yield losses.

Control in soybean
Over the past two years, Sikkema’s group has done a lot of research on GR waterhemp control in soybean, looking at pre-emergence, post-emergence and two-pass systems and various types of herbicide-resistant soybean. They are testing products used in Ontario, as well as some that are not yet registered.

They’ve found some options that look pretty good. “With soil-applied herbicides, two products gave greater than 85 per cent control: Fierce and Boundary,” Sikkema says. “Some of the other soil-applied herbicides provided disappointing control. For instance, Prowl was 16 per cent, Eragon was 35 per cent, and Pursuit was 10 per cent; the poor control with Pursuit was because there is Group 2-resistant waterhemp at all the sites.”

A two-pass approach worked well in the Roundup Ready soybean trials. “In terms of the two-pass programs, Fierce or Boundary can be used as a setup program, but control was less than 90 per cent. However, when the pre-emergence herbicide was followed by either Blazer or Reflex, there was 94 to 99 per cent control.”

Sikkema adds, “I think Ontario farmers are going to have to be prepared to use a two-pass program [to control glyphosate-resistant waterhemp], using their best soil-applied residual herbicide, and then scouting the field regularly. If they get a late flush of the weed, they’ll have to come back with an effective post-emergence herbicide and our data would say Blazer and Reflex are the best options.”

His research group is also conducting trials with Enlist soybean, although this soybean is not currently registered in the province. He says, “Boundary and Fierce with no post-emergence herbicide provided 80 and 95 per cent control, respectively. I think Fierce is the best soil-applied herbicide, and this experiment shows that. However, where we followed either of these soil-applied herbicides with Enlist Duo applied post-emergence, the control was 99 per cent. I really think the Enlist technology will give Ontario farmers an option in terms of managing this weed when the technology gets registered.”

Similar trials with LibertyLink soybean have shown good results with a two-pass program. “In these trials, Boundary and Fierce provided 81 and 92 per cent control [respectively] at 56 days after application. Where we followed the soil-applied herbicide with a post-emergence application of Liberty in LibertyLink soybean, the control was between 95 and 99 per cent,” Sikkema says.

In addition to these trials, the research group is also exploring some related issues. For instance, they are examining the biologically effective rate of Fierce. They want to see if they can lower the rate to reduce the risk of soybean injury while still getting commercially acceptable control of GR waterhemp. Another experiment is assessing how the size of waterhemp at the time of application affects herbicide efficacy.

Control in corn
Sikkema’s group has just started evaluating control of GR waterhemp in corn, comparing soil-applied herbicides in one experiment and post-emergence herbicides in another. He says, “In terms of the soil-applied herbicides, our data says that, of the herbicides available in Ontario, Lumax is the most efficacious for the control of glyphosate-resistant waterhemp. For post-emergence, we had 96 per cent control with Callisto + Atrazine and 91 per cent with Marksman.”

However, Sikkema stresses, “That is based on just two experiments in 2016, so that is not a very robust data set. It gives an indication of which herbicides are more effective, but we will definitely repeat that research for the next two or three years to get a more robust dataset so we can have more confidence in the data.”

As with soybean, a two-pass program might be necessary for controlling GR waterhemp in corn.

“Our data would say that you have to start with a very effective pre-emergence residual herbicide, and then you have to monitor the field for the entire summer. And if you do get a late flush, you may have to come back with a post-emergence herbicide,” Sikkema says.

Funders for Sikkema’s GR waterhemp studies include the agricultural products companies, Grain Farmers of Ontario and Growing Forward 2, through the Agricultural Adaptation Council.