There is nothing sweet about this disease. Chocolate spot has devastated fababean crops in Australia and Europe, but so far, western Canadian growers have managed to miss most of the damaging effects of the disease. 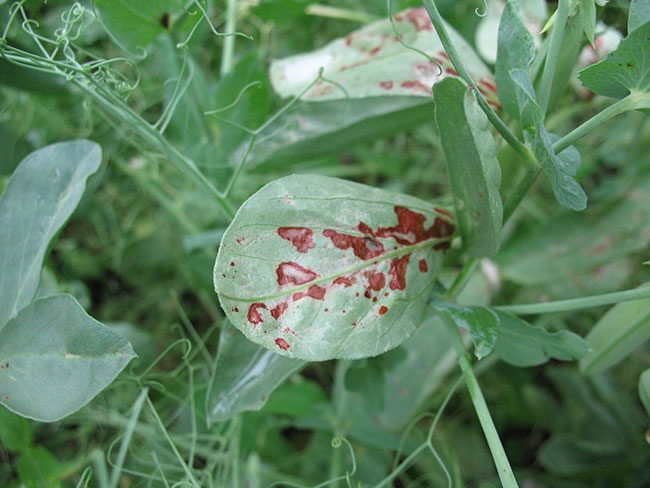 Lesions can grow and merge There is nothing sweet about this disease.

“In fababean, we know the disease is here, but there have only been a couple cases where we thought there might have been an impact. In those cases, the quality was still there, but we don’t know if it affected yield,” says Robyne Bowness, pulse research scientist with Alberta Agriculture and Forestry (AAF) in Lacombe, Alta.

Bowness says chocolate spot prevalence in 2016 was similar to 2014, when it was seen at low levels throughout the province. It was too dry for chocolate spot to develop in 2015, but inoculum carry over into 2016 meant that, although the 2016 growing season started off dry, the wet summer and fall resulted in the development of the disease. Still, damage in 2016 seemed to be limited; the bigger concern last year was alternaria.

Chocolate spot is caused by Botrytis fabae and Botrytis cinerea, and can be residue-borne or seedborne. B. cinerea is the same species that infects lentil, causing grey mould stem and pod rot. The B. fabae species is the most devastating in Australia and Europe, causing quality and yield loss under moderately warm temperatures (10 to 20 C) and humid, wet conditions, especially at flowering time.

Sherrilyn Phelps, agronomy and seed program manager with Saskatchewan Pulse Growers, says that, like in Alberta, chocolate spot was observed in Saskatchewan but quality and yield impacts were not common.

“I didn’t see a lot of fields where the infection levels would have been damaging. There was spotting, but it was likely the less virulent species that was causing the infection,” Phelps says.

In the Saskatchewan survey funded by the Saskatchewan Pulse Growers and led by Sabine Banniza at the University of Saskatchewan, 18 fields were evaluated for foliar diseases. Analysis of leaf tissue from the fields for the presence of Botrytis (chocolate spot) was conducted at the University of Saskatchewan. Lab analysis confirmed the presence of Botrytis from 16 of the 18 fields (89 per cent incidence). The incidence of Botrytis within lesions from each field ranged from zero to 100 per cent, with a mean of 49 per cent. These results correlated poorly with field observations where visual ratings indicated higher incidence, suggesting the visual foliar disease ratings likely included other diseases than just Botrytis infections on the plants.

Symptoms first appear as small reddish dots, which look like spots splattered on the leaves. Under warm temperatures and good moisture, the spots grow into well-defined blotches with reddish brown margins and tan centres on the leaves, stems and pods. If conditions are suitable, these lesions grow and merge, resulting in the whole leaf turning brown and some leaves dropping from the plant. Small sclerotia bodies similar to Sclerotinia sclerotium (white mould) can be found inside the stems of badly diseased plants.

Leaf spotting on lower leaves can sometimes be caused by herbicide application from Group 4 and 5 herbicides. In this instance, only leaves that had emerged at the time of herbicide application would have spotting. The spots would not continue to grow, as with chocolate spot, nor would the spots infect newly emerging leaves.

Lesions can grow and merge

Many known unknowns
Much of what researchers know about chocolate spot comes from Australia and Europe. In Western Canada, several research studies are underway or have been proposed to better understand chocolate spot. At Agriculture and Agri-Food Canada, research scientists Syama Chatterton and Héctor Cárcamo are wrapping up a study looking at the potential for an interaction between B. fabae and lygus bug in fababean, separate and combined damage, and yield response and seed quality of fababeans in relation to insecticide and fungicide application.

Chatterton and Bowness have also submitted a joint research proposal for funding on aspects of the epidemiology of chocolate spot. The objectives of the proposal are to: assess incidence and severity of chocolate spot and other foliar diseases on fababean in Saskatchewan and Alberta; determine conditions leading to Botrytis spore release and infection in the field; and examine the effect of leaf wetness duration, temperature and inoculum concentration on disease development.

“It is difficult to make management recommendations when there are gaps in understanding in the biology of the pathogens in Canada,” Chatterton says.

Reliable control methods are limited, since so little is known about the disease. There are no economic thresholds established in Western Canada, so timing of fungicide application based on infection levels and growth stages of fababean are a guess. Information from the 2016 Saskatchewan Guide to Crop Protection indicates only Priaxor fungicide is registered for Botytris control in fababean. Other fungicides registered on fababean for control of other diseases may not control Botrytis. Check labels carefully and ask manufacturers if a fungicide is registered on fababean for control of B. fabae, the most damaging species.

“I’ve only heard of a few cases where leaf spotting was terrible and the crop was sprayed with positive results. But if we can positively identify that B. fabae is causing a problem, and we can establish economic thresholds, that would have us reconsider fungicide applications,” Bowness says. “Right now, it appears B. cinerea is causing most of the leaf spotting and the infection is only cosmetic, not requiring fungicide application.”

Until more is known about the disease, growers are advised to avoid fungicide applications as much as possible. Because the pathogen can also infect lentil, producers should avoid growing fababean on lentil stubble. The Saskatchewan Ministry of Agriculture recommends a four-year crop rotation and avoiding lentil and buckwheat in the rotation. However, Botrytis can survive in the absence of a host crop, so crop rotations will not completely eliminate the disease. Using disease-free seed is also important.