Set out a free smorgasbord and see who shows up. In the case of fababean, as acreage has risen, pea leaf weevil and lygus bug have been coming to dinner. For producers, the main concern with pea leaf weevil is feeding on nitrogen-fixing nodules, while for lygus bug, the economic impact is related to seed quality. 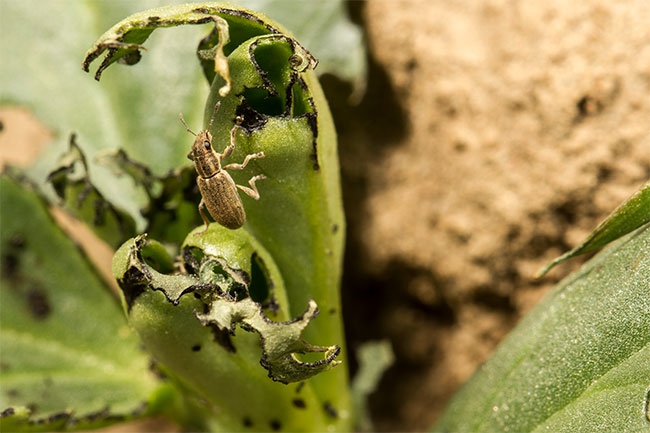 Pea leaf weevil adult feeding on fababean. Set out a free smorgasbord and see who shows up.

Pea leaf weevil
Pea growers in south and central Alberta and southwest Saskatchewan are very familiar with the pea leaf weevil. Evidence of the pest can be seen in the typical notching of pea leaves. However, larval feeding on root nodules is the primary cause of yield loss. The same damage occurs with fababean and as pea leaf weevil infestations expand, so too may economic losses occuring in fababean.

According to the 2016 Alberta survey conducted on pea fields, the pea leaf weevil is now found as far north as Sturgeon County, north of Edmonton, and is well established through west-central and southern Alberta.

“The pea leaf weevil range has expanded dramatically in Alberta since 2011. Since 2014, pea leaf weevil damage has been seen on fababeans in a larger area than shown in the survey for peas,” says Scott Meers, provincial entomologist with Alberta Agriculture and Forestry in Brooks, Alta.

However, in 2016 the areas infested with pea leaf weevil were similar with respect to pea and fababean. Central and west-central Alberta are prime fababean growing areas, and the impact of pea leaf weevil may soon be felt in these areas. Still, what is known about pea leaf weevil mostly relates to field pea.

“We have been looking at fababean seed treatments for pea leaf weevil control at Vauxhall, [Alta.],” says Héctor Cárcamo, research scientist with Agriculture and Agri-Food Canada (AAFC) at Lethbridge, Alta. “In the two years of seed treatments, we never saw a yield response. I suspect it is because there wasn’t enough pea leaf weevils at the site to cause yield damage, and the field also had a lot of variability from saline sites, so yields were variable as well.”

In 2016, Cárcamo started a multi-year pea leaf weevil study at AAFC Lethbridge and Lacombe, Alta., to investigate pea leaf weevil control with the seed treatment Cruiser 5FS (thiamethoxam, Group 4) on fababean or with foliar insecticides. He hasn’t had a chance to dig deep into the first year results, but some preliminary analysis from Lacombe suggests a yield increase from the seed treatments but not from the foliar sprays.

“That is a very preliminary observation at only one site so look at that with caution,” Cárcamo says. “We did still see some feeding damage on the nodules even when the seed treatment was applied. That is not surprising because we’ve seen the same thing with field pea research in the lab. In peas, only about 30 per cent of the adults are killed or knocked down by the seed treatment while the remaining adults survive. The surviving adult weevil females lay fewer eggs than healthy (non-intoxicated) females. Some larvae still hatch to feed on the nodules but about half of them will die compared to non-treated plants. We want to confirm if the same type of crop protection happens in fababean.”

Scott Hartley, provincial insect specialist with the Saskatchewan Ministry of Agriculture says the pea leaf weevil was found primarily in southwest Saskatchewan, but in 2016 it was noted that pea leaf weevil distribution was considerably larger than previously known, and has been confirmed as far north as Saskatoon. While the range of pea leaf weevil had not historically overlapped with where fababeans are grown, that is no longer the case.

“We’ve seen pea leaf weevil feeding on irrigated fababean at Outlook, and high levels of feeding were also seen on pea near Kyle, and on fababean near Davidson and Saskatoon,” Hartley says.

Anecdotal evidence also suggests pea leaf weevil prefers fababean over field pea as a host crop. Cárcamo theorizes this may be because field pea matures sooner, so fababeans are more attractive to the weevil later in the season. Ongoing research by students working with Cárcamo is looking at laboratory studies to determine feeding preferences between fababean and peas.

Cárcamo received questions from growers and agronomists this past summer regarding the level of feeding and the impact on yield. He cautions growers to avoid foliar sprays, even if there appears to be a large amount of foliar feeding by pea leaf weevil.

“The foliar notching damage we’ve seen is usually less than 20 per cent of the crop canopy. It may look really bad, but this doesn’t cause economic damage. The crop can compensate for that level of damage, so spraying isn’t necessary in most years,” he explains.

Cárcamo and Hartley say the best advice is that if a fababean grower is in an area with historic pea leaf weevil infestations, use a seed treatment. Two are currently registered; Cruiser 5FS and Stress Shield (imidacloprid, Group 4A).

Lygus bug
The economic impact from lygus bug is due to feeding on developing seed, which can impact seed quality in the human consumption market. The adult lygus bug punctures the seed pod and sucks on sap in the developing seed. The damage causes dark spots on the seed. If more than one per cent of the seed sample has this damage, it will be downgraded from No. 1 Canada grade. The feeding may also cause yield loss, although this has not been quantified in Western Canada.

Another concern for growers and researchers is the relationship between lygus bug feeding and chocolate spot, a disease caused by Botrytis fabae and Botrytis cinerea. While chocolate spot has not been a major issue in Western Canada, in Europe and Australia it is a major disease, causing leaves to turn brown, reducing quality and yield under moderately warm temperatures.

In Lethbridge, Cárcamo and AAFC research scientist Syama Chatterton are looking at the relationship between lygus bug and chocolate spot. In one study, done in collaboration with Meers, they surveyed about 25 commercial fababean fields in 2015 and 2016 for the presence of lygus bug and chocolate spot. The incidence of both was generally low, though there were a few cases of high instances.

“There was a stratification to the seed damage. It occurred primarily in the top portion of the crop where the lygus were feeding,” Chatterton says. “We did find, though, that when we tested the damaged seed, we found the disease pathogen. We think that the lygus bug creates an entry wound and allows the pathogen to enter the pod. The damage, though, seems to be related to the lygus bug feeding.”

Chatterton and Cárcamo also had a two-year study looking at economic damage, yield response and seed quality of fababeans in relation to insecticide and fungicide application, alone or together, at Lethbridge, Lacombe and Saskatoon in 2015 and 2016. Those results are still being analyzed, but they hope to be able to develop recommendations for chocolate spot and lygus bug control.

A challenge for fababean growers in canola growing areas is that, since canola is harvested first, lygus bugs move from those fields to the still green fababean fields to feed on the developing seeds. The difficulty for growers is that research has not determined at what infestation levels lygus bug causes economic damage. Nor is it known if and when insecticide application will result in an economic benefit, although re-invasion has been shown to be problematic.

An older research study highlights the difficulty in controlling lygus bug with foliar applications. In a three-year research trial by the late Lloyd Dosdall, then a professor at the University of Alberta, at two locations in northwest Alberta from 2001 through 2003, the researchers found no economic benefit for applying an insecticide for lygus control in fababean. Matador was applied at four different treatment timings: July 2; July 2 and 15; July 2, 15 and 30; and July 2, 15, 30, and Aug. 13. While Matador application decreased lygus bug puncture wounds on the pods, the samples were still downgraded from No. 1 Canada grade after four applications of the insecticide.

Given the current lack of recommendations for insecticidal control of lygus bug, the best option to manage lygus bug is through cultural methods. Seed early to potentially help your fields escape the lygus bug flush from canola fields. Control preseed and in-crop weeds to remove plants that early emerging lygus bugs can feed on.

Cárcamo also says growers should avoid spraying insecticides for lygus bug control until more is known from the research. He says fababean requires bee pollination to produce high yields, and insecticide application may impact these pollinators. Additionally, several parasitoids of lygus have been noted on the Prairies, and these beneficials may help to keep lygus bug infestations to a non-economic level.

“If you are going to spray an insecticide, make sure you spray late in the evening or at night so that you reduce the impact on pollinators and beneficial insects,” Cárcamo cautions.


Related
Keeping an eye on chocolate spot
When pathogens and pests collide
The good, the bad and the ugly of insect pests
Old pests and emerging insect problems