In September 2015, a corn disease called tar spot was detected for the first time in the United States. Until then it had only been known to occur in Mexico and parts of Central and South America. 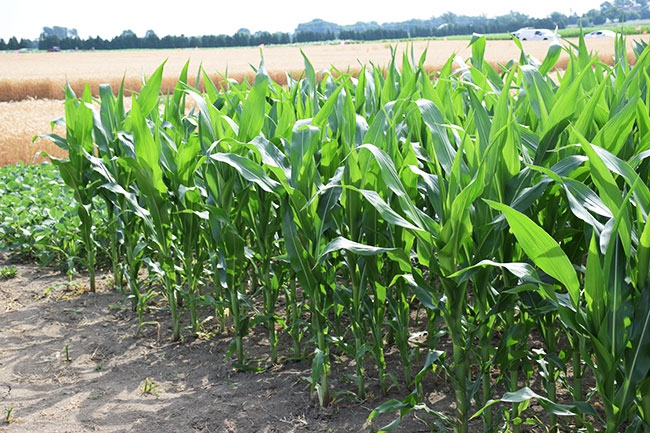 According to the University of Illinois’s Suzanne Bissonnette, the disease symptoms – little black spots on corn leaves – were first noticed by a commercial agronomist while inspecting his corn plots in Illinois and Indiana in 2015. He contacted Kiersten Wise, an extension plant pathologist at Purdue University in Indiana, and submitted samples to the Purdue Plant and Pest Diagnostic Laboratory. The lab identified the pathogen as Phyllachora maydis, a fungus that causes tar spot in corn. Since the pathogen was new, the Purdue lab sent the samples to the United States Department of Agriculture’s national diagnostic lab. The national lab confirmed this first U.S. detection of Phyllachora maydis.

“So we started scouting for the disease in Illinois, and Kiersten and her group started scouting in Indiana, and a number of counties were found to have tar spot,” says Bissonnette, who is assistant dean for agriculture and natural resources at the University of Illinois Extension and also director of the university’s Plant Clinic.

The pathogen was confirmed in a total of seven counties in northwestern Indiana and 13 counties in north central Illinois in 2015. “When this disease showed up in all those counties, we collected infected leaf material and did an overwintering study to try to determine if the pathogen could survive the Illinois winters or not,” Bissonnette explains. “When we took that material to the lab in the spring, we couldn’t find any live fruiting structures of Phyllachora maydis.”

That might sound like good news, but tar spot was found in Illinois again in 2016. Bissonnette says the Plant Clinic confirmed the presence of the pathogen in samples from three Illinois counties. The clinic also received photos, but not actual samples, of suspected tar spot in four other counties in the state. All the confirmed and suspected cases were found in counties where the disease had been detected in 2015.

“So it looks like the pathogen survived in Illinois, but I cannot say definitively that it did. Certainly our overwintering study suggested that it wouldn’t. So again in 2016, we collected more infected leaf material, and we’re doing another overwintering study,” Bissonnette says.

Illinois was not the only state to have tar spot detections in 2016. Reports came from such states as Indiana, Iowa, Wisconsin and Florida; Michigan has a case that has not yet been confirmed.

Phyllachora maydis isn’t known to be seedborne, so if it didn’t overwinter in the soil or on crop residues, then it might have blown into the U.S. on the wind.

“We suspect the main reason why a lot of tar spot was found in 2015 was that the spores blew in from Mexico and possibly Central America with wind-driven rain and storm events. Common rust spores follow a similar pathway from Mexico and Central America and the southern U.S., moving those rust spores into Ontario,” says Albert Tenuta, a plant pathologist with the Ontario Ministry of Agriculture, Food and Rural Affairs (OMAFRA).

So far, Monographella maydis has not been detected in the U.S. “In any of the tissues that we have received at our lab this year and last year, we tried to find Monographella in association with those tar-like fruiting structures, and we have yet to find it. So that is one bit of good news,” Bissonnette says.

Another piece of positive news is that, if the tar spot complex does become a problem in the U.S. and/or Canada, it can be managed with fungicides. Bissonnette says, “There is good data from CIMMYT [International Maize and Wheat Improvement Center] in Mexico that tar spot is controlled by the same fungicides that we use for our common leaf blights. The fungicides would require labelling for this use [in the U.S. and Canada], but it’s good news.”

For Ontario corn growers, there’s more good news: Tar spot has not been detected in the province to date. “We do our crop disease surveys every year. On a routine basis, we evaluate not only the distribution and severity of the diseases we have right now in field crops, but we also try to catch those invasive disease migrants when they first come into the province,” Tenuta says. “In 2015 and 2016, we looked for tar spot, Goss’s wilt, bacterial leaf streak and a whole bunch of other newer diseases and we didn’t detect or confirm the presence of any of them.”

Of course, it’s also important for growers to keep an eye out for new diseases like tar spot when scouting their crops. “I wish I could say when to scout for tar spot, but we don’t actually know when it would normally show up in the Corn Belt,” Bissonnette says. “That’s one of the things that needs to be investigated – when does it really show up here, when does it really start infecting the plant material?”

In 2015 and 2016, the disease was found only later in the season in Illinois. She thinks fungicide application timing and/or weather conditions may have played a role in this. “Across the Corn Belt, it is very common to have a fungicide application in corn right around tasseling to manage a number of fairly significant fungal foliar leaf blights, like grey leaf spot and northern corn leaf blight. I suspect part of the reason we’re seeing tar spot at the end of the season is that there is no fungicide left on those leaves to protect them from fungal infection.” She adds, “We have had late-season cooler, wetter weather in the last several years in parts of the Midwest, which is a very conducive environment for this particular pathogen.”

“If you think of the conditions that favour white mould in soybeans or canola, those would be similar conditions that Phyllachora maydis would like. It likes cool temperatures with long periods of leaf wetness or heavy dews or other damp conditions,” Tenuta says.

Tar spot symptoms actually look like little flecks of tar on corn leaves, sheaths and husks. “You get these raised black fungal structures on the foliage. They are like peppercorns embedded in the tissue. They can be individual spots or the spots can coalesce into areas of damaged tissue. The spots can get some yellowing (chlorosis) and brown necrosis around them,” he says.

“Those black structures are called ascomata. They are little reproductive structures where the spores are produced. The ascomata may look similar to old lesions of common rust [which turn to black as they mature]. But with common rust, you’ll see what growers sometimes call ‘little volcanoes’ (pustules) that have ruptured open and you’ll see the rusty spores on the leaves or your clothes. Also, a tar spot-infected leaf will feel bumpy, almost like sandpaper. And if you rub your hands over those black structures of tar spot, they don’t come off, whereas rust spores come off easily.”

Bissonnette and Tenuta both note other plant diseases are also called tar spot because they cause black spots on the plant; an example is tar spot in maple and other trees. But these other diseases are caused by different pathogens. Phyllachora maydis infects only corn.

“Although we are still not sure what the impact of tar spot would be in Ontario [in the long run], based on what we know of the disease and what we’ve seen so far, it will likely be localized in its occurrence and sporadic from year to year,” Tenuta says. “So overall, from an economic standpoint, tar spot isn’t anything to be concerned about at present for Ontario corn growers.”

He advises growers to focus on existing diseases: “Tar spot hasn’t been confirmed here, and many other diseases are present in Ontario fields right now – diseases that are overwintering and that could pose risks to Ontario corn crops, like northern corn leaf blight and grey leaf spot, as well as common rust (depending on the timing of spore arrival into Ontario). Those are all diseases that our growers see every year and should be included in their preventative disease management strategy.”