A successful crop is Mother Nature’s alone to give, but it is also hers to destroy – sometimes in just a few violent, hail- or flood-filled minutes; other times over weeks of drought or excess moisture. With climate scientists in agreement that Canadian Prairie winter and spring temperatures will rise between 2.5 and 4 C within the next 30 to 50 years, expect Mother Nature’s weather whims to be increasingly unpredictable. She’ll give more – there’s already been an average gain of more than 12 frost-free days per season since 1940 – but she’ll take more too: increasingly frequent extreme precipitation events like droughts, floods and hail will add a lot more uncertainty to Prairie crop production.

“How a changing climate will affect you depends on where you are,” explains Dr. Paul Bullock, head of the department of soil science at the University of Manitoba and a presenter at the Manitoba Agronomist Conference in December 2013. “Here in Western Canada, a warming trend will help us on the one hand because we are currently limited by the length of the growing season and the number of available heat units. But, hand in hand with the warming trend will come much more variability in moisture conditions. We’ll have much longer drier periods spaced out between extreme moisture events. Variability is very difficult to manage, there’s no question about that.”

According to Andrew Nadler, an agri-meteorologist with Weather Innovations Consulting and co-presenter at the Manitoba Agronomist Conference, there are definitely some potential advantages to the warming trend. “A longer, warmer growing season will certainly benefit ag production, and we may be able to grow crops that we haven’t grown before, like corn and soybeans in increasingly northern locations,” he says. “But with warmer temperatures, the air holds more moisture, which means there is more available to fall to the ground. Globally we’re seeing more extreme weather conditions and our expectation is that will only continue to increase. So, when our warmer temperatures are coupled with more droughts and more flooding, will that counter the benefits? There are definite unknowns at this point.”

These unknowns are especially big in Alberta, where drought is already a major issue for many producers. While Saskatchewan and Manitoba currently suffer only occasionally from drought, Alberta has little wiggle room for moisture, and any additional dryness could bring severe consequences.

“The levels of moisture stress in Alberta are much higher than in Manitoba. Our uncertainty about future moisture stress makes any forecast for soybean or corn, especially in Alberta, very speculative,” says Bullock. “Right now there are places in southern Alberta with heat units comparable to southern Manitoba, yet little or no grain corn is produced in Alberta. The reason is because of the drought risk.”

Since 1950, the maximum and minimum air temperatures across much of the Canadian Prairies have increased by about 2.5 C during the winter and about 1.5 C during the spring. Over these same years, snowfall has decreased across Western Canada; however, spring rainfall has increased. Projecting forward, scientists expect the rate of change to occur more rapidly.

“The reality is the climate has changed dramatically over decades, centuries, millennia. Change is normal. There’s no question change is happening in the form of a significant warming trend. Will it continue? Will it speed up or level out? Those are fair questions,” says Bullock. “There are dozens of general circulation models that take the known conditions of the past 100 years and roll them forward based on conditions and circulation patterns, and none of these models project any cooling off. Some are projecting tamer changes, some are projecting much more extreme changes. A 2.5 to 4 C increase for the Canadian Prairies is not an extreme projection.”

Keep in mind that climate trends never move in a neatly linear, step-by-step manner. Though the temperature trend is on the increase, the only really important weather is the given year’s highly variable reality, not a multiyear trend.

“The trend is positive in terms of frost-free days, and as heat units creep up over time, you’ll find people willing to risk growing some crops that aren’t traditionally grown,” says Bullock. “But, if you look at historic year-to-year variability, frost-free days can vary by 20 to 30 days. The year-to-year variability is twice what the warming trend has offered. So, the trend in no way guarantees that you’re going to have success in a particular year. You could get lucky or you could get whacked.”

The addition of new-to-us crops is an important and welcome tool in the risk management toolbox. A season that starts late due to flooding or cool temperatures, for example, might be salvageable with more traditional, shorter-season crops. However, in a season that starts early, a producer would be wise to plant multiple longer and shorter season crops with varying flower and harvest dates to spread drought and hail risk.

To further manage risk, producers should begin thinking now about water management strategies, for both times of flooding and times of drought. Currently, few producers impound water upslope in the spring to save for later in the growing season, but doing so effectively and efficiently may prove the difference between success and crop ruin 30 years from now. Interestingly, the biggest stumbling block to this kind of necessary management strategy change may be producers’ attitudes.

“When producers are asked what the biggest limitation is on growing, they bring up genetics, growing season length, price, disease. But no one seems to be talking about the fact that the very biggest losses for individual producers, especially in places like Manitoba, are flood and drought. People are concerned about the length of the growing season, and they need to be, but what might really hurt you in the long term comes down to moisture. We can talk about climatic trends, but what farmers have to deal with, and what they need to find ways to mitigate to the best of their ability, is year-to-year variability. At the very least, they will certainly need to increase their tolerance for risk,” says Bullock. 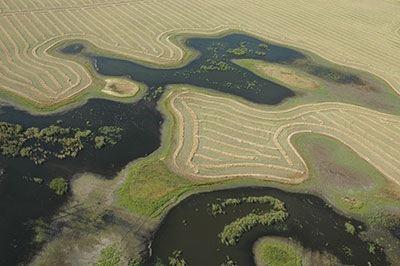 Western Canada’s warming trend will come with much more variability in moisture conditions. How a changing climate affects you depends on where you live.


Related
Grasses with altered pores have implications for crops in changing climate
U.S. drought presents opportunities and challenges for Canadian producers
When it comes to variations in crop yield, climate has a big say
Prairie farmers expected to benefit from changing climate