News
When it comes to variations in crop yield, climate has a big say

Jan. 27, 2015 - What impact will future climate change have on food supply? That depends in part on the extent to which variations in crop yield are attributable to variations in climate.

A new report from researchers at the University of Minnesota Institute on the Environment has found that climate variability historically accounts for one-third of yield variability for maize, rice, wheat and soybeans worldwide — the equivalent of 36 million metric tons of food each year. This provides valuable information planners and policy makers can use to target efforts to stabilize farmer income and food supply and so boost food security in a warming world.

The researchers looked at newly available production statistics for maize, rice, wheat and soybean from 13,500 political units around the world between 1979 and 2008, along with precipitation and temperature data. The team used these data to calculate year-to-year fluctuations and estimate how much of the yield variability could be attributed to climate variability.

Some regions, such as in parts of Asia and Africa, showed little correlation between climate variability and yield variability.

More than 60 per cent of the yield variability can be explained by climate variability in regions that are important producers of major crops, including the Midwestern U.S., the North China Plains, western Europe and Japan.

Depicted as global maps, the results show where and how much climate variability explains yield variability.

The research team is now looking at historical records to see whether the variability attributable to climate has changed over time — and if so, what aspects of climate are most pertinent.

"Yield variability can be a big problem from both economic and food supply standpoints," Ray said. "The results of this study and our follow-up work can be used to improve food system stability around the world by identifying hot spots of food insecurity today as well as those likely to be exacerbated by climate change in the future."

The University of Minnesota's Institute on the Environment seeks lasting solutions to Earth's biggest challenges through research, partnerships and leadership development. For more information, visit environment.umn.edu. 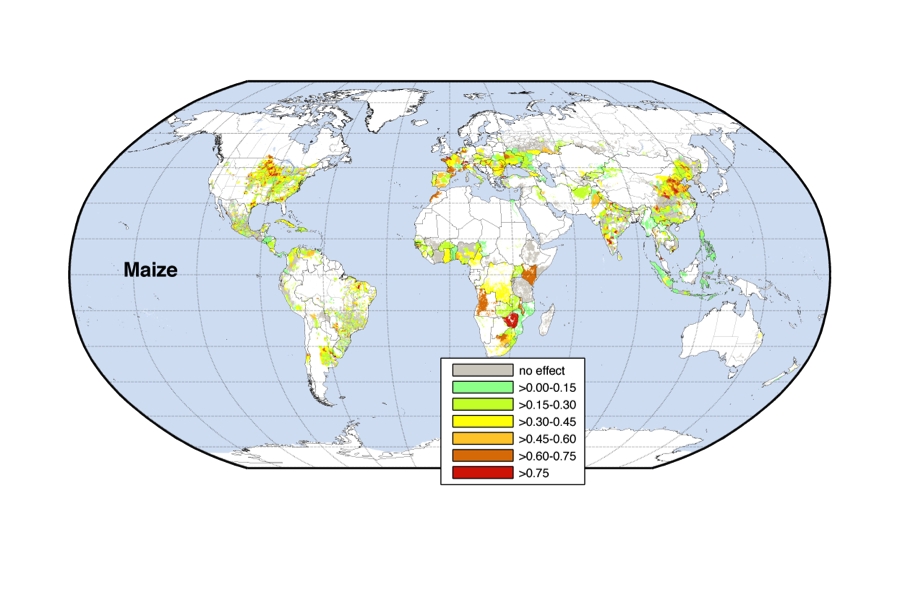 The connection between climate and yield variability differs around the world. It is strongest in the red areas and weakest in the light green and gray areas. Discovery of the huge but varied role of climate change in food production provides valuable insights for preparing for future conditions.
Print this page