Features Agronomy Corn
Seeding canola with a corn planter: The way of the future?

Choosing the right canola seeding rate is always a challenge. On the one hand, the high cost of seed means planting on the heavy side can cut sharply into your profitability. That said, canola seedling mortality averages more than 50 per cent, so seeding too lightly can seriously limit yield. Leading edge Alberta producers and crop experts hope they may be en route to a solution that allows significantly lower seeding rates – some say as low as 1.5 pounds per acre – while maintaining or increasing yield: the use of a precision vacuum corn planter.

“The big driver of looking at seeding with a corn planter is seed cost. Canola seed is sitting at $10, $12 per pound for good hybrid seed. As we introduce more traits, that price isn’t going to go anywhere but up. If you seed 5 pounds per acre but you only get 2.5 pounds coming out of the ground, you’re throwing $25, $30 per acre down the tube. If we can reduce the seeding rate and increase the number of seedlings coming up by getting more consistent depth and spacing, which is possible with a corn planter, you can pay for the machine in a reasonably short amount of time,” says Craig Shaw.

A canola producer in Lacombe, Alta., Shaw helped spearhead and is currently a key participant in a three-year corn planter research trial. Along with several other Alberta producers, Shaw is planting and recording on-farm results of various seeding rates and row spacing planted by both a corn planter and conventional plot seeder. Meanwhile, Agriculture and Agri-Food Canada (AAFC) research scientist Dr. Neil Harker is adding to the same study by conducting similar trials in formal research plots.

With support from the Canola Council of Canada, Alberta Canola Producers Commission, and Alberta Agriculture and
Rural Development, and funding from the Alberta Crop Industry Development Board and the now-defunct Alberta Reduced Tillage Linkages, the study intends to define the optimized seeding rate and spacing using a corn planter. Even more importantly, the study hopes to determine whether the lower input cost and/or improved yield benefit over a conventional plot seeder are significant enough to justify the purchase price of a planter.

Trial results to date have not proven as successful as hoped due to technical issues, from excessive water to heavy residue, and from hail damage to mechanical failure.

However, both Shaw and Harker remain optimistic.

“Though our results have been compromised by technical issues the last two years, we like what we’ve seen. When you look at a canola field seeded with a planter, it’s hard not to be impressed: generally it’s very, very uniform and the crop stages are very consistent, which has value in terms of herbicide and fungicide application,” says Shaw.

“I don’t know for sure that the benefits will outweigh the extra cost and trouble, but we remain open minded,” adds Harker. “I’m not a big proponent of reducing seeding rate because I think we’ve already got problems with going too low on seed. But maybe this technology will make it possible to still get a good stand even if you plant at what I’d usually consider too low a rate.”

They are not alone in their interest.

In 2013, Rocky Mountain Equipment in Balzac, Alta., conducted field trials in 13 locations using a 40-foot Case IH corn planter demonstration unit. At each location, five different trials were planted: 150,000, 225,000, 300,000, and 375,000 seeds per acre (approximately two pounds to five pounds per acre, depending on kernel weight), all fertilized with Alpine liquid fertilizer; and 300,000 seeds per acre with no fertilizer.

“In almost all scenarios, the 150,000 seed count produced the best yield,” says Brian Gabruck, a salesman with Rocky Mountain Equipment in Balzac and leader of the trials. “In a couple cases, the 225,000 seed count surpassed the 150,000 count by a little bit, but none of the results showed better yield from the higher seed counts.”

In addition to the lower seeding rates, says Gabruck, “plants were up out of the ground at least five days earlier, they flowered longer because they had more room to grow and less competition for nutrients, and the yields were better compared to conventional seeding.”

That said, Gabruck notes there remains a significant drawback with the current planter technology: because the equipment is not designed to dispense fertilizer, a second pass is required to get nitrogen in the ground. It is also possible that a planter’s lack of soil disruption may delay canola seeds from germinating because of decreased soil blackening.

Shaw is hopeful that the fertilizer limitation may be solved in a new, made-for-canola corn planter. Alternatively, as equipment manufacturers see growing producer interest in corn planters, it is possible they may be able to create a new kind of seeder that solves the depth control, metering and excessive air at delivery issues common in conventional seeders.

“We’re seeing signs that there are newer seeding technologies coming along that combine the benefits of planter and air seeding technology to improve precision for all crops. We’re probably still at the early stages for that, but equipment manufacturers are showing interest.”

Whether or not additional research ultimately reinforces Gabruck’s belief that a corn planter’s benefits outweigh its significant purchase price, Shaw sees value in the studies done to date.

“The corn planter has been a great research tool. If you can eliminate some of the seed placement issues and spacing issues that you normally see in most seeding systems, it reduces the variables and allows you to see where the shortfalls are in the current seeding system. A lot of guys you’ll talk to have never been overly happy with seeding systems for canola, and we’re seeing that technology can overcome some of the specific challenges of conventional seeders.” 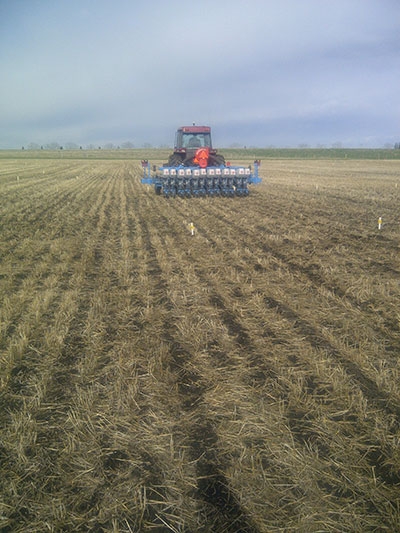