There is a direct causal relationship between rising water tables and increasing soil salinity in Western Canada. Dryland salinity results in susceptible soils when excessive rainfall elevates salt-laden groundwater, the water contained in the soil and substra. This water then moves into the topsoil through the process of capillary action, where it evaporates, accumulating salt that can negatively impact plant growth.

According to Rob Dunn, agricultural land management specialist with Alberta Agriculture and Rural Development (ARD), some prairie croplands are inherently susceptible to salinity due to their soil type, such as those soils that have developed on a shallow layer of glacial till over marine or soft bedrock.

Fields recognized by agronomists as being susceptible to salinity typically have depressions that are referred to as “saline seeps,” according to Dunn, while upland areas are usually less saline.

“During wet weather cycles there is more precipitation than the crop can use,” says Dunn. “That either runs directly into those low-lying areas, or percolates beyond the crop root zone in upland areas, so we get that shallow groundwater buildup, and it migrates into the seep areas, carrying additional soluble salt with it.”

Depending on the field slope, the salt-affected area can extend some distance from the actual seep, but may not be visible as a “salt crust” on the soil surface. But Dunn says that this salinity can often be found 20-30 centimetres into the soil in the surrounding landscape. This so-called “hidden salinity” can negatively impact crop growth.

Crops such as beans, peas, lentils, corn and potatoes are the hardest-hit, according to Dunn, while cereal crops, canola, mustard and flax are somewhat more tolerant to salinity. Research in controlled conditions has shown progressive yield declines with increased salinity for all crop types.

While the main concern in saline soils is plants’ inability to efficiently take in moisture, saline soils also have very high pH, which can affect some crops, and there are potential caustic or toxic effects from high concentrations of various solutes.

Currently, Western Canada, particularly Alberta and Saskatchewan, are experiencing a wet weather cycle, and this will aggravate some field salinity issues. That often becomes more apparent the spring following a wet year as water tables rise and seeps begin to form. According to Dunn, farmers in Alberta and Saskatchewan have been dealing with soil salinity for decades and have learned some strategies for managing the problem.

Salinity management
As increasing soil salinity is directly related to rising groundwater, Dunn says, the first step to correcting soil salinity is to identify the most likely groundwater source. “Does it appear to be from the field area surrounding the seep or could it be related to a regional groundwater system?” asks Dunn. “In most cases, the source is nearby and can be managed through perennial forages, which are much deeper rooted and intensive for water use.”

In recent years some farmers have experienced success with tile drainage in waterlogged soil areas in wetter regions, and irrigated areas, but this can be an expensive option, possibly requiring licensing in some jurisdictions.

Establishing a rotation which includes perennial forages that use a lot of moisture is a much more practicable solution, according to Dunn. Alfalfa is highly recommended because of its high water use and deep rooting ability.

“We recommend alfalfa because it can be an economically viable rotation crop if you’ve got a local market, [and it provides] an opportunity for you to dewater the subsoil in those upland field areas and eventually lower the saline seep water table,” says Dunn. “While alfalfa doesn’t tolerate high salinity, it helps to get at the groundwater issue that is aggravating those seeps. It’s a tool that has brought a lot of land back into production in some of the southern Alberta areas that are more susceptible to salinity issues.”

Ken Wall is a hydrology technician at Agriculture and Agri-Food Canada’s Salt Lab, located at the Semiarid Prairie Agricultural Research Centre (SPARC) in Swift Current, Sask. The Salt Lab is one of only two salt-tolerance research facilities in North America. Wall says there are other options for rotation crops that can help absorb excess moisture, including the perennial wheatgrass forage AC Saltlander. The variety, developed by the Salt Lab’s now-retired founder, Harold Steppuhn, is one of the most salt-tolerant grasses available in Western Canada. According to Wall, it demonstrates double the salt tolerance of alfalfa and barley.

“What [AC Saltlander] has going for it compared to tall wheatgrass is that it’s more palatable for cattle, and it can likely tolerate more flooding. It gives farmers another tool in the toolbox to combat salinity,” says Wall.

Although growers have to be careful in severely saline areas, Wall says the wheatgrass has demonstrated great success under the right conditions. “Once you get it established, it covers the ground and starts using up the water and has some pretty good capabilities for regenerating some of that land,” he says.

According to Wall, in wet weather cycles, continuous cropping is helpful in combatting excess groundwater, regardless of the crops growers choose to put in rotation. “If you get a year where you fallow, no water has been used at all, and if you get 12 to 14 inches of rain, you’ll fill up the profile to three or four feet,” he says. “When you continuous crop you break that cycle and you can dewater. If an area is too wet and salty your only option is to seed forages.”

Wall and his team are also working with Yves Castonguay, an ecophysiology scientist with Agriculture and Agri-Food Canada in Quebec, to increase salt-tolerance in alfalfa. “We’re doing some selections on three alfalfa varieties, and the aim is to identify DNA markers for salinity. Down the road the use of marker-assisted selection approaches should allow for more rapid advances in terms of increasing salt tolerance in alfalfa.”

Recent statistics show that of the 53.5 million hectares of agricultural land across Western Canada, it is estimated that 2.2 million ha are classified as severely saline. Additionally, 7 million ha of arable land and 3 million ha of permanent pasture are classified as slightly to moderately saline. Most annual crops grown in rotations on these lands display significant yield reductions at these low to moderate salinity levels.

“You can see the economic impact of increasing the salinity tolerance of cereals, pulses or oilseeds even just five per cent,” says Wall. “I believe these are the areas where most economic impact can be gained by concentrating research.” 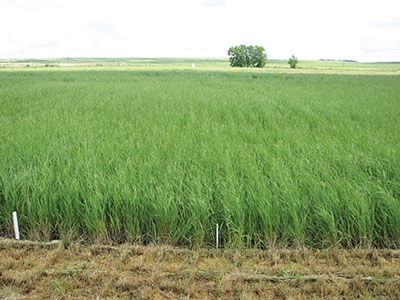 AC Saltlander green wheatgrass being grown in moderate to severely saline areas.  There is a direct causal relationship between rising water tables and increasing soil salinity in Western Canada.
Print this page


Related
Better soil health reduces fertilizer use and increases yield
Salinity solutions
Mining the soil for data: The impact of cropping systems on soil health
Where did the salinity come from?