These days, dry beans that get broken or cracked during combining or cleaning are culled from the food stream and put into low-value uses. But Ontario researchers are working on an exciting, environmentally friendly, higher-value opportunity for bean culls – bean bioplastic! 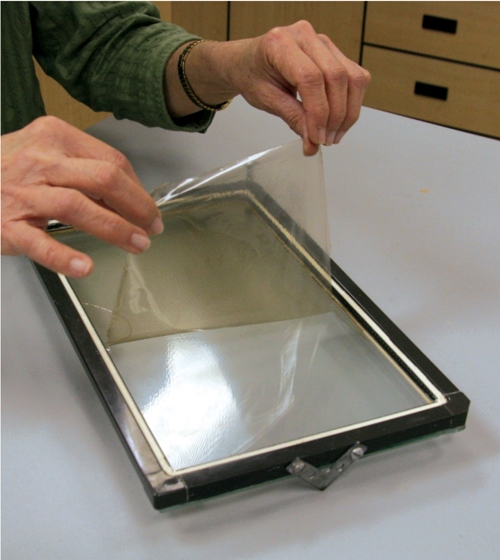 Dr. Peter Pauls, chair of the Department of Plant Agriculture at the University of Guelph, is leading this research. His lab focuses on such areas as molecular characterization of plant traits, plant bioproduct development and dry bean breeding. All those areas are important for the development of bean plastic.

Pauls explains how he and his research team became interested in developing bean plastic: “We’ve been working with the Hensall District Co-operative, a company that cleans and packages beans and markets them around the world. We’ve visited the plant a number of times and we’ve seen the culls that come from it. They are mostly cracked beans so they aren’t appealing for consumers, but they are perfectly good in terms of their functional characteristics.”
The researchers knew from other studies that bioplastic could be made from any crop with protein in it. Since beans are a good source of protein, they decided to give bean plastic a try.

The science behind bean plastic
Some of the key players on the bean plastic team at the University of Guelph are Dr. Loo-Sar Chia, with expertise in protein chemistry and bioproduct development, Dr. Loong-Tak Lim, a professor in the Food Science Department, and graduate student Muhammad Arif, who worked on using soybeans to make bioplastic.

Pauls and his team extract protein from different types of beans, mix the protein with glycerol (an edible plant product), and make it into plastic films. One aspect of their work involves testing these films to determine their physical characteristics, such as strength, permeability to water and elasticity, because such properties are important for the end use of the plastic.

The researchers can make thin, flexible plastic films that can be used in a variety of ways. One great idea is to make edible food packages. For instance, the plastic can be formulated so that it’s water-soluble and can be formed into pouches to hold dried soup. A consumer would place a soup pouch in a bowl and add hot water, and the pouch would dissolve and become part of the soup.

Other possibilities include edible wraps for foods such as sausages, capsules for powdered medicine, and edible sprayed-on films to preserve fruits and vegetables. Pauls notes, “Some of the uses, like capsules for pharmaceuticals, would provide a plant-based alternative to capsules made from animal protein, for instance, for people who have allergies to certain products.”

Bean plastic can also be made so that it’s more rigid, which allows other uses. “For instance, inside a chocolate box, there’s often a tray made of shaped plastic that holds the chocolates. We can thermoset these films so they hold their shape to make those types of trays,” says Pauls.

Another component of the research is to analyze the protein composition of different dry beans and investigate how that influences the properties of the plastic. “Different bean sources give us films with different physical properties. The determinant seems to be the protein composition,” explains Pauls. “What we extract from a bean is really a mixture of a number of different discrete proteins. Each bean has a little different protein composition – they usually have a very similar overall ‘pattern’ but some components might be a little higher in one bean and a little less in another. Since each individual protein has its own specific physical properties, the collective at the end is a little bit different from one bean to the next.”

Pauls and his team are building their understanding of which particular bean protein component gives which particular physical characteristic to a plastic film. For example, they have been examining several lines of beans that lack certain classes of proteins, and are finding some interesting flexibility and elasticity characteristics in the resulting plastics.
As well, the researchers have been determining the variations in protein composition in bean germplasm from a wide range of sources. They hope to introduce modified protein characteristics into new bean varieties through the joint Agriculture and Agri-Food Canada (AAFC) and University of Guelph bean breeding program, located at the University of Guelph and led by Pauls and Dr. Ali Navabi of AAFC.

“We’re exploring crossing that material into our conventional bean varieties to see if we’re able to preserve their yield potential and other important traits, while adding the potential for a plastic end-use to give them an economic advantage,” says Pauls.

Economic considerations
“Right now bean culls are sold for a fraction of what normal beans would be sold for. If there were an economic benefit to the culls, then that would add to the attractiveness of that particular variety.”

The next stage in developing the plastic production aspect of the research involves scaling up the process. “So far, most of our tests have been done on small-scale preparations of the plastics in a lab. We have a bioproducts centre in our department, and our next step will be to make these films in a larger format, such as a long sheet or a long roll, and in a larger quantity. Then we’ll do some of those tests to measure their physical properties. I think once we have that, we’ll have a better way of talking to companies who might be interested in the manufacturing end,” says Pauls. “So I’m optimistic, but we still have a ways to go.”

Bean plastic has a positive potential for both the environment and the bean industry. The plastic comes from a renewable source and it’s biodegradable. Also, some of the ideas for bean plastic uses, like those edible pouches for dried soup, offer a novel way to help address the environmental issue of packaging wastes. As well, the bean plastic process targets a low-value byproduct of bean processing and adds value to it – extra value that can ultimately be passed along to bean growers.

Brad Chandler, commercial business manager for the Hensall Co-op, is interested in the potential of bean plastic. “We’re always looking for new opportunities that take any of the byproducts and add value that we can pass on to our growers or make contracts more attractive to our growers. In all parts of our business we’re trying to bring all the stakeholders together to encourage communication and challenge one another as to how we can bring added value not only to the growers, but also to our end users. In this case, Peter Pauls saw an opportunity with beans that don’t have much value. If we can get this opportunity going, it will bring value to that byproduct and hopefully we’ll increase the contract value for growers and help the bean industry.”

Chandler adds, “I think the timing is right for this idea. Everybody is looking at the environment. There are already examples of plant-based biodegradable plastic jars and containers. It’s a growing trend. If edible beans could become part of that value chain, that would be great.”