Although drought severely impacted corn yields in some parts of Ontario, yields were actually better than expected in many areas of the province in 2012. Are there things growers can learn from corn’s performance this past year that could help deal with the next curve balls thrown by Mother Nature? 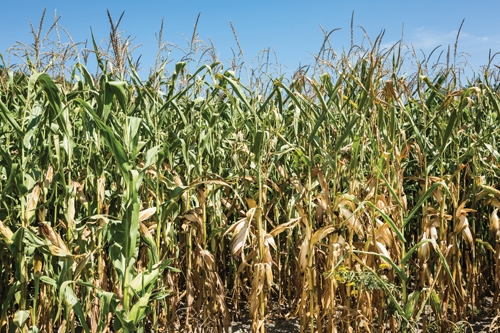 Corn yields in Ontario in 2012 ranged from excellent to very poor. Although drought severely impacted corn yields in some parts of Ontario

A look at yield patterns in 2012
Statistics Canada, in its final estimates for 2012 crop production, reported that Ontario corn production reached a record 8.6 million tonnes from a record harvested area of 2.2 million acres. That works out to an average yield of 153 bu/ac, which is very close to Ontario’s current five-year average corn yield of 150 bu/ac.
But many Ontario growers experienced far-from-average yields.

“I think overall the provincial average is strong, but yields were quite variable,” says Steve Denys, vice-president of sales and marketing with PRIDE Seeds. “We had many farmers who had possibly the highest yields they may see in their lifetime, because they had rain along with the heat. And then we had all the way to growers in severely dry pockets who had probably the worst yields they’ll see in their lifetime. There was a severe pocket in Renfrew County near Ottawa and another one through Simcoe, Delhi, Elora and the Guelph area, where growers had drought combined with high heat. So we had yields ranging from 40 to 250 bushels per acre.”

The results from the Ontario Corn Committee’s 2012 hybrid trials at 21 sites across the province show some of that wide range in yield. At one extreme are the Ottawa and Pakenham trials, which had to be discarded due to the high level of variability caused by very dry weather. At the other end of the spectrum are the southwest trials, which had excellent yields.

“The average of the southwest trials, which are at Ridgetown, Tilbury and Wallaceburg, exceeded the 2010 average, and in 2010 we thought we had climbed to new heights for corn yields. The 2010 average yield for the three sites was 238 bu/ac, while in 2012 it was 249 bu/ac,” says Greg Stewart, corn industry program lead with Ontario Agriculture, Food and Rural Affairs. He adds, “They just kept getting rain whenever they needed it this year!”

Stewart points to another interesting comparison: the 2012 trial results for Wingham and Elora. These locations grow the same hybrids and have similar soils, but in 2012 the average yield was 226 bu/ac at Wingham and 175 bu/ac at Elora.
“Wingham received about four inches more rain than Elora over the course of the season, including a nice little bit more rain in July. Those four inches of rain resulted in about a 50-bushel yield
increase compared to Elora. That’s about 12.5 bushels of
increased yield per inch of rainfall.”

Reasons for better-than-expected yields
Looking at corn performance in 2012, Monsanto’s technology development lead for Eastern Canada, Derek Freitag, says, “Yields looked surprisingly good but what that means differs depending on where you were. In areas with severe drought stress, growers were surprised that corn yielded 70 or 80 bushels when it really didn’t look like there was anything there.
In areas with moderate drought stress, growers were pleasantly surprised to find they reached the 180- to 200-bushel range. And in the areas with decent moisture, we had growers harvesting their best crop ever.”

Along with the crucial help of timely rains, a couple of other factors helped corn crops to better withstand heat and moisture stress and achieve those surprisingly good yields.

One factor is that corn crops got off to a very good start. “The dry April and May in 2012 set us up for excellent planting conditions and made the root systems develop very nicely in the early going, enabling the crop to withstand relatively dry conditions across a fair bit of the growing area,” explains Stewart.

Another factor is improved hybrids. Freitag says, “The progress in corn hybrids has been almost unimaginable as far as their ability to tolerate stress. …Our breeding program has incorporated a lot of traits from other world areas that help, whether it’s disease tolerance in wetter years or drought tolerance or heat stress. It’s also the adoption of biotech traits [to protect against insect pests and herbicide damage]. So we’re putting the corn crop through a lot less stress nowadays. It’s kind of ‘the straw that broke the camel’s back’ scenario where it takes a lot more straws to break the camel’s back nowadays because the camel is a lot stronger.”

DuPpont Pioneer area agronomist Blair Freeman says, “If you look at 1988, a year with extreme drought stress when corn yields suffered, if a grower could have had a 150-bushel crop back then, he would have been thrilled. Obviously we have been raising the bar on corn yields in stressful years.”

He gives the example of Bt corn, a trait that people don’t necessarily think about in connection with drought stress. “Bt corn can indirectly improve a hybrid’s ability to withstand moisture stress conditions. Corn borer can damage the vascular
system of an individual corn plant and its ability to transport water within the stalk. This damage leaves the plant in poor shape to handle future moisture stress. Bt corn is less prone to corn borer damage and should be able to better withstand moisture stress as a result.”

Freeman notes, “Breeding programs often plant inbreds at very high populations to sort out the genetics that can withstand stress, and they target things like silking and pollen-shed synchrony. So, as we move through time, we’re getting hybrids better able to pollinate [even in stressful conditions].”

Dry conditions may affect this synchrony by shortening the length of time that a tassel sheds pollen and by delaying silk emergence; sometimes the combined effect may mean that pollen shed is over before silk emergence. “With corn you have one kick at the can to set grain – to shed pollen and have the silk there to be receptive. If you don’t have that synchrony, you can have a 50-bushel crop rather than a 150-bushel crop, even if the rest of the season goes right,” says Freeman

What was learned from 2012
Corn performance in 2012 reinforced the value of some key practices and pointed to some opportunities for fine-tuning to deal with weather stresses.

“Using multiple hybrids with multiple flowering dates, planting as early as agronomically sound, and using multi-year data to choose hybrids – those are probably the key messages we would like to take to our growers over the winter months,” says Freitag.

Freeman advises, “I think 2012 is a lesson in risk management and diversifying your [hybrid] portfolio to be successful even in stressful years. If you can get a package of hybrids together that will spread out maturities and spread out your silking window over a week and a half rather than just a couple of days, you will be better able to weather different stresses.”

He notes, “This year in many places heat and moisture stress tended to get worse as the summer went on, so some of the later silking hybrids tended to be penalized in some situations. But in another year the situation could be reversed. So all you can do is spread out your silking window and hope for the best.”

Growers shouldn’t overemphasize 2012 data when choosing their hybrids for 2013; using multi-year data is as important now as in any other year. Stewart says, “Evaluate all the data you can get your hands on – your on-farm data, the data your seed company has, the public performance trials – and try to pick the highest yielding hybrids for your area.”
Just as corn growers learn from multi-year data, so do corn breeders. “In breeding programs, decisions on what
hybrids are going to go forward are based on multiple years of data.

The heat and moisture stresses of 2012 will add an important chapter in terms of stress response to the book that breeders look at to make decisions about which lines they want to continue with to go towards commercialization,” explains Denys.

For Denys, 2012 showed the value of three basics for corn production. “Number 1 is to make sure the ground is in good shape when you plant and that planter maintenance and those types of things are done before the season. Next is the value of the genetics. I look at my own farm and even though there was some moisture stress in 2012, the genetics helped me get a better yield than I expected. Then the third factor is in-season fungicide sprays, especially applications around pollination time. I believe they give a disease control benefit as well as a plant health benefit, adding to the yield.”
As for what Stewart learned from his corn research in 2012, he gives an example from his nitrogen trials. “The weather influences how much nitrogen is mineralized out of the organic matter in the soil naturally, without the farmer adding any fertilizer. In 2011, we had a cool, high rainfall in April and May, and the soil nitrate tests showed that the amount of nitrogen coming out of the organic matter was quite low. So farmers needed to add more nitrogen to meet the crop’s demands.

“In 2012, we had relatively low rainfall in April and May and quite warm conditions, so we got the organic matter warming up and kicking out higher than average amounts of nitrogen. So in 2012, farmers needed to add less nitrogen because of the greater supply coming out of the soil’s organic matter.” Stewart advises, “To do a good job of getting the nitrogen rate right for your field, you have to consider the previous crop, soil texture and yield expectation to get a snapshot [of the field’s nitrogen status]. But to really get it right, you then have to take into account the influence of April and May weather, and our only way of really capturing that is through a soil nitrate test. Then you add the information from the soil nitrate test to the snapshot, and make an adjustment.”

As Freitag says, when it comes to the weather, “the only thing we can almost guarantee is that next year will be different.”

The ups and downs of 2012 underline the importance of spreading your risk by growing multiple hybrids with multiple maturities and silking dates, of doing everything you can to give the crop a good start so it
can withstand stress – and of having some luck with timely rains.