Since 1988, Peter Johnson has been has talking about the advantages of phosphorus (P) application in wheat. As the Ontario Ministry of Agriculture, Food and Rural Affairs’ cereal specialist, Johnson has studied the impact of P on wheat yields, crop uniformity and resiliency for almost 25 years and he is still astounded that approximately 10 percent of Ontario growers still don’t apply fertilizer to their wheat at all. Surprising as well, is the popularity of broadcasting starter fertilizer on wheat fields. 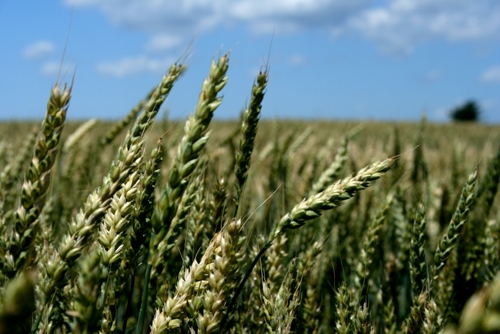 Applying P in a seed-placed starter fertilizer on wheat

“Broadcast P left on the soil surface increases the risk of movement into watercourses,” says Johnson. “Not only can this be an environmental issue, but a rainfall can wash it away, causing growers to lose the money they invested in fertilizer.” Potassium is lost in two ways: particulate P, which is nutrient loss from surface runoff, often associated with soil erosion, and soluble P, which is nutrient loss from leaching.

Loss of P from leaching into waterways is less common in Ontario, but particulate P movement can be a real issue and the resulting transport of P in soil runoff contributes to freshwater eutrophication. By definition, eutrophication is the process by which excess nutrients, such as P, are dumped into bodies of fresh water and stimulate excessive plant growth. In Ontario, increased P levels cause algae blooms. When algae blooms die, either from nutrient shortage or from cold weather in the fall of the year, they remove oxygen from the water to decompose. This leads to reduced oxygen levels for the remaining plants and fish in our Great Lakes and associated waterways. These problems are often aggravated by the proximity of streams and lakes to agricultural land.

Because P is such an important nutrient to wheat production, reducing P loss should be an important factor in field management decisions. “In-field dry starter fertilizer application is a much more environmentally friendly and efficient way to handle phosphorus since there’s less chance of surface water runoff,” says Anderson.
Reducing dissolved P loss from leaching and runoff involves implementing practices that maximize crop P uptake, such as subsurface placement of fertilizer. “It’s simple: seed-placed fertilizer reduces the risk of particulate P loss since the fertilizer isn’t on the soil surface,” says Johnson. “And it doesn’t increase the risk of soluble P either.”

Particulate loss from erosion accounts for a significant percentage of overall P loss from cultivated land. And a recent shift away from conservation tillage practices is resulting in a return to more intensive tillage and increased soil erosion and nutrient losses into the Great Lakes. “Growers have access to the widest array of tillage tools ever seen to loosen soils and create ideal seedbeds,” says Johnson. “There’s no excuse to go back to mouldboard ploughing and intensive cultivation.” Overall, soil loss, particulate P and total P losses can be reduced using conservation tillage or no-till methods when compared to conventional tillage under Ontario conditions.

Seed-placed success
Seed-placed dry starter fertilizer could almost be a grower’s secret to success, especially if P application is emphasized. The economic benefits of increased yields, minimizing P loss and stronger crop stands are sound arguments for investing in the right fertilizer equipment for in-field application, says Johnson, not to mention the associated environmental benefits. Seed-placed dry starter fertilizer and the advantages of additional P nutrients on wheat shouldn’t be a surprise to wheat growers, but sometimes a reminder can help make good field management decisions even better.


Related
Preventing phosphorus losses over the winter
Breeding for more efficient phosphorus use in winter wheat
Ontario winter wheat harvest is complete
Winter wheat establishment: it’s all in the details