Australian soil ecologist, Christine Jones, has been recognized internationally for her work with farmers and ranchers implementing land management practices that enhance soil biological activity and productivity. In 2015, the International Year of Soils, Jones was on a world-wide speaking tour that included several stops in Canada and the U.S.

Jones says several comprehensive research studies have shown that today’s fruits, vegetables and meats are substantially lower in minerals and trace elements such as copper, calcium, iron, magnesium and potassium than they were 70 years ago. She asks: “How is it that we are using more and more high analysis fertilizer in conventional farming, but getting fewer and fewer nutrients in our food?”

This decline in nutrients is not seen in foods grown on biologically active soil, Jones says. Most “deficiencies” in plants are due to conditions not being conducive to nutrient uptake. “It is becoming increasingly recognized that the addition of inorganic elements to correct these so-called deficiencies is an inefficient practice,” she notes, adding that too much of the nitrogen fertilizer being applied is ending up in runoff water and causing poor water quality. “Sixty to 90 per cent of nitrogen applied to the soil is wasted.”

Jones says we should be focusing on the biological cause of the dysfunction, which is usually microbial in nature. “Nutrient deficiencies are usually due to the depletion or absence of important functional groups of soil microbes.”

The solution is to create soil conditions that promote the growth of a diverse and active microbial community. Research has shown 85 to 90 per cent of nutrient acquisition by plants is aided by soil microbes, so agriculture’s success depends on “appropriate microbe management.” In simple terms, microbes need something to eat and somewhere to live, Jones explains. “Most microbes that are involved in nutrient acquisition are plant-dependent and rely on the carbon compounds exuded by the roots of actively growing green plants.”

According to Jones, 90 per cent of microbes found in soil are living in close proximity to plant roots. Every plant exudes different carbon compounds that feed different types of microbes so it’s essential to have different types of plants growing for as much of the year as possible. “If there is only one type of crop, then you will only feed a portion of the soil community,” she notes.

Mycorrhizae, a type of fungi that live in association with plant roots, function as an extended root system for the plant, allowing the plant to access nutrients from a much larger volume of soil. Mycorrhizal fungi provide a major highway in terms of transporting carbon from plants to soil. These beneficial fungi form symbiotic relationships with 80 to 90 per cent of all land plants. The plants supply sugars produced during photosynthesis to the fungal partner and the fungi effectively increase the surface area of the plant’s roots.

Jones says the impact of the mycorrhizae is significant. The thread-like branches of one single mycorrhizal fungus can be as large as a football field. Plant root exudates are composed of thousands of different kinds of chemicals, each plant producing a unique blend of sugars, enzymes, phenols, amino acids, auxins, gibberellins and other compounds. These vary over time and have differential effects on soil microbes and hence on plant nutrient uptake and soil structure.

Researchers have seen that neighbouring plants, even different species, can be connected through a mutual fungal network, known as a common mycorrhizal network. There is increasing evidence that plants and soil microbes communicate with each other via these networks.

The key, Jones says, is to maximize photosynthesis. “Everything that lives in the soil, the trillions of organisms, must ultimately get their energy from the sun. Photosynthesis is the process whereby light energy is captured and transformed to biochemical energy by green plants. Photosynthesis sustains most of the life on earth. We are all running on light energy.”

Indeed, photosynthesis is the base of the pyramid of life, Jones emphasizes. “Green plants capture sunlight and carbon dioxide, making carbon compounds that build soil. Fertile topsoil is a product of photosynthesis and microbial resynthesis.”

In addition to aiding nutrient acquisition, soil microbes have many other positive benefits for soil health. These include improved soil structure, improved water holding capacity and drought tolerance, and better resistance to erosion.

Life in the soil provides the glues that enable soil particles to stick together into pea-sized lumps called aggregates. The spaces between the aggregates allow soil moisture to infiltrate more easily and moisture absorbed into soil aggregates is protected from evaporation so that the soil remains moister for longer following rain or irrigation.

Unfortunately with modern farming practices, many of the microbes important for soil and plant function have gone missing, Jones says. However, there are several management practices that farmers can follow to enhance soil biological activity.

Enhancing the diversity of plants grown will enhance the diversity of soil microbial communities, Jones says. She recommends farmers have an actively growing crop or ground cover for as much of the year as possible, grow multi-species cover crops and seed companion crops along with their main crops.

She also recommends avoiding aggressive tillage. Repeated and/or aggressive tillage increases the susceptibility of the soil to erosion, depletes soil carbon and organic nitrogen, and is highly detrimental to beneficial soil microbes as well as invertebrates such as earthworms.

However, Jones warns that farmers need to allow a transitional period to convert from a chemically intensive system to a biologically active system. “It takes time for soil microbial populations to become re-established,” she says. 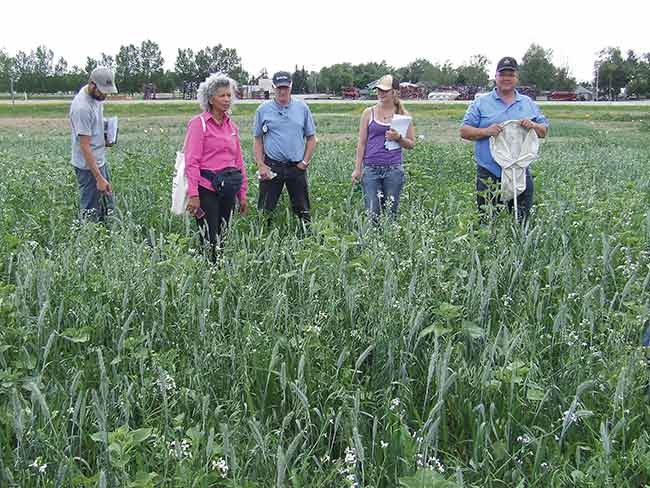