Recent discoveries by researchers at Agriculture and Agri-Food Canada (AAFC) are shedding new light on how genes are turned on and off. Switching genes on and off is critical for improving crop traits, so these research findings have exciting implications for crop advances in the future. 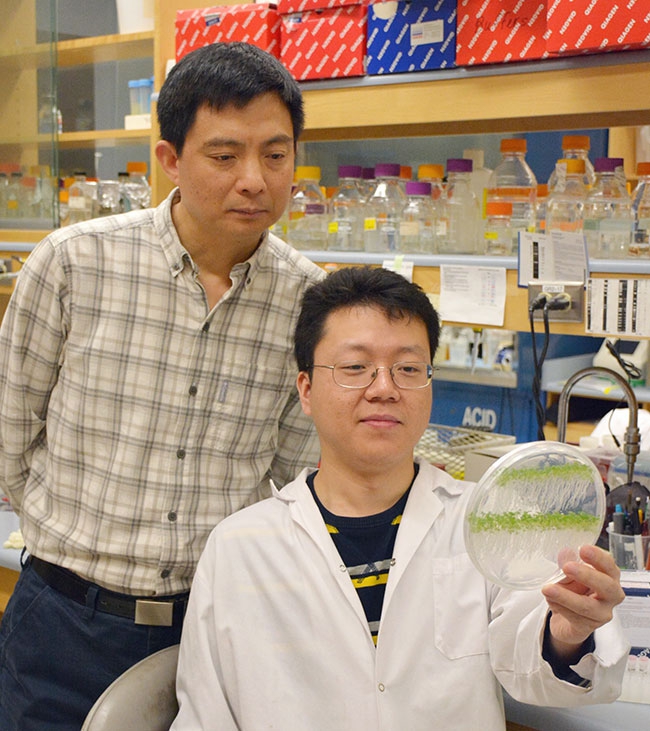 A quick look at the science
The research relates to chromatin regulators, which play a crucial part in gene regulation as DNA is compactly coiled into the nucleus of a cell.

“All the DNA in the cells of plants or animals is not naked. It is wrapped up around proteins, mostly histones, and it is very tightly organized within the nuclei of the cells so the DNA can fit within the space,” explains Yuhai Cui, the research scientist at AAFC’s London Research and Development Centre who led this study. This tightly packed structure is called chromatin.

Cui and his team have made two important contributions to solving this puzzle.

First, they determined that a certain chromatin regulator can actually bind directly to the DNA. “This is a surprising finding, and that is why some of our colleagues consider this as paradigm shifting,” Cui says.

Why this matters for crop improvement
“Epigenetics has been a hot research area for the past 10 or 15 years. Twenty years ago, most molecular biology focused on just the DNA and the transcription factors that can bind to the DNA directly. But within the past 15 years, it has become widely realized that you have to regulate the chromatin structure and that chromatin regulators play a very important role,” Cui says. “Their role in crop improvement is everywhere because, in order to improve a crop, you need to regulate gene expression to control the on and off of a particular gene.”

In plants, for example, chromatin regulators are key players in the expression of genes related to disease resistance, drought tolerance, heat tolerance, insect resistance, seed characteristics, plant growth and development, and many other traits – almost every plant trait you can think of.

Cui’s team looked at the functioning of those two chromatin regulators in Arabidopsis thaliana, a plant species in the mustard family. Arabidopsis is a small plant with a fast life cycle, and its genome is small and has been sequenced, so researchers use it as a “model” plant – they learn about how this plant works and then they transfer that learning to other plant species. The two chromatin regulators in Cui’s study are known to influence many different genes, so the findings could have wide-ranging applicability.

Cui’s team determined that the two regulators target a specific DNA sequence. Potentially, scientists could use this understanding to improve crop plants in the future using gene-editing technology. For instance, researchers might insert or manipulate a target DNA sequence in a gene in order to direct a certain chromatin regulator there to control the expression of that gene.

The first chromatin regulator in Cui’s study is an epigenetic eraser. Epigenetic erasers are able to remove epigenetic marks, which tell genes to switch on or off. The eraser in Cui’s study is able to home in on that little DNA sequence and remove an epigenetic mark that represses gene expression. You can imagine how such an eraser might be helpful for crop improvement. For example, let’s say the crop plant you’re trying to improve has a gene for resistance to a disease, but the gene has a repressive mark that silences it. If you could target the appropriate part of the DNA with an epigenetic eraser, then you could erase that mark and produce a plant with
better resistance to the disease.

Overall, the study’s results could have far-reaching implications. “Our contribution is opening up new doors. These important chromatin regulators control many genes across the genome and they can bind to the target by recognizing a specific DNA sequence. This opens up the opportunity that we can control targeting and gene expression by changing or introducing specific DNA sequences,” Cui says. “This research gives us more tools in the future to manipulate crop traits.”