Fusarium is an old pest in Manitoba’s Red River Valley but it is becoming a big new pest about 500 kilometres northwest, in the Swan River Valley. To get ahead of the disease game, seed grower Wayne Alford went shopping for nozzles to provide better coverage.

“I wanted to improve my application of fungicides. I did some research, and saw an article that mentioned asymmetrical TurboDrop nozzles,” says Alford. “Two seasons later, I’m a happy customer.”

TeeJet has 25 types of sprayer tips available for broadcast applications with boom-type sprayers. The TeeJet AI3070 produces two wide-angle, flat spray patterns. To maximize coverage, the lead nozzle is tilted 30 degrees forward to hit vertical, exposed targets such as wheat heads. The back nozzle, tilted 70 degrees to the rear, applies a heavier rate against the back of the retreating heads. Drift-resistant drops are produced with the use of a venturi design.

In normal operation, the travel speed of the sprayer moves droplets along with it. They tend to deposit in the driving direction. Because of this, the coverage of the backside of the vertical wheat heads tends to be weaker.

Several manufacturers have developed bodies that will support two nozzles (or jets) that spray forward and backward from the vertical, typically at 30-degree angles.

A limitation of a double nozzle is that as you travel faster, the spray deposit on the forward-pointing nozzle increases while the contribution of the backward-pointing nozzle decreases. As a result, low speeds were advised to take advantage of this design.

According to Wolf, design engineers decided it wasn’t necessary for the angles to be identical, and that a variation was better for faster speeds. “The asymmetric design is intended to allow these faster travel speeds,” he notes. “To even out the playing field, they said let’s decrease the contribution of the front nozzle and increase the angle of the back nozzle. More help is required to keep drops moving back to hit a target that they are actually moving away from.”

In 2012, Wolf did trials with the TeeJet AI3070 to see if the deposit pattern changed with travel speed and to see if there was an impact from boom height. He predicts that results probably would be similar with the TurboDrop Asymmetric nozzles.

Using a vertical plastic drinking straw target with similar dimensions to a wheat head, they measured results separately for the forward- and backward-pointing nozzles at speeds between eight and 16 kilometres/hour in increments of 2 km/h.

Previously, with a non-asymmetric design, they determined that increasing the travel speed increased the amount of deposit from the forward-facing nozzle.

However, boom height is a factor in coverage. In earlier studies with single nozzles that were angled forward, was there was a significant impact of boom height. The angle of the nozzle was relatively unimportant while the boom was high, and deposits on vertical targets were low. When the boom was closer to the target, the angle became quite important, increasing deposits significantly.

“With the asymmetric design, we also found that we could increase deposition on the vertical target significantly by keeping the boom low,” notes Wolf. “When you have a high boom, the angle the spray leaves the nozzle at very quickly becomes irrelevant. Air resistance and gravity redirect the spray just to fall vertically, or move with prevailing winds. But when you spray very close to the target, the spray is still moving forward and backward as intended.”

As a result, with asymmetric nozzles, a boom height controller is a very practical option. The operator can keep the boom low, without hitting the ground, and take advantage of the lower boom height.

“Our key conclusions from the study are that maintaining a low boom and having the spray reasonably coarse allows the double angle and the asymmetric angle to be beneficial,” says Wolf. “It is most beneficial in the fungicide world, where you are trying to hit a vertical target.”

The new design, however, did not produce any benefits in coverage on horizontal targets such as broadleaf crops and weeds. As a result, benefits are more likely for fungicides than herbicides.

First, he checked the nozzle performance using water-sensitive paper to reveal the actual spray pattern at head level in his wheat. The spray pattern was different from what he had seen with other nozzles. Drops from the forward nozzles were a little smaller; drops from the rear nozzles were a little larger. As long as it wasn’t windy, they covered both sides of the sprayed paper.

Alford ran his own pressure test as well, with different speeds. He found the asymmetric spray maintained its pattern across a wide range of nozzle pressures. “The Asymmetric will work at anything from 10 g/ac and 12 m.p.h. up to 20 g/ac and 6 m.p.h. while the spray pattern and droplet size stay relatively consistent,” he says.

“I followed the directions for fusarium control: spray at six or 7 m.p.h. at 15 g/ac of water and recommended pressure. We had very good results. Good coverage. Minimal plugging. My seed crops weren’t perfect, but the fusarium levels on my seed wheat were certainly very much lower than I had in past years. The two years of experience I have had have been very positive.” 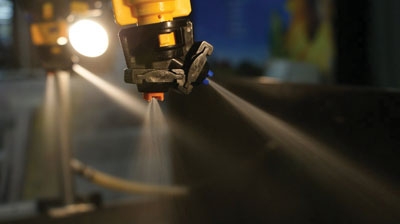 New dual-fan nozzles are particularly well suited for applications of fungicides with high-clearance sprayers. Fusarium is an old pest in Manitoba’s Red River Valley but it is becoming a big new pest about 500 kilometres northwest