As a business, farming is all about efficiencies. The more efficient the operation, the stronger the bottom line – not to mention other benefits of efficiencies like labour, yield, equipment usage or feed conversion in livestock. Tom Wolf, research scientist with Agriculture and Agri-Food Canada, spends his days researching efficiencies in spray technology. His theory is the more efficient the spray application of pesticides, the better they will work. 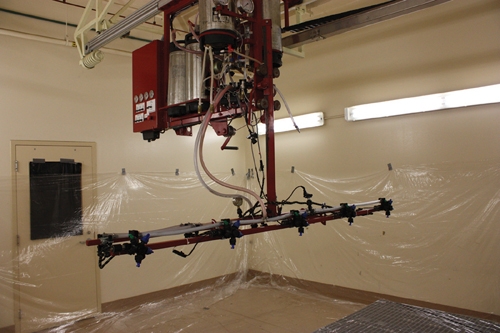 The track room in Saskatoon containing spray boom with which the testing is done. As a business

Testing new technology
Maximizing pesticide potential means applying the pesticide exactly where it’s intended on the target plant, or to specific parts of the plant. Wolf explains that reducing drift and increasing spray deposition are the two most important factors to maximizing pesticide spray potential. Drift is determined by a number of factors, such as weather, boom height and travel speed. But what he’s most interested in is getting the best deposition, or pesticide placement, on targeted areas of the plant, because better deposition increases the effectiveness and quality of the spray. That’s why Wolf recently tested a new type of nozzle, the TeeJet AI3070, an asymmetrical double nozzle. Wolf and his team set out to determine how this new technology could increase pesticide deposition and help farmers create efficiencies in spraying while maximizing their pesticides. Wolf and his team at the Agriculture and Agri-Food Canada Saskatoon Research Centre in Saskatoon, Saskatchewan, are constantly testing new products and practices to help control the variable factors that reduce pesticide effectiveness. “There are so many factors we can’t control when spraying, so we rely on new products and testing to help,” says Wolf. “Double nozzles provide a greater diversity of droplet direction, hopefully leading to greater overall target coverage,” continues Wolf. Unlike conventional nozzles that only spray in one direction, double nozzles can spray both the front and back side of the target plant. Asymmetric nozzles, the latest development in double nozzles, further maximize the ability to spray in two directions by optimizing the leading and trailing nozzle angles.

Research testing of the AI3070 focused on total spray deposition over a range of travel speeds, boom heights and nozzle angles. Results were measured by the amount of pesticide spray deposited on the target.
The results indicated the asymmetric nozzle provided a more uniform application of pesticide spray when compared to traditional double nozzles. Test results concluded the nozzle was most effective at a lower boom height. Wolf’s team measured pesticide spray application at boom heights within the possible range for commercial applicators at 30 inches, 20 inches and 15 inches. The team concluded the lowest boom height, 15 inches, performed significantly better than the other heights tested and provided the greatest pesticide deposition on vertical targets.

“Deposition is not just a function of the spray nozzle technology, but the ground speed too,” says Wolf who also tested the effectiveness of the technology relative to ground speed. Even spray application of both the front and back side of the plant has traditionally been a challenge with double nozzles, with the forward nozzle depositing more than the backward-facing nozzle. Wolf’s study measured ground speed at 8, 10, 12, 14 and 16 kilometres per hour with results showing that the asymmetric nozzle provided uniform application at all speeds. In previous work with traditional double nozzles, faster travel speeds tended to decrease deposit uniformity.

Trials were also conducted adjusting the AI3070 nozzle angle to test the spray deposition of the front and rear sides of the target. Nozzles were tilted 10 degrees forward or backward off the intended vertical configuration. Results showed the 30-degree forward-facing and 70-degree backward-facing angle combination intended by TeeJet provided the best performance. Tim Stuenkel, global marketing and communications manager with TeeJet Technologies, explains the 30-degree angle forward and 70-degree angle backward facing are recommended by the manufacturer and were chosen to optimize surface coverage of the grain head in wheat and other small grains, while still providing control deeper in the canopy. The company also incorporated air induction technology to reduce fines and improve drift, resulting in a more efficient and higher-quality spray.

Maximizing application on your farm
“Our research shows the asymmetric double nozzles achieve the best pesticide deposition when used at a low boom height, and [they appear] to maintain good performance at fast travel speeds,” says Wolf.
“If farmers apply these results they will maximize the benefits of the new nozzle’s design.” And double nozzles are likely to provide the most benefit when applying fungicides since targeted coverage is especially important at specific crop stages.

“With more fungicides being applied in general in North America, along with the need for better control of diseases like fusarium in wheat, we’ve definitely seen a growing demand for twin-pattern, or double-nozzle, spray tips,” says Stuenkel. In fact, the AI3070 design was based in part on the results of university studies on spraying fusarium fungicides in wheat.
Double nozzles are manufactured by a variety of companies including TeeJet Technologies, Greenleaf Technologies, Hypro and Air Bubble Jet. Wolf recommends consulting manufacturer information for more details and product labels for nozzle recommendations.

“Good application contributes to better pesticide performance, especially those that depend on sufficient spray deposition on targeted areas of the plant,” says Wolf. Asymmetric double nozzles have only been around for a few years and Wolf believes the more they are tested, the more information will become available, enabling growers to make important management decisions, maximize their pesticide spray and efficiently run their operations.