If your corn crop isn’t performing as well as expected, you can add corn nematodes to your checklist of possible causes.

We still have a lot to learn about managing these tiny plant parasites, but research is underway to get a better handle on the issue in Ontario. Researchers are surveying corn nematode populations, testing some new and upcoming nematicides, and figuring out how to integrate these products into a full disease management system for corn crops.

Nematodes are microscopic, worm-shaped organisms. There are thousands of species and some are plant parasites. More than 60 species of corn nematodes are found in North America. In Ontario, the most common type in corn is the root-lesion nematode (Pratylenchus species). Corn nematodes can be grouped into two categories: endoparasites, which live most of their lives inside plant roots; and ecto-parasites, which live in the soil and feed on the outer parts of the roots. Root-lesion nematodes are endoparasites.

Corn nematodes feed on corn roots, reducing the plant’s ability to take up water and nutrients. As well, wounds from nematode feeding provide places where pathogenic fungi and bacteria can enter the roots, causing disease.

It is difficult to diagnose corn nematode problems without a lab test. Not only are nematodes invisible to the naked eye, but the plant symptoms are easily confused with other problems. Above-ground symptoms typically include stunting, yellowing and uneven stands, which may look like such problems as poor nutrient levels, herbicide injury or damage by other pests. Root symptoms may include lesions, discoloration, lack of root hairs and/or stunted root growth, which might be confused with problems such as rootworms, root disease or fertilizer burn. The exact plant symptoms depend on the nematode species; some species have much greater potential for corn yield impacts than others.

“Some of the symptoms to watch for are yields that are declining in certain areas or have not been keeping up with what would be expected and that can’t be explained by other factors. Also watch for areas that are stunted, have yellow leaves or have a susceptibility to stresses such as leaf diseases, stalk rots, dry weather and things like that,” says Albert Tenuta, field crop plant pathologist with Ontario’s Ministry of Agriculture and Food (OMAF) and Ministry of Rural Affairs (MRA). He is involved in corn nematode studies in Ontario as well as regional studies with U.S. researchers.

Tenuta has been leading surveys since 2009 to try to determine the overall impact of nematodes in Ontario corn crops. “In our surveys over the past few years, with OMAF and MRA and our industry partners, we’ve seen much higher corn nematode numbers than we expected in terms of percentages across most of the province, particularly for types like the root-lesion nematode,” he says.

“Roughly 25 to 30 per cent of the fields are at or above thresholds for root-lesion nematodes. That is quite surprising, but it’s also in line with what other areas are seeing – the Great Lakes corn states and the Mid-West Corn Belt are seeing very similar numbers. It’s also surprising that the numbers are pretty uniform across a wide geographical region.”

He adds, “That’s not to say they are at high levels everywhere, but root-lesion nematode numbers are fairly constant throughout the province. With that, there is always concern with their potential impact on overall plant health and yield.”

The widespread presence of corn nematodes found in the surveys suggests these pests have been present at some level in Ontario cornfields for quite a while. However, they seem to have become a growing problem in recent years.

“Changes in agricultural practices and management tools may have resulted in higher nematode populations or increases in their ability to become more problematic,” Tenuta says.

Yield impacts in a particular cornfield will depend on the nematode species and populations in the field as well as such factors as soil type, moisture and temperature conditions, cropping history, tillage and pesticide practices.

“The yield impact of corn nematodes can range from less than a bushel per acre up to 20 or 30 bushels per acre, and in some severe cases it could be substantially higher, particularly in sandy knoll areas of fields that have other issues as well,” notes Tenuta.

He adds, “One of the primary attributes of many of these nematodes – and plant pathogens in general – is that they are very opportunistic. If there are any other stresses or conditions that are unfavourable for the plant, they are able to utilize that. So areas of a field with stress conditions are the areas where you’ll see the biggest nematode impacts.”

Nematode management study
Nematodes are an emerging issue in corn crops, so management practices aren’t as well established as they are for soybean cyst nematode. Tenuta and his colleagues are in the early stages of putting together all the pieces needed for integrated management of corn nematodes, such as evaluating the effectiveness of new nematicides, determining genetic resistance among corn hybrids and fine-tuning economic thresholds for damage in corn crops.

From what Tenuta has learned so far, crop rotation alone is probably not going to be an effective control option in Ontario. “Unlike soybean cyst nematode, which is specific to soybeans and edible beans, many of the nematodes that are affecting corn also affect other field crops, horticultural crops and many native plant species, including weeds. Root-lesion nematode, for instance, can affect soybeans, corn and wheat, so by rotating those three crops you have a susceptible host each year,” he explains.

Tenuta is currently leading a project to evaluate several tools for nematode management in corn and soybean, with field trials at two Ontario locations. He is collaborating with extension researchers from the U.S. and Tom Welacky of Agriculture and Agri-Food Canada in Harrow, with support through the Grain Farmers of Ontario, who obtained partial funding through the federal government’s Canadian Agricultural Adaptation Program (CAAP) delivered by the Agricultural Adaptation Council in Guelph.

The corn trials in this project are testing various nematicides. These include Votivo, which is a recently registered seed-treatment from Bayer CropScience, and other seed treatment or in-furrow products that could be registered for use in Canadian corn crops in the near future. In addition, the trials are assessing how these nematicides function in combination with insecticide and fungicide seed treatments and other tools that contribute to healthy corn crops.

Tenuta hopes to determine how best to integrate all these tools into a complete disease management system for corn nematodes and other corn pathogens.

Corn nematode management tools, such as the seed-treatment nematicides, are a relatively new area that is gaining increasing attention from agricultural input companies. Tenuta says, “It’s a much-needed area that hasn’t had a lot of attention in the past. I think it’s a great opportunity to help Ontario agriculture and minimize the potential losses due to nematodes, and tie that in with genetic resistance, integrated pest management, best management practices, and all of those other tools that we have available.”

Not surprisingly, the project’s preliminary results indicate that benefits from the seed-treatment nematicides depend in part on the nematode types and populations in the field. For instance, yield response to Votivo has ranged from no benefit to about 15 bu/ac, with the greatest benefits in areas with high populations of the more damaging nematode types. Average response is about four to five bushels per acre.

Another important result is that yield responses to some of the nematicides are influenced by the corn hybrid. “We’ve seen a response in certain hybrids consistently over two or three years that may indicate some type of genetic tolerance to corn nematodes in some of the genetics,” notes Tenuta. These results could be a starting point for seed corn companies to develop nematode-resistant hybrids.

The project is also helping to increase awareness of corn nematode issues. Tenuta says, “Probably the most important aspect of the project so far is that we’re getting a lot more calls from producers, crop consultants, ag retailers and seed companies about situations where growers who, for one reason or another, have seen a decline in their corn yields in certain fields.”

Tips for growers
“Growers should evaluate their fields every year to assess the existing problems, risks and potential problems. Nematodes are one of the things you need on your checklist. If you see declining yields in areas of a field where you’ve already considered and eliminated problems with factors like fertility, soil structure, and so on, then those areas may have a nematode issue. Those are the fields to target and potentially sample for nematodes,” explains Tenuta.

To diagnose a corn nematode problem, you need to sample both the soil and corn roots. Samples should be sent to a nematode lab. In Ontario, nematode labs include the University of Guelph Pest Diagnostic Clinic, SGS Agri-Food Laboratories and A&L Canada Labs Inc. Information on sampling and handling procedures is available on the OMAF website and from your nematode lab.

Thresholds for economic damage by some common nematodes are listed on the OMAF website. If your samples exceed these thresholds, you could consider taking steps to reduce stresses on the corn crop, such as ensuring proper fertility, maintaining good weed control, and controlling other pathogens.

As well, you could consider a strip trial with a seed-treatment nematicide. Tenuta says, “One of the most critical places for field validation of new products is a grower’s own fields. Every field is unique and has specific conditions. You always want to evaluate these products or management tools under your own specific conditions.” 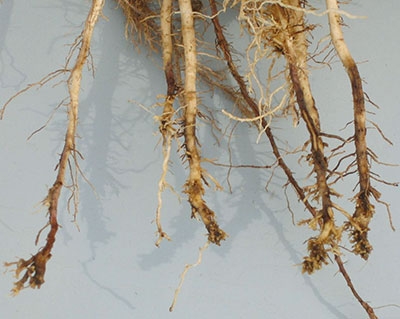