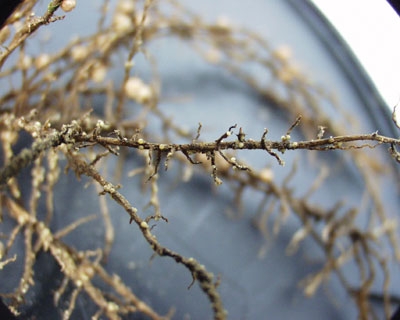 Before long, a new method for battling nematodes will be available to Canadian farmers, and its arrival will come none too soon. “We’ve identified more types of nematodes in the US and Ontario and it’s a big concern,” says Albert Tenuta, field crops pathologist with the Ontario Ministry of Agriculture, Food and Rural Affairs. He notes that there has been a void in the overall crop management platform in terms of controlling these pests. For years, all that farmers have been able to do was rotate their crops and plant resistant varieties, but the former has been found to be almost completely ineffective on its own, and the latter needs improvement.

“Populations of the root lesion nematode, which affects corn, tobacco, wheat, potato and other crops, are not affected by crop rotation, and it’s also well known that rotating away from soybean doesn’t reduce the impact of soybean cyst nematode either,” says Luc Bourgeois, research and development manager for horticulture and row crops at Bayer CropScience Inc.(Canada). “Nematodes are a yield robber in many crops, but corn and soybean represent the biggest potential yield loss in field crops.”  The use of resistant varieties certainly helps, and switching varieties from year to year is a wise idea, but development of more resistant genetics is sorely needed. “It’s important to remember that no resistant variety will repel every type of SCN (soybean cyst nematode), and current resistant soybean varieties have one of two genes that confer some resistance, which is a rather precarious situation as nematodes are starting to overcome the resistance,” says Tenuta.

In corn, the situation is much more dire, however. Tenuta says corn hybrids have yet to be studied for the degree of resistance and resistant genes have not been identified either. “In the future,” he says, “hopefully that will be rectified, and in both corn and soybean, we’ll see more resistant genes and different genes incorporated into the same plant.”

New control method
Nematicide seed treatments, a new mode of action, are therefore a promising and welcome new option. “The need from an industry standpoint is there, and the sooner we can get them registered in Canada, the better,” notes Tenuta. “Some work better than others, and there are a number of very promising ones.”

The decrease in nematode pressure that the treatments provide mean better plant health and, depending on variety and location, a yield improvement in corn and soybeans of up to 15 percent or better. Soybeans from nematicide-treated seed show reduced symptoms of stress and better maturation. Tenuta adds, “There is definitely a beneficial synergism with fungicides, insecticides and nematicide treatments. They seem to help each other.”

In participation with the US North Central Soybean Research Program, and with funding provided by the Grain Farmers of Ontario through the Farm Innovation Program (a component of Growing Forward), Tenuta and colleagues in the US and Canada such as Agriculture and Agri-Food Canada’s (AAFC) Tom Welacky have just completed the first year of a three-year project to test various nematicide seed treatments against SCN. The study involves 26 sites in 12 US states and Ontario.

Some of the seed treatments in the study are experimental and some are registered for use in the US. Some of the treatments are chemical in their makeup, and attack nematodes directly, while others are biological. “Biological nematicides consist of bacteria, such as Rhizobacteria, that grow with the plant’s root system and protect the soil-root interface,” Bourgeois explains. “The bacteria feed on the root exudates, which are what attracts nematodes to the roots, so with the treatment, the signalling the nematode would usually get to let them know a root is there is not present.”

However, no biological treatments work perfectly, and nematodes can still run into the root by chance.

Since 2009, Bayer has developed a biological-based seed treatment called Votivo, which was registered in the US during the winter of 2010-11, and first sold in the US this past spring. It works in both corn and soybeans, and Canadian registration is hoped for in early 2012. When asked about cost, Bourgeois explained that Votivo is sold as part of Bayer’s Poncho seed package, and it is therefore very hard to tease out how much of the total cost covers different seed treatments and the genetics of the seed itself. “It was a big learning curve to develop Votivo,” he notes. “Nematodes are tiny and hard to work with, and it’s also an area of research that is lacking in experts.”

He says many nematologists have retired, and hopes that universities and AAFC will place importance on starting to cultivate a new generation of expertise. Because nematodes are such a big concern, Bayer is also screening a range of other potential products, both biological and chemical.