Can corn seedlings detect their environment? Do they adjust to environmental changes and stresses? And can they communicate with weeds? These are just a few of the questions that Clarence Swanton, a professor at the University of Guelph’s department of plant agriculture, has been working on. Swanton and his team believe that plants can detect stresses in their environment. Each time stress happens, the plant’s focus shifts from development to damage control, and that shift results in irrecoverable yield loss.

Stress is caused by plant density, particularly in short-season varieties, and competition for resources such as light, water and nutrients, as well as non-direct sources of competition. So what kinds of stress cause yield loss in corn? Swanton has researched each type extensively and presented his findings in the summer of 2013.

High-density corn
In a particularly wet year, Swanton was forced to make a decision come planting time. He could either stick with the hybrid he knew or switch to a new, shorter-season variety. He chose to switch, but the switch produced differences: in particular, he noticed lower leaf development and lower yields. It was then that he realized that little work had been done on planting density in shorter-season varieties.

“Now keep in mind the price per unit of corn,” says Swanton. “Always keep that in mind when you hear this density story.

“Number-wise, it says there’s a difference, but statistically, there isn’t,” he continues. “I put 12,000 more plants in the ground, planted on the first of June, and it made zero difference. Think of the price of a unit of corn.”

So the big question is this: Where did the yield go? Why is it not possible to put more plants in the ground and consistently get higher yields?

Swanton says there’s clearly a hybrid effect, and some hybrids “flatline” at certain densities. He’s the first to admit that he doesn’t have all the answers but says looking at it from another perspective has provided some interesting conclusions.

“We are looking at that question from a molecular standpoint, from a physiological standpoint and from a whole-plant and agronomic standpoint,” says Swanton.

The effects of plant competition
Plant competition for resources such as water, light and nutrients plays a major part in yield loss. But more non-direct sources of competition affect plants as well, says Swanton.

“One of the things that amazed me was that even if you control the weeds really early in the cycle of a plant, the yield potential of that crop is changed,” he says. “It’s on a totally different trajectory. Even though you’ve done it very early and you still have 90 per cent of the growth ahead of the plant, you have – within a few days or a few leaf stages – affected the actual growth and yield potential of that plant.” That is to say, that yield loss is permanent and never comes back.

In a series of experiments using perennial rye grass, Swanton discovered that shade avoidance, for instance, affects plants on a physiological level.

While we tend to think of plants as stationary, they do have the ability to detect their environment, Swanton says. “They are moving and sensing and changing their environment in an incredible way.

“The far red reflecting off of the weed surface is picked up by phytochrome in the actual corn plant, and that triggers a whole cascade of biological and physiological changes that occur in the plant,” he says.

When a corn plant detects a weed in its vicinity, two things happen: anthocyanin production decreases and lignin production increases. The importance of these two cannot be understated. Anthocyanin acts as a sunscreen for the plant, protecting it from sun damage, and as a powerful antioxidant that helps with disease resistance.

In the presence of weeds, a corn plant will also increase its production of ethylene, which causes it to age and hinders plant recovery. On top of that, Swanton noticed an explosion in free radicals, particularly in hydrogen peroxides.

“These free radicals are found normally in plants. They’re a byproduct of metabolism and they play an important role in cell signalling and maintenance of physiological stability in the plant,” Swanton says. “Under stress, there’s a threshold, and suddenly rather than being a facilitator of physiology, it turns into a damaging component.”

At this time, the exact threshold is unknown, but the damage it causes is obvious. “It damages DNA, proteins, and lipids, inactivates enzymes, alters plant metabolism, and you actually close the stomatal, and then as a result you get photosynthesis down. You get a whole series of things happening all because of that explosion of free radicals.”

A new look at seed treatments
Swanton believes that each time a corn plant diverts its energy to repairing damage or addressing stress, yield is lost – permanently. Interestingly, though, in the presence of seed treatments, plants reacted differently. Seeds treated with thiamethoxam, he says, did not see this shade avoidance effect at all.

“Everything that we know about how plants react physiologically under stress and pressure is negated when seeds treated with thiamethoxam are used.”

In fact, Swanton thinks this could lead to some interesting possibilities in terms of triggering genes, taking the role of crop protection to new levels. 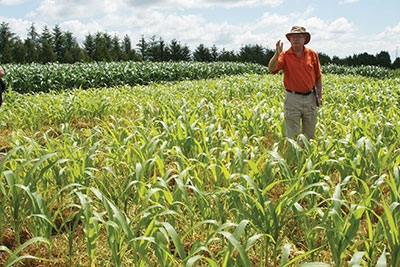 Even when weeds are controlled at very early stages Can corn seedlings detect their environment? Do they adjust to environmental changes and stresses?