Features Agronomy Fertility and Nutrients
Timing is everything

Current yield trends in Ontario dictate a continued move away from wheat into more and more acres of corn. “While winter wheat yields are increasing by 1 bu/ac each year, corn is increasing at double that rate,” says Peter Johnson, the provincial cereal specialist with the Ontario Ministry of Agriculture and Food (OMAF). “If wheat yields cannot gain on corn in relative terms, wheat will disappear from the rotation in Ontario.”

Johnson’s colleague Dr. Dave Hooker, a field crop agronomist and assistant professor at the University of Guelph Ridgetown Campus, says this development would have huge impacts on long-term yield stability, as wheat in the rotation in Ontario can increase corn yields by 30 bu/ac, and soybean yields the second year after wheat by 6 bu/ac. It is therefore imperative to find ways to maintain wheat profitability.

The first step in this quest required a close look at Ontario’s climate. “When we compare the world’s highest winter wheat yield environments to those in Ontario, it’s clear that yields are limited here because of high temperatures during grain fill,” Johnson explains. “This often causes the canopy to senesce prematurely, which results in grain fill relying on reserves stored within the canopy.”

The good news is that researchers have found these limitations can be partially overcome through a variety of practices, including management of crop canopy during early development; early planting dates; seed-placed fertilizer at planting and additional nitrogen fertilizer during rapid growth; application of fungicides to protect green leaf area; and choice of wheat variety.

Johnson notes there has been little investigation in Ontario on split nitrogen applications, high plant populations and starter fertilizer effects, coupled with high N rates and fungicide inputs. “In managing their crop, growers need to consider both additive and synergistic effects of these practices on yield and profitability, understanding that the current recommendations are based largely on simple effects alone (each input looked at separately),” he says.

Johnson and his colleagues, in a project known as SMART 1, observed yield increases of up to 20 per cent with strategic use of nitrogen and fungicide. SMART 2, which ran from 2011 to 2013, focused on investigating additional management options: split nitrogen applications, plant populations, and starter fertilizer, and their interactions. “SMART 1 identified split N applications with intriguing yield increases that required further investigation,” Johnson explains. “Plant populations were evaluated at normal yield levels, but higher yield levels may change the optimum. Starter fertilizer benefits may be of increased importance as well, as yields move higher.”

Johnson says the results of the project will be used for calibrating and validating existing crop models, updating the recommendations currently in OMAF’s Agronomy Guide for Field Crops, and developing web-based calculators to assist decisions by growers and industry on SMART management decisions. Funding was provided by Grain Farmers of Ontario and the Farm Innovation Program.

In 2011, weather made the late application of the early-late split far too late, causing reduced yields. “We had an application in mid-March, and a ‘normal’ split on April 20, and we found a one- to two-bushel increase from that, because the second application was put on earlier than ideal,” Johnson explains. “In 2012, we were able to ‘nail’ the timing, and the early-late split added 7 bu/ac on average compared to one application or early-normal split at both the 90 and 150 kg of N per hectare rates.” There was a boost of about 0.7 per cent in protein as well.

In 2013, it was wet in April, and therefore growers didn’t get any N applied until May. “As in 2011, weather again made our splits in some trials later than preferred, and results were back to little yield advantage,” Johnson observes.

“My standard recommendation is going to be split N applications: 50 pounds any time after March 15 to 20 to kickstart the crop – to save or promote tillers – and to then apply the balance at Growth Stage 31-32 (first to second node).” He says high populations in these trials have added little to final yield, while starter fertilizer benefits continue to be extremely beneficial.

In SMART 2, Johnson and his colleagues also evaluated the “N stamp” concept, a relatively new infield method developed at Oklahoma State University to assess nitrogen response and predict nitrogen needs. A strip is fertilized with incrementally increasing rates of N before or shortly following spring greenup and visually inspected in mid-season to identify the N rate required for maximum biomass production. The lowest N rate yielding the maximum mid-season forage production or level of “greenness” provides an assessment of the rate of N required to achieve optimum grain yield. Johnson reports that the N stamp concept continues to be investigated. 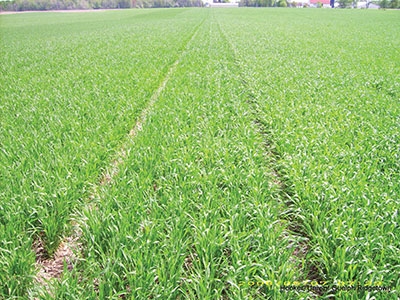 Peter Johnson Current yield trends in Ontario dictate a continued move away from wheat into more and more acres of corn.